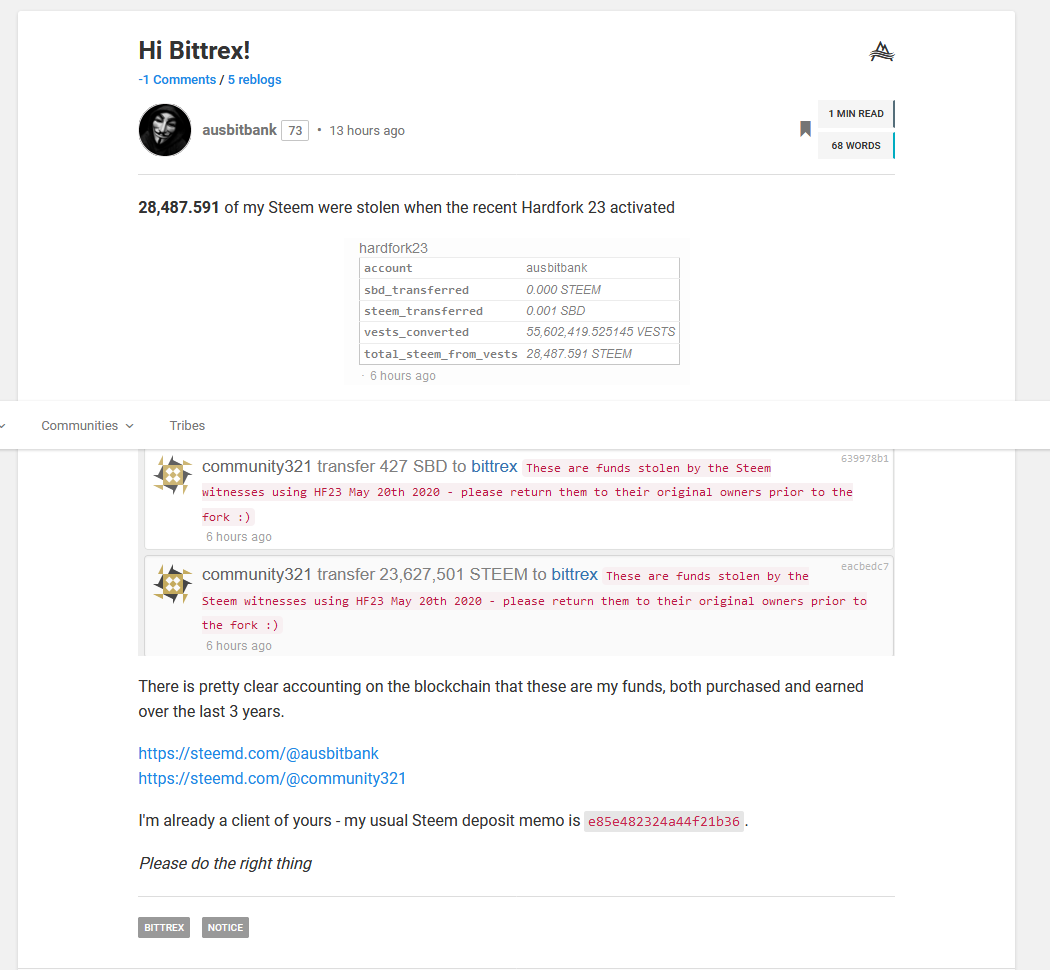 CLAIM FOR DAMAGES INCURRED AS A DIRECT RESULT OF THE LAST HF (aka HF23) implemented on the 20th of May 2020.

As a result of the last HF initiated and implemented by a group of individuals who clearly had premeditated the acts committed many living men and women (as per the definition by Common Law) have been put into a situation by which we have incurred financial damages.

One such example is crystal clear, although those persons or companies responsible for access to the Steem blockchain have done whatever is possible within their capabilities to hide these facts.

So here is a snapshot of one such crystal clear case:

However, for those of us who have not had our cryptocurrency stolen from us via the malicious premeditated and organized HF involved in the group of individuals (and possibly US companies) who partook in the HF, we too are now in a position by which we are victims and have incurred both direct and indirect damages.

As a result of the announced HF, prior to the act itself, the following Exchanges ceased the ability for us owners of the relevant cryptocurrencies to transfer and cash in on our cryptocurrencies:

They covered themselves by doing so, in a way that ensured that they are not part of the HF (act) in any way manner or form.
Obviously they did this for good reason, as no respected registered business would risk their relevant licenses by partaking in any (potentially) illegal activity.

None the less, this has now put all of us who own the relevant cryptocurrencies STEEM & SBD in a situation where we are unable to obtain assets which we would have been able to do if it wasn't for the HF (act).

Further more, for those of us who do not wish to have anything to do with those who are involved with the HF (act) and its participants, utilizing any other exchange which has direct or indirect business relationships or who have actually partaken in any actions that have lead up to this HF (act) is not an option.
For if we were to do so, we would be putting our own reputations at risk.
Trust is something that takes a lot of effort and time to build, yet risking that reputation which is trustworthy can not have a price to it.

So we are now literally put into a position whereby we are victims of the HF (act) in that we have lost any and maybe all possibilities of obtaining the assets that we could have obtained prior to the HF (act).

This is definitely not something that should be taken lightly, as it all falls under US Federal Jurisdiction.

For those who do live in The USA and are law abiding citizens, you do have the responsibility to report everything that may be a criminal activity.

The total of the damages incurred to the parties from which funds were stolen equates to over $6,000,000 USD. (as per current figures).

The total of funds now stuck in limbo (such as mine) most likely also add up to multi millions of USD.

Hence, this claim is being made public, in the hope that the relevant authorities take action as per their jurisdictions.
&
that the damages incurred to all of us victims of this HF (act) be rectified.

This absolutely sucks. Which I'm glad we have Hive to fall back on, but it shouldn't be that way. So for those of us that still have access to our funds, what do we do? Power down and try to Gtfo asap? But of course many have already started, so the price will probably be terrible. Of course, you have to find an exchange too.