Owned and managed by @buildteam.

As you can probably guess, this post is going into "MinnowBooster",

I wonder what could have given it away!

Prior to continuing this post I must make the following notes:

This post is part of a series of posts and all posts in this series that have been published prior to this post are to be considered as a part of this post.

Including but not limited to all the notes, definitions, terms and conditions specified in Bots:
FACTS & FIGURES. (Part One) .

It is understood (& agreed upon you) that by reading this post you (the reader/viewer) have understood this and have read the prior publications within this series (A list of which shall be provided on each and every post within the series.) and that you understand and agree to the terms by which I am publishing these posts.

As described in the previous post in this series, MB offers a service to help promote all posts and likewise maybe earn a few extra Steem along the way.

Well I gave this little picturegram to help explain it without writing a four page essay about it all: 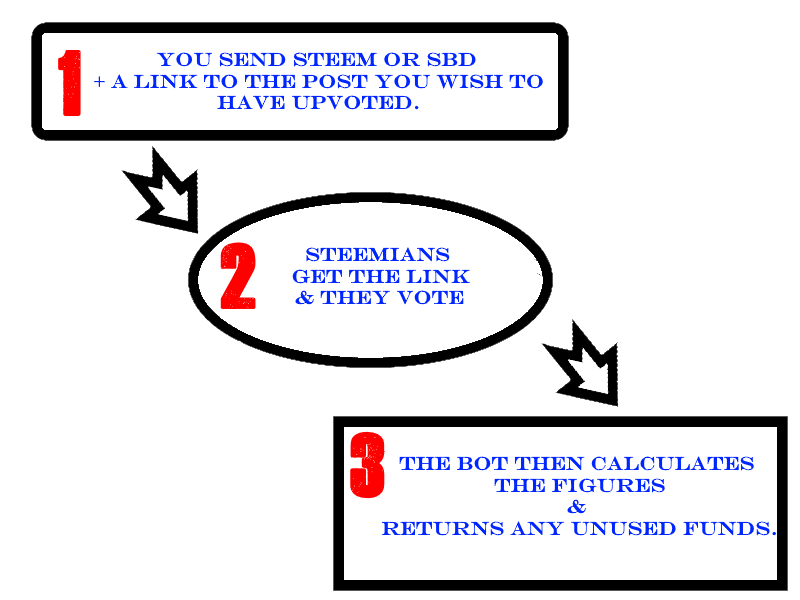 So as you can see, it is all about people making their own decisions on if they will vote or not on a post.

Now, this could be compared to a "Bid Bot" in that a person sends funds over to MB and then MB forwards the post to the individuals interested in seeing what people would like votes on.

& yes, there is a business there, both the company and the voters get some of the funds sent over, so it is all a business transaction.

HOWEVER, this is definitely by all means a promotional tool and not a "bid bot".

As it is comparable to "direct marketing", as the information is forwarded to those who may be interested in reading and possibly upvoting what others want to promote and have seen.

To make it better, the company returns any funds that are not used.

Now, What does that mean?

It means that MB guarantees a certain cost+ "%" on the upvotes.

The upvotes you get will be worth more than $5SBD at the time of voting.

So it is by far the fairest model of paid promotions and eventual paid for upvotes out there on the market.

Hats off to Buildteam for this concept.

Now for those who are not familiar with Buildteam, this is one of the longest running companies offering services for Steemians in Steem and SBD.

Yes, that is right.

Apart from this promotion/voting services, they also have other services out there, but they are not part of this series of posts, here we are only concentrating on the "paid voting services" out on the market.

Based on everything seen and tested, MB is definitely a service that should be looked into by everyone interested in helping expand Steem and what all Steem has to offer us.

So far the Buildteam team, have done just that, added valuable services for Steemians.

As for the team itself and their names, I will leave that part to you to look up on their website, but for the two members of the Buildteam crew who are Witnesses for and on our Steem blockchain, @reggaemuffin and @thecryptodrive , I have nothing but words of respect as they have been persistent and consistent in their efforts to help take Steem to the moon.

Wish everyone a great day,

Til the next post in this series when we shall speak about "upvoting services" out there,

How do you mean they see the post first? Since it is automated the vote goes out first then the voter has the option to remove a vote after the fact. I think that is a slight difference since if it was approval first then vote that would make a difference. Although not "Bid" it is still purely bot, with a flat fee.

From what I understood, the voters have an option to choose.