Travel to China with Jackey (1): The Forbidden City in Beijing 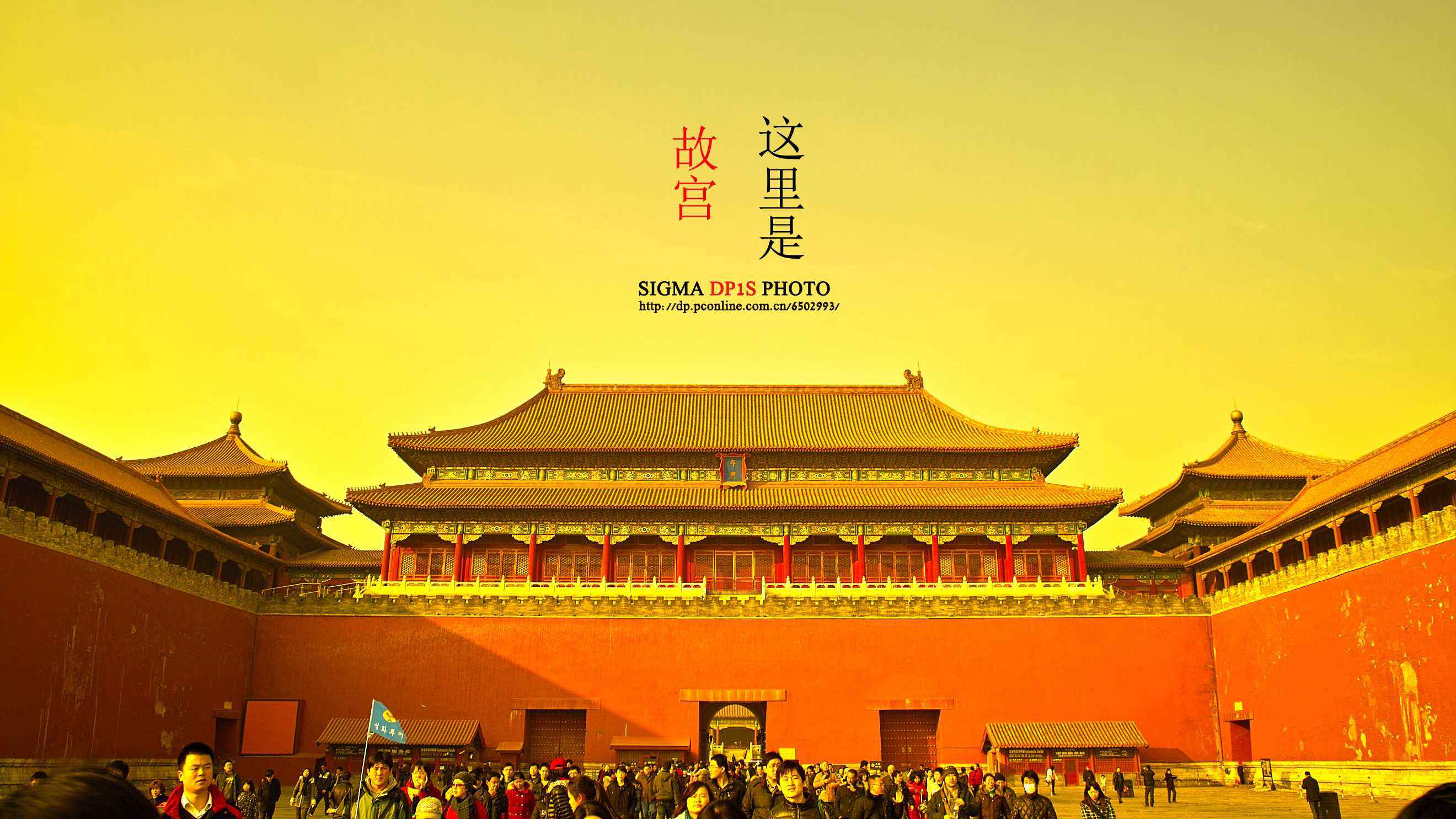 The vast majority of visitors to China will start their journey to China from its capital, Beijing, and the most famous and worthy of the attraction in Beijing is undoubtedly the Forbidden City.

​ The Forbidden City is the palace of the Ming and Qing dynasties of ancient China, and it is also the symbol and epitome of ancient China. When you are in the high-walled courtyard of style, you can truly feel the glory of it. jackey will lead you through the limitations of geography and experience the atmospheric Chinese history in this palace.

​ The Palace Museum in Beijing is the royal palace of the Ming and Qing Dynasties in China, formerly known as the Forbidden City, located in the center of The central axis of Beijing, is the essence of ancient Chinese palace architecture. Beijing Palace Museum to three palaces as the center, covers an area of 720,000 square meters, construction area of about 150,000 square meters, there are more than 70 large and small palaces, more than 9,000 houses. It is one of the largest and most complete wooden structures in the world.

​ Construction of the Forbidden City in Beijing began in 1406 and was built in 1420, based on the Nanjing Palace Museum. It is a rectangular city pool, 961 meters long north and south, 753 meters east-west width, surrounded by 10 meters high wall, outside the city has a 52-meter-wide moat. The buildings in the Forbidden City are divided into the outer dynasties and the inner court. The center of the hajj is the Taihe Palace, the Zhonghe Palace, the Baohe Palace, collectively known as the Three Palaces, and is the place where the country holds a grand ceremony. The center of The Inner Ting is the Qianqing Palace, the Tongtai Palace, the Kunning Palace, collectively known as the last three palaces, is the emperor and queen inhabited by the main palace.

​ Meridian Gate is the southern and largest gate of the Forbidden City in Beijing, China. Unlike the other gates of the Forbidden City, the Meridian Gate has two protruding arms on either side, derived from ancient que towers traditionally used to decorate the main entrances of palaces, temples and tombs. The gate has five arches. The three central arches are close together in the main, central section; the two flanking arches are farther apart from the three central arches, and are located between the central section and the protruding arms. The centre arch was formerly reserved for the Emperor alone; the exceptions were the Empress, who could enter it once on the day of her wedding, and the top three scholars of the triennial civil service examinations, who left the exams through the central arch. All other officials and servants had to use the four side arches.

​ The Taihe gate is the second major gate in the south of the Forbidden City in Beijing, China.The gate was originally built during the Ming dynasty, when it was called Fengtianmen . Following the Manchu conquest of China, the gate was given its present Chinese and Manchu names. The gate burned down in 1886 due to a fire started by a tipped lamp in the guard room. The present gate dates from the rebuilding after this fire, which was completed in 1894.

​ Hongyi Attic is located on the west side of the square in front of The Temple of Taihe, facing east, opposite the body Renge. Founded in the Ming Dynasty, the early Ming Dynasty called the Wulou, Jiajing when called Wucheng ge, the early Qing Dynasty changed to Hongyige. Qing Dynasty for the House of Affairs silver bank, deposit gold, silver, money, jewelry, jade, gold and silver ware and so on. The gold and silver ware used in the Emperor's Banquet was prepared from a silver bank and still handed over to the bank for storage.

​ Taihe Palace is the largest hall within the Forbidden City in Beijing, China. It is located at its central axis, behind the Taihe Gate. Built above three levels of marble stone base, and surrounded by bronze incense burners, the Hall of Supreme Harmony is one of the largest wooden structures within China. It was the location where the emperors of the Ming and Qing dynasties hosted their enthronement and wedding ceremonies. The name of the Hall was changed several times throughout the past few centuries, from its initial Fengtian Palace, later to Huangji Palace in 1562 and to the current one by the Shunzhi Emperor of the Qing dynasty in 1645.

​ Taihe Palace rises some 30 meters above the level of the surrounding square. It is the ceremonial center of imperial power, and the largest surviving wooden structure in China. It is eleven bays wide - of which the main room being nine bays wide - and five bays deep, the numbers nine and five being symbolically connected to the majesty of the Emperor.The six pillars nearest the imperial throne are covered with gold, and the entire area is decorated with a dragon motif. The Dragon Throne, in particular, has five dragons coiled around the back and handrests. The screen behind it features sets of nine dragons, again reflecting the "nine-five" symbolism. The Hall of Supreme Harmony features an exquisite throne made of red sandalwood, and formerly used by the emperors of the Qing dynasty.

​ Zhonghe Palace is one of the three halls of the Outer Court of the Forbidden City, in Beijing, China, along with Taihe Palace Baohe Palace. It is smaller than the other two halls, and is square in shape. It was used by the Emperor to prepare and rest before and during ceremonies.

​ Baohe Palace is one of the three halls of the Outer Court of the Forbidden City in Beijing, China, along with Taihe Palace and Zhonghe Palace . Rectangular in plan, Baohe Palace is similar to, but smaller in scale than, Taihe Palace. It was used for rehearsing ceremonies, and was also the site of the final stage of the Imperial examination. Both of these halls also feature imperial thrones, though to a slightly smaller scale than that Taihe Palace.

​ The Qianqing Gate is the main gate of the Inner Court of the Forbidden City, in Beijing, China. The gate once led people to Forbidden City's residential quarters.It is connected to the Qianqing Palace, and near the Gate of Thriving Imperial Clan.

​ Two gilded Chinese lion sculptures are installed outside the gate.

​ Qianqing Palace is a palace in the Forbidden City in Beijing, China. It is the largest of the three halls of the Inner Court , located at the northern end of the Forbidden City. During the Qing dynasty, the palace often served as the Emperor's audience hall, where he held council with the Grand Council.

​ Qianqing Temple is a double-eaved building, and set on a single-level white marble platform. It is connected to the Gate of Heavenly Purity to its south by a raised walkway. In the Ming dynasty, it was the residence of the Emperor. The large space was divided into nine rooms on two levels, with 27 beds. For security, on any one night the Emperor would randomly choose from any of these beds. This continued through the early Qing dynasty. However, when the Yongzheng Emperor ascended the throne, he did not wish to inhabit the palace occupied by his father for 60 years. He and subsequent emperors lived instead at the smaller Hall of Mental Cultivation to the west. The Palace of Heavenly Purity then became the Emperor's audience hall, where he held court, received ministers and emissaries, and held banquets. At the centre of the Palace, set atop an elaborate platform, is a throne and a desk, on which the Emperor wrote notes and signed documents during councils with ministers. A caisson is set into the roof, featuring a coiled dragon.

​ The Jiaotai Palace is a building in the Forbidden City, in Beijing, China. It stands between the Qianqing Palace and Kunning Palace. These three halls together constitute the centre of the Inner Court of the palace complex.The hall is square in shape with a pyramidal roof. Stored here are the 25 Imperial Seals of the Qing dynasty, as well as other ceremonial items, including the clocks that set the official time in the palace (first a water clock, later a mechanical clock, both still displayed in the hall.

​ Kunning Palace is a double-eaved building, nine bays wide and three bays deep. In the Ming dynasty, it was the residence of the Empress. In the Qing dynasty, large portions of the Palace were converted for Shamanist worship by the Manchu rulers. Thus, the front part of the hall featured shrines, icons, prayer mats, and a large kitchen where sacrificial meat was prepared. From the reign of the Yongzheng Emperor onwards, the Empress moved out of the Palace following the Emperor's move out of the Palace of Heavenly Purity. However, two rooms in the Kunning Tample were retained for use on the Emperor's wedding night. The wedding ceremony would be held in the main room, and afterwards the Emperor and Empress would retire to one of these rooms.

​ The Imperial Garden Ming Dynasty was called the "Queen Court" and the Qing Dynasty was called the "Royal Garden". The park was built in the Ming Dynasty in 18 years (1420), and was later added to the building, and still retains the pattern of its original construction. The park is 80 meters long north and south, 140 meters long east and west, covering an area of 12,000 square meters. The main building of the Royal Garden, The Qin'an Temple, is a heavy-roofed roof-top building, located on the axis of the Forbidden City, centered on the Qin'an Temple, to the south and east and west sides of the layout of pavilions. The bamboo, cypress and pine in the royal garden are dotted with mountain stones, forming a landscape of four seasons.

​ The gate was built in 1420, during the 18th year of Yongle Emperor's reign.The Gate was originally named "Black Tortoise Gate", but when Qing Dynasty's Kangxi Emperor, whose birth name was Xuanye , ascended to the throne, the use of the Chinese character Xuan became a form of naming taboo.

​ The gate is the back gate of the palace, and was used by palace workers.Women being sent into the palace for selection as concubines also entered the palace through this gate.

​ It is important to note that the Xuanwu Gate Incident, while sharing a similar name with this gate's original name, did not take place at this gate. The palace coup happened during the Tang Dynasty, when the capital was in Chang'an.