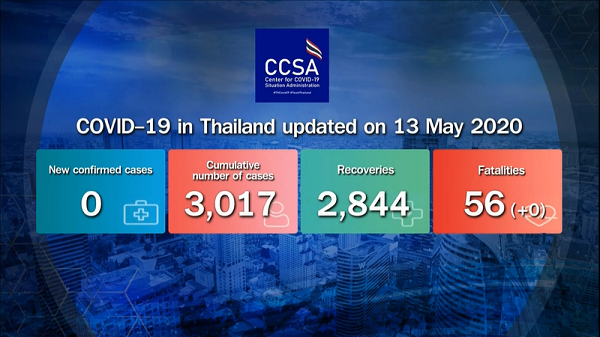 Whether or not this data can actually be trusted is another matter altogether but whether it is due to the rising unpopularity of the lockdown, or because actual headway has been made in controlling the virus, this news is good news as today marks the first time in months that no new cases of Covid-19 are reported in Thailand.

Now the very last post that i wrote was about how the media in this country basically isn't allowed to publish anything that is even more than mildly critical of the government, so if this figure was bad news, you better believe that it wouldn't be presented to us in a "failure of government" type of way. The way that rises in the past have been presented were always attempting to paint either foreigners as the culprits, or just the population not following government orders that was resulting in the spread.

But before I end up going on a anti-government rant I'll just say that this is very good news, regardless of whether or not it is 100% accurate.

As loud as the doom and gloom horns are sounding in the west about unemployment and the economic cost that the global shutdowns are having on those societies are, I can assure you it will be much much worse in developing countries like Thailand. Therefore, it is likely much more important that the economy get restarted over here than it is in places like USA.

The average wage over here in Thailand is just a few hundred dollars a month and people barely scraped by at those figures anyway. Introduce a couple of months of not working and you've got a pretty bad situation since chances are they were barely making enough money to survive month-to-month anyway.

One reason behind this quick recovery could be the fact that Thailand was already a very mask-oriented society anyway. I remember in my school that students that were a little bit sick would wear masks to school anyway even if they were not sick enough to justify staying at home. Introduce a global pandemic into the mix and basically everyone had a mask the next day.

That could play into it, I don't know. The end result is that this country bases a lot of it's GDP on exports and an opening back up of the economy is very critical. Their is also the aspect of 12% of the GDP being based on tourism, but I think it will be quite some time before we see any sort of improvement in that sector.

However you want to look at it, having zero new cases in a day and also pretty impressive recovery numbers (again, if they can be trusted) is a very good sign for the Kingdom of Thailand.

As they slowly open industry back up such as restaurants being open again (but for some strange reason not being allowed to serve alcohol still) has instilled the population with a great deal of hope and that is something that every country in the world needs right now.

So if these figures are accurate, or even close to accurate, I gotta say... Well done Thailand.

not that i am stalking your country or anything but i read somewhere that a few new cases just came out in the past few days.