Test your luck in a Thai pub 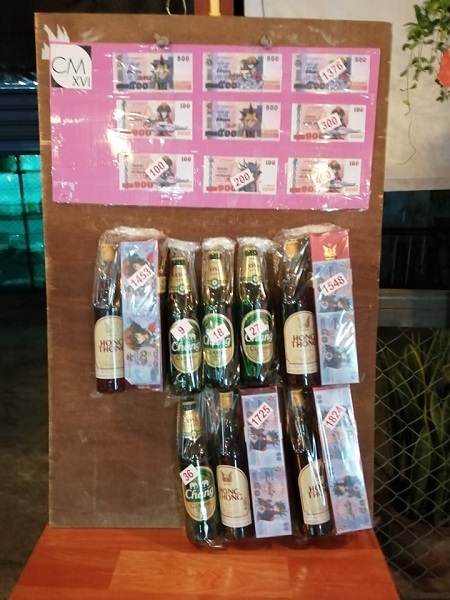 Gambling is illegal in Thailand, but there certainly seems to be an awful lot of it. The lottery is popular in a way that is almost unreal and many Thai people regularly play. There are the official government owned lottery and also some underground ones. I always find it funny when countries outlaw gambling.... but it's ok as long as the state is profiting from it.

I was in a small local pub that rarely has very many customers for just a few in the early evening when i noticed something on the wall.

As you can see there are a bunch of prizes with numbers next to them. The bottles of Chang Beer is not a great prize since you can buy it at this bar for 60 Baht but the bottles of whisky and of course the cash would be a great win. 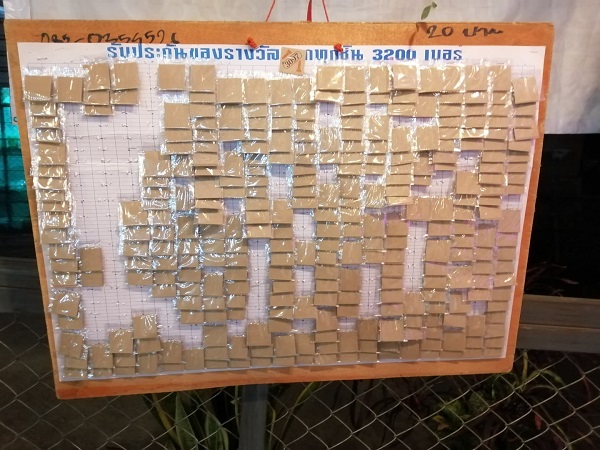 You can win by purchasing one of these tiny envelopes that have a few numbers in them, and if you get the right one, you win! I only played once and of course lost but one thing I noticed during the one hour or so that I was in the bar was the fact that this game is immensely popular. There was only 3 drinking customers but around 20 people came by just to play the game. One of them won the bottle of whiskey and that made him very happy. Who knows how many times he played before winning.

Like most games of chance, the odds are in favor of the house as every one of these games will likely result in around a 1000 Baht winfall for the house. Of course it could go terribly wrong and the winning numbers could all be selected before all the tiny envelopes have been bought, but according to the owner, that doesn't happen very often.

While this is technically illegal, I think it is one of those crimes that the police aren't going to ever bust because it is just harmless fun and there is so little money involved. I thought it was an interesting choice on the part of the bar owner. who is very likely making about as much off of the game as she is from the sales of booze!