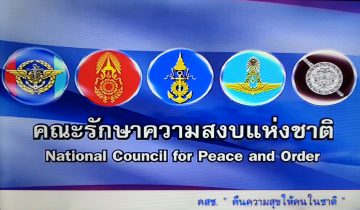 The media in Thailand isn't exactly a "free press" the way you might imagine it in the west. Criticizing the police, high government officials, and especially the monarchy are things that the media wouldn't dare do because the government will not tolerate such actions and have shut down the media outlets or taken control of news stations in the past if they do reports that the government deems is damaging to their control.

On the national satellite service, I have seen multiple broadcasts that have been interrupted by the above logo where whatever was being shown on the TV prior to this screen coming up was deemed to be "damaging" to the country.

There have been instances where foreign news broadcasts which were being only mildly critical of the election process going on where these broadcasts and eventually the channel (such as Fox or CNN) was blocked completely, regardless of what they were talking about.

So I think it is not much of a stretch to suggest that we are not really getting any sort of investigative reporting in Thailand, because any information apparently must be approved by the government. A recent article in the Bangkok Post, a paper that wouldn't dare to present the government in any sort of negative light, they told the stories of people that were pleased that things had been done the way that they were and are of course, delighted that the government is so interested in protecting them. They state that while it was difficult to be forcibly shut, they really appreciated the government handouts and financial support to help keep their business alive over the past 30 days.

The paper goes on to show pictures of bustling businesses operating with PPE that was provided by the government free of charge.

I can assure you that the mood on the street, for the average person, is very far from this. The government handouts are a myth for most of the Thai people that I know, and even if they are able to acquire the "stimulous" or whatever they are calling it here, it is some sort of pittance like 5,000 Baht for the entire month, which is around $150. This is no where near the amount of money that would be required to keep a business alive that has been forcibly shut for a month now.

The people I know with restaurants and cafes and what not, have received almost zero help from the government and laughed when I talked to them about the free PPE that the government is providing stating that this the real situation "is nothing like that... the government isn't doing anything to help."

The only "help" that these people say they have been given is by empathetic landlords who have discounted or eliminated any rent payments until the business is permitted to open completely. The people even lower on the societal totem pole have been relying on free food handouts and donations from temples and private charities.

I'm not trying to come down on the Thai government for doing a bad job. I am very aware, after just one year, that the government here in Thailand is financially incapable of taking care of 75 million people. At one point the Prime Minister reached out to the richest people in Thailand asking for financial help.

What I am saying is that there is zero chance that any of the registered media companies such as the Bangkok Post are actually telling the real story about what is going on here. They are telling an absolute candy-coated fantasy. I don't know who they are trying to sell this story to though, because the people that this newspaper is sold to already know what is really happening. The only thing they are doing is tarnishing their own reputation.