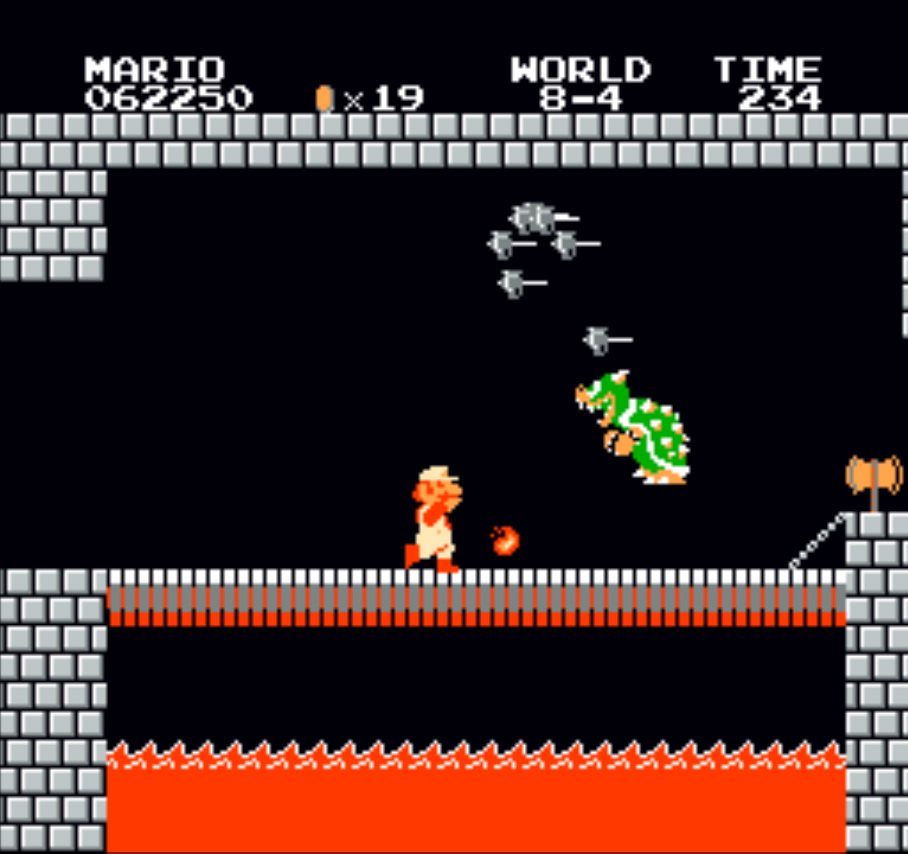 How to Beat Mario without a Game Genie- just in case you forgot these are the other easy ways of beating the game without cheats. The best methods are below!

1. Just hold A then press start at 1 player (or 2 player) and you will start at the beginning of the world at which you died! Like you can start over on any world once you reach it (if you don't turn off the power or reset) like 2-1,3-1, all the way to 8-1 with 3 lives added each time. (This is technically in the manual and isn't cheating).

2. Infinite Lives Trick on world 3-1.
Wait for the first Koopa Troopa to go by. As the second nears the edge of any step, jump on it to drive it into its shell. Don't kick the shell, but leave it in place. Move to the step below the step you left the Koopa Troopa on. Walk up to the right-hand edge of the step so that Mario is directly next to the shell. Jump straight up. As Mario comes down, he should kick the shell toward the right. Mario will bounce back up after kicking the shell. If you've positioned the shell correctly, Mario will be coming down from his bounce just as the shell ricochets back to the edge of the step. Mario will land on the shell, kick it back to the right and bounce up again. You can get up to 128 before it resets back to zero after 129 and you must finish the level as well and not die. You can do this at other spots as well in game but are much harder.

3. Finding 1-Ups on each world you visit so you can go farther on more Lives and chances. 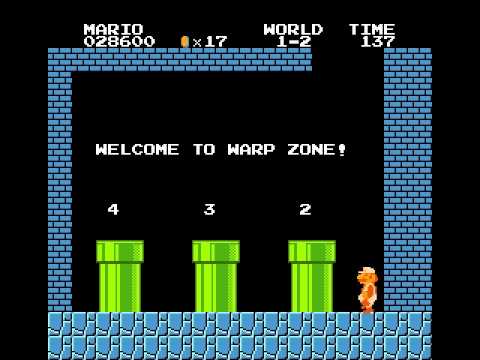 You just need the level warp at 1-2 to 4-1 at the end of the level jumping on top of the level bricks and going down the 3rd pipe.

Then you make your way to 4-2, you find the plant using the 2 hidden blocks you go up and get to the warp zone in the clouds. 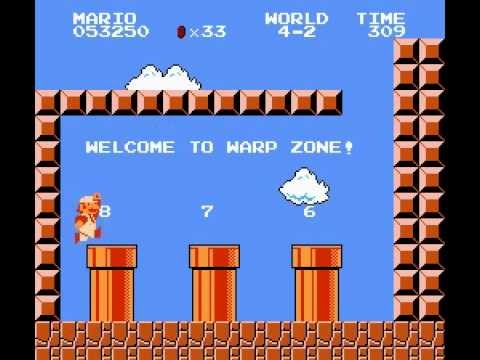 Once you make it to 8-1 you can easily make it to 8-4 over time and taking it slow, 8-3 is always a pain with the hammer brothers. You can watch the speed runs to get a better idea on how to win each level pretty easy. Most people have to use the infinite life glitch in order to beat it the first time.

Once you beat it you may want to play around with extra worlds and glitches and cheats. Here is some new worlds you can explore and there is more to be found even! These all take a game genie at the start of the game. 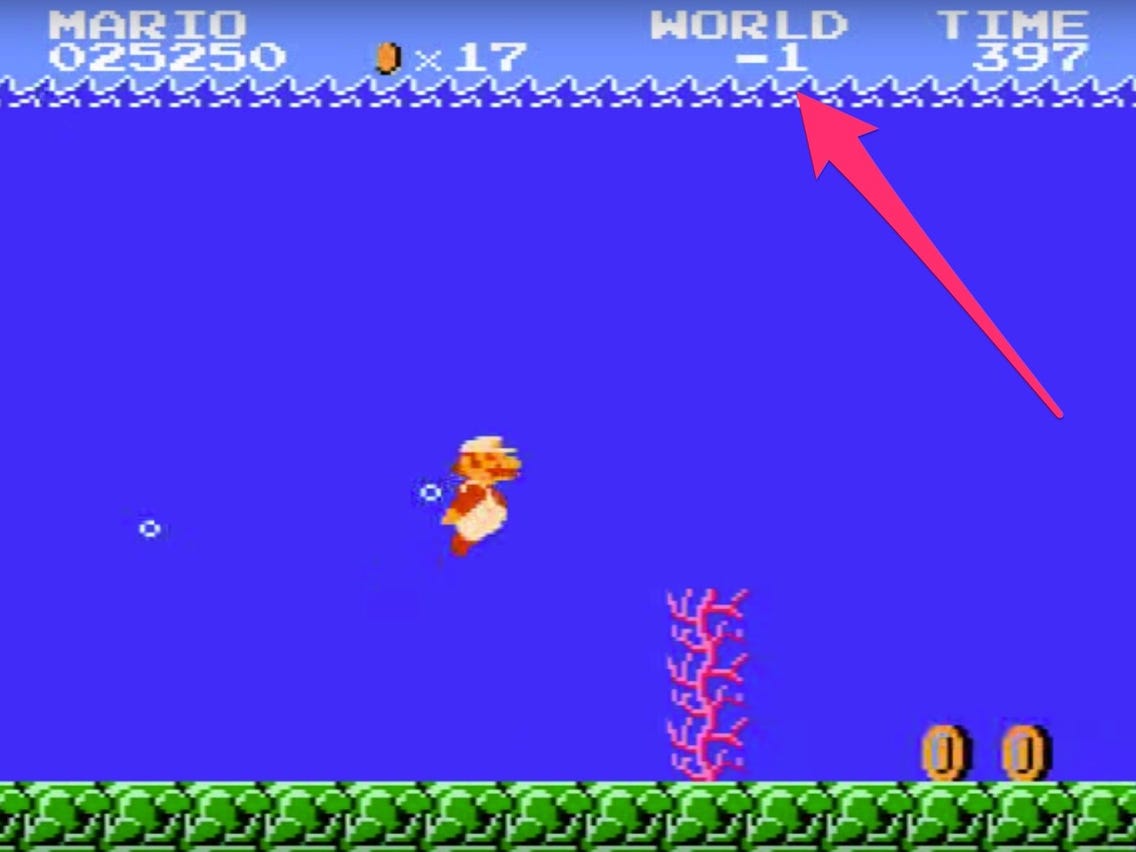 How to do the The "Minus Worlds" trick. (This doesn't require a Game Genie)
. At the very end of world 1-2, stand on the exit pipe that leads to the end of the level and 1-3. Break the 2nd and 3rd bricks from the edge of the pipe (in the ceiling), but don't break the brick directly touching the pipe. Stand on the leftmost side of the green exit pipe, jump straight up, and push backwards on the control pad. Mario will appear to jump backwards. You are going to try leaping backwards through the wall - it doesn't work if you're facing the wall. Once you walk through the wall, you will see the three pipes that are ordinarily the first Warp Zone. Enter the left pipe (the first one you reach through the wall) to reach world -1. Enter the middle pipe to reach world 5-1. If you step beyond the middle pipe, the words "WELCOME TO WARP ZONE" appear and the trick is negated - you can only reach worlds 2, 3, or 4 once the words appear. As I mentioned above, there is no practical point to reaching world -1. It's a water world that never ends. When you die or "complete" the level, you may find yourself appearing at the bottom of a pit (which means you should pump A as soon as your sprite appears to swim out). The layout is identical to 2-2. YSAOPE + YEAOZA : Level Select code (Just like after you beat the game the first time you can choose the world on the start screen but with more values past 8) This lets you start on any world you want! Here is how to get to the level select screen: When you first start out, you are in a new world (0-1) and you have to finish this level to get to the level select screen. Here's how: Swim (yes swim) past the first pipe you see and keep going until you see some water at the bottom of the screen. Swim over the top of the blocks that are above the water, but not too far. Then swim down and backwards a little to drop down through the little opening in the blocks that lets you get to the bottom of the screen. This part is very important because if you aren't at the bottom part of the screen, you won't be able to finish the level. Once you get to the lower part of the screen, just keep going to the end of the level. When you get to the end, it will say "Thank You Mario, but our Princess is in Another Castle". To get the game to continue, you have to press "B". Now your at the "Level Select" screen! Just press "B" until you see the world you want (at the top of the screen), and then press "Start".

SXIOPO - Infinite lives for both players
GOZSXX - Invincibility from Everything including Lava
LUIGIO weird graphics
GYAEVO Weird colors.
PINAOO Cool and strange colors
SZLIVO Small Fire Mario( The original SMB trick that involves having Fire Flower abilities and simultaneously jumping on Bowser and the axe at the end of any castle level and falling into the lava. If you time it right, supposedly there is a way to start the next level being small and having fireballs. )
STPENT x-ray vision shows where hidden blocks are.
YPEPNY - Bullet Bills throughout level, start w/ first Goomba
PAZSKO fun glitch
GETLYG Floating mario
OZTLLX + AATLGZ + SZLIVO - Always stay Super/Fiery Mario
ylyyya permanent ice skating mario
LUILUI - Instead of getting mushrooms you get Starman power food
PKPOKK - Clouds replace blocks
PKAOZP - Permanent Starman!! But sometimes you die after beating a level on a flag pole.
GIIIVY - Walk through pipes/blocks/walls
STAGEO - Goombas throw hammers
PIGOAP - Swim instead of jump

Many of these codes froze up after a while and quite a few actually crashed the emulator. Sometimes you can run more than 1 cheat at a time but that also freezes up often. You can find more cheats by searching the codes above for more pages as well or messing with the codes some but takes a lot of time. Feel free to let me know what you think or some of your favorite cheats below! Thanks for reading my article, hope you all enjoyed!

Insanity is doing the same thing over and expecting different results... I beat THE GAME over 30 years ago...