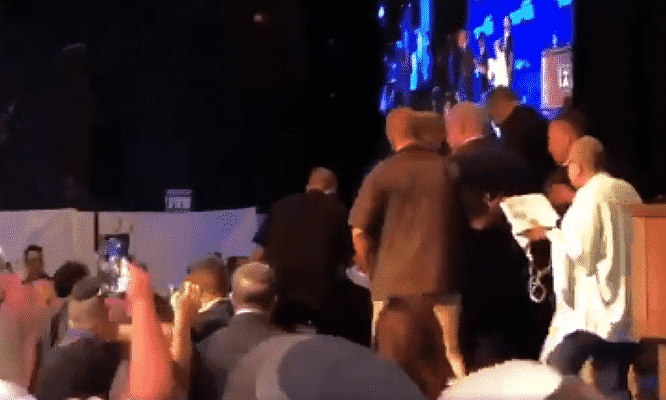 Israeli media said that five missiles were fired from the resistance in Gaza at the occupied cities, where Israel’s Netanyahu was giving a speech.

A video published by Israeli channel 13 shows Netanyahu fleeing the event. Reporter of the Israeli channel said that firing the missiles at the time was not a coincidence. The Palestinian resistance waited until the live streaming of Netanyahu’s speech started to fire the missiles.

Claiming Israel's leader not only fled but abandoned his audience in the process is clearly psychological warfare, designed to embolden the Gazan terrorists.

It is also a lie.

Here is the full video of the incident.

The video shows how Bibi is informed of the situation and then calmly explains it to the crowd, before security walks him off stage. He is no way "fled" or "abandoned" the crowd. In fact, he is the epitome of cool, calm, and collected.

In the meantime, terrorist leaders like Hamas' Sinwar and Hizbullah's Nasrallah threaten Israel from their underground bunkers in their soiled underwear.
Posted from Israellycool with SteemPress : https://www.israellycool.com/2019/09/11/psychological-warfare-as-palestinians-claim-israeli-prime-minister-fled-rockets-abandoned-crowd/
palnetisraellycoolbinyaminnetanyahugazahamas