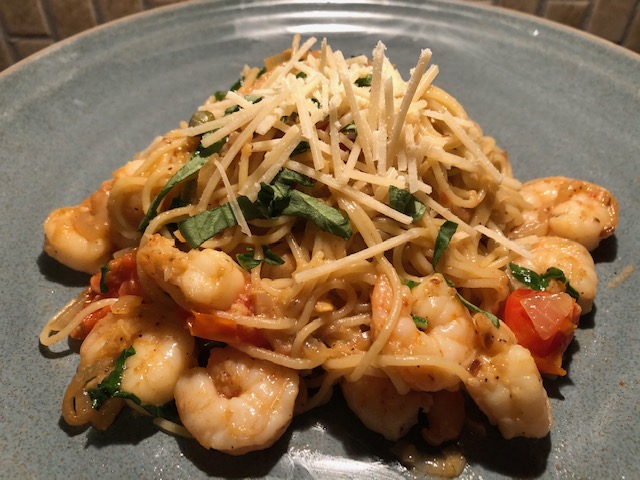 The wife was craving seafood, so I thought I would try my hand at an easy, yet delectable dish that I had never tried before...Shrimp Scampi. Easy it was and oh so very delicious, like, one of the tastiest meals I have ever made. We both were just shoveling it in our mouths and then went back for seconds, until everything was devoured sans a stray dried out noodle stuck to the side of the pot. I scraped him off into the sink for my homies, 'this one's for you Blue!'.

So howeasy, really, was this recipe? Well follow along and see for yourself :)

Get your pan up to med-high heat and throw down some olive oil.

Now if you follow a lot of my cooking, you've probably seen me use a lot of white onion, among other things. It's just such a great staple for most dishes, it lends itself easily to add flavor, a touch of sweetness, and depending on how you cook it, texture. But this recipe didn't call for white onion, rather, it's little brother, the shallot. So after you slice him up, throw em' in when the oil is nice and hot. You want a sizzle, but be careful not to burn them as they are a tad more delicate than the traditional white onion. I got pretty close on a few pieces being over done but caught it before it had gone too far.

As soon as the shallots hit the pan, go grab your already peeled garlic bulb and grate it over the top. After 2 minutes you should be ready to de-glaze the pan. Simply pour a little white cooking wine into the pan. This adds flavor but more importantly it un-sticks all the little bits of food stuck to the bottom of the pan.

Once the cooking wine is almost evaporated, it's time to add in the stock (it called for seafood considering I used Shrimp, but chicken or vegetable will do, I used chicken), chili flakes for a nice little kick in the pants, capers for some bite, cherry tomatoes that add a nice acidity, and lastly lemon zest and a squeeze of lemon juice.

While that is lightly simmering and reducing to create that amazingly flavorful sauce, get your shrimp seasoned up, S&P does the trick just fine. Feel free to add garlic powder or anything else you like with your shrimp, I just stuck with the basics as to not stray too far from the recipe.

Push everything to the sides and sear off your shrimp.

You don't want to overcook the shrimp, they should only take a few minutes to be cooked and then maybe another minute or so swimming in the sauce, so as soon as you drop them, get your angel hair noodles on the boil. Angel hair cooks fast, so keep an eye on it so it doesn't turn to soggy mush.

Mix it all up!

Then once your noodles are cooked, drain them and drizzle some olive oil in the pot and get the noodles nicely coated. I think in hindsight, this was a major factor in having really tasty noodles. I also added a little S&P to the noodles as well.

Basil Cigar anyone??? This is a neat trick to cut your basil fast and easy. Get the largest leaf and lay the smaller ones inside of it. Roll it up like a fat blunt, I mean, joint, errr, I mean cigar!!, yeah, cigar, that's what I meant, and get to chopping!

Throw the chopped basil in at the last minute. A quick toss to mix it all up, and then incorporate your noodles and get them sauced up as well. Sauced up like white girl wasted, no holding back.

Top it with some grated Parmesan cheese, and lastly, channel your inner food artist and plate the sumbitch like a pro.

And there you have it! Delicious, and I mean, DELICIOUS Shrimp Scampi. Give it a try yourself, won't you???

Happy #FFF y'all! Much love to all the supporters, competitors, and food lovers out there. I hope you all have a fabulous weekend, get out and enjoy life! Peace and love.

I get so p* off opening posts that mention some delicious food and find it is only a photo, or maybe there is a video...but no ingredient list, so it was a real pleasure opening your post. As a matter of fact, I have also bookmarked, so that I can use it whenever...

I hear ya man! I like to put directions/ingredients on my food posts, and I like to think I at least make the post fun to read, at least I hope I do :)

Thanks for chiming in, @arthur-grafo8, lmk if you end up giving it a go!

This looks so freaking good @intothewild. I’m totally down with the shallots too. I think they are much more fragrant than the older bro and I often forget about them. This week though, I bought some at the store have been using them with everything. I think you May have nailed it this week. Michelin stars right here friend!!! Bravo 👏👏👏

Michelin stars?!? Wowza! That would be a dream come true, maybe some day :) Thanks for the ridiculous compliments, @puravidaville! I'm loving shallots now too! Gotta use up the rest that I bought now, which I don't think will be a problem, haha.

I don’t know why the bag comes with so many. It’s been a staple in every dinner this week and I still have half a bag 🤦🏼‍♀️ Haha… “ridiculous compliments” well, the dish looks freakin good. What could I say?!? Next time I’ll call you a microwave maniac (or whatever the equally opposite to Michelin chef is) to even it out. Happy food fight @intothewild!

Thanks for the delicious-looking dish. And I love the basil cigar trick, it will work on mint and sage also when I need to chop those.

Hey @springwind46! Thank you so much for taking the time to swing by! Glad you enjoyed the post, and you are right!, any leafy green like mint or sage will do when using the cigar trick.

My goodness, that looks amazing. Thank you for showing how it’s done. I’d need a confidence boost before I attempted this.

Here's your confidence boost @shaidon, go do it! lol, thanks for swinging by!

Hey @intothewild, here is a little bit of BEER from @foodfightfriday for you. Enjoy it!