My Entry for the Redfish Rally Meme Challenge, March 2020 | Some Meme about Steem Terminal and Present Situation of Steem Blockchain. 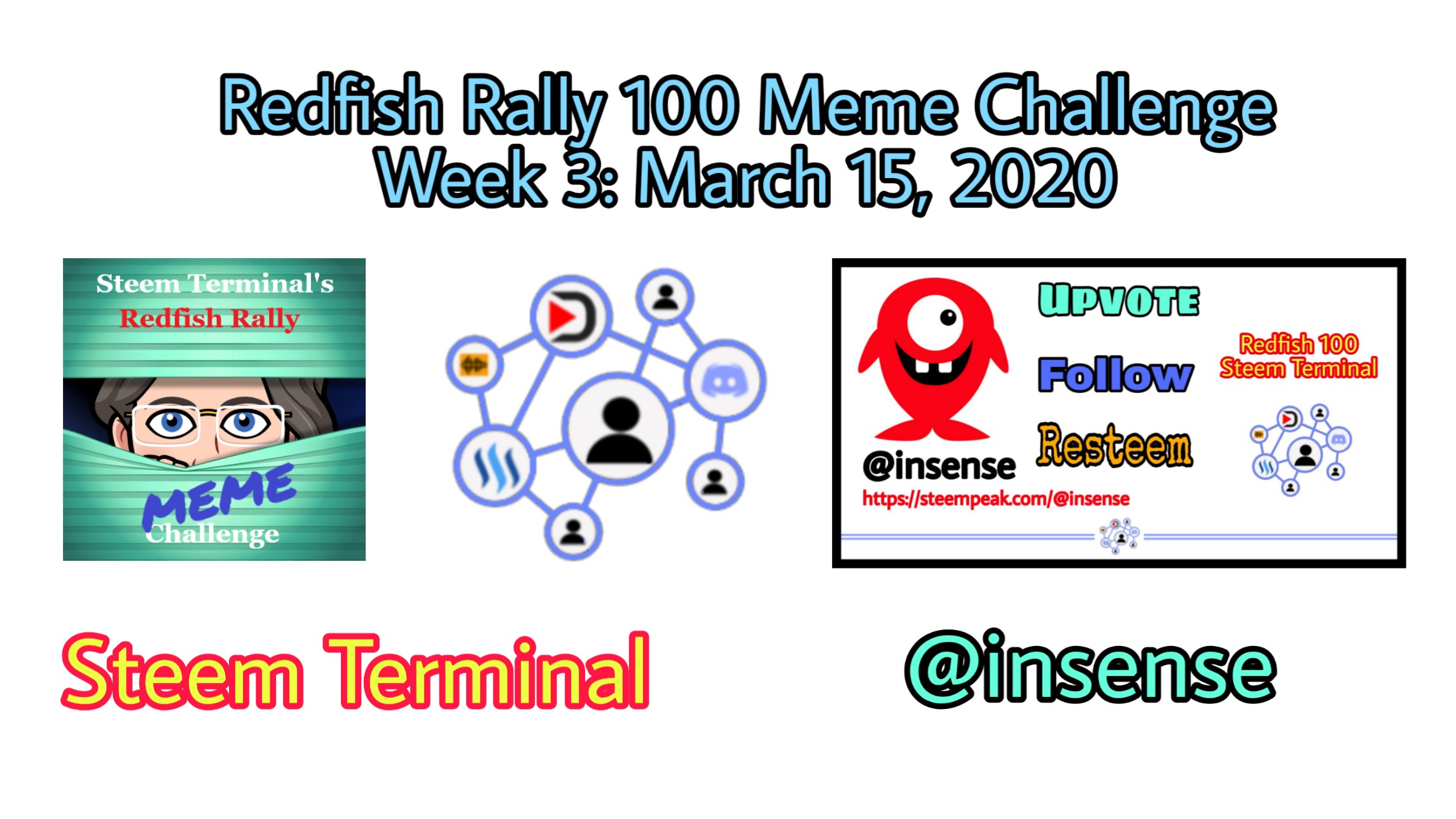 Hello Everyone,
Here I am coming with my another post in Redfish Rally. In this post I am going to submit my entry for the REDFISH RALLY 100 MEME CHALLENGE - Week 3: MARCH 15, 2020

What is a Meme?

A meme is an idea, behavior, or style that spreads by means of imitation from person to person within a culture often with the aim of conveying a particular phenomenon, theme, or meaning represented by the meme. A meme acts as a unit for carrying cultural ideas, symbols, or practices, that can be transmitted from one mind to another through writing, speech, gestures, rituals, or other imitable phenomena with a mimicked theme. Supporters of the concept regard memes as cultural analogues to genes in that they self-replicate, mutate, and respond to selective pressures.
From Wikipedia

There are many kind of meme. Most of them are funny, ridiculous or laughable. Today I am coming with some memes which are made by me. I collected the blank meme pictures from https://imgflip.com and editing with my own speech and comment. I am going to submit total 8 memes in this post. Some of them are about Steem Terminal, and others are about the present situation of Steem Blockchain and Former Witnesses. I also put some description about every meme. Hope you will enjoy them.

A Meme About Steem Terminal

By creating this meme I want to share my outlook about Steem Terminal. Steem Terminal always rising their helping hand for the newbie Steemian who have still some confusion about Steem Blockchain. Sometimes some of new user of steemit was depressed about the complexity of the whole system of Steemit. But Steem Terminal appears with a cheerful mind and told them not to be worried.

A meme about the Cordial Relationship between the Steem Terminal and Me!

When I came to Steemit, I was so excited with no knowledge about Steem Blockchain. When I published my post, I was so disappointed that there is no one who came to support. I was also scared about some rumours and the vague rules of Steemit. Then @wesphilbin sir invited me to join their Biggest community called Steem Terminal. Nowadays I can say They are really blessing for me. Always I learn new new things not only about Steem Blockchain but also about daily life from the member of Steem Terminal.

I don't know the whole lowdown after Steemit connection with Tronlink. But I know some news about present situation. This meme about the New witness battle. Justin put his own witnesses to the top some days ago. But the great Steemians who operate Steemit for a long time and who love Steemit again try to get back the former Witnesses as well.

When Justinsun planned to achieve the whole Steemit and ruled by his ownself and put his own selected witnesses to the top list, the old Steemians just put him down. They don't give him any chance. I think this is the best example for Unity is Strength.

Know Everything from Steem Terminal!

You can know everything about Steem Blockchain from the members of Steem Terminal day by day. They are so familiar to give guidance to the new user of Steemit. May be I am the best example about it. Once a time I don't know anything about Steemit. But nowadays I know many things about Steemit. I also try hard to create my content more creative.

Nowadays Justin is neglected by everyone for his conspiracy. So I made this meme for fun purposes. I think he would have accepted by everyone if he had a good plan.

I think Steempeak is better than Steemit. Because Steempeak has some awesome features which are so helpful for blog writing. Steempeak should be more acceptable for making creative content.

Justin's Empire is in Ruins

This is the final meme of this post. I want to share the present situation of justin after the former Witnesses are coming back to their top position. In my opinion I can say that the Old Steemians are just awesome! Their bonding is so strong to break. I just feel so happy to be a redfish on their Respective Community.

Finally I just want to say that all of the meme are made for fun purposes. Please don't take it seriously or as personal abasement. If there is anything wrong in this post, then let me know. I will delete the wrong thing without any hesitation.

I am a Redfish on Steemit. Nowadays I am more concentrated on my writing. #steemterminal helps me a lot to improve myself as a redfish with their valuable advice and suggestions. Thanks to everyone for supporting me. Hope I will be coming with more creative content on my future posts.

Thanks for stopping by ma'am.

Like WOW ! I feel honoured and so many. This is how a challenge is done. You nailed it, and I think it’s great you are in the rally ! Only one thing for me to do ! 💯 % upvote for you and the work you done

Thank you so much ma'am

Amazing memes about the ongoing stuff on our blockchain @insense funny and smart. Thanks for your thought about us at the SteemTerminal discord server 😁
Best luck for you, keep your adventure going!
Take much care, hugs over there 🤗🤗