HOW MUCH TIME DO PEOPLE SPEND ON EACH SOCIAL MEDIA? 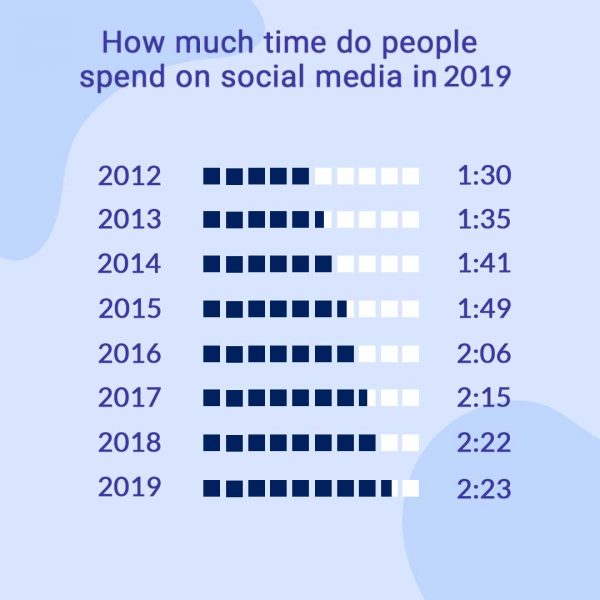 Certainly you have seen many people around you who can’t live without their cell phones and most of the times their heads are down, and their fingers are swiping. They might do different actions while they are using their cell phones, but researches have shown that most of the times, they are spending their time on different social media platforms.

People use social media right after the moment they get up until late at night sleeping with a cell phone next to their pillow or in hand. Like it or not, people are spending more and more time on social media every single day, which causes a completely different statistic every year and social media has become inseparable from everyone’s life these days. Everyone has at least once come with the question of How much time do people spend on social media?

Which social media platforms are most used?

Facebook, as the most popular and used platform, allocates 58 minutes of using for sharing and watching photos and videos. 95.1% of Facebook users access it through their cell phones, and the rate is getting higher every year. Also, researches show that Facebook users check their account several times a day.

Moreover, Facebook lets the android and iOS users check how much time they have spent on the platform by “Your time on Facebook” app since November 2018. Also, you’d better know that 85% of Internet users have a Facebook account.

In June 2018, Instagram reached 1 billion users, and 63% percent of Internet users have signed up on Instagram, but 5% of them are not active. The average spent time on Instagram is 53 minutes for now which is just 5 minutes less than Facebook.

79% of Internet users have a YouTube account, and most people use it for having fun. The spent time on YouTube is increasing and it is 40 minutes on average a day for now, and the watch time has grown a lot too. Also, YouTube provides an app to find out how much time you have spent on it.

As you know, WhatsApp belongs to Facebook, and it has the most active users among other platforms, and 60% of Internet users have a WhatsApp account. Surprisingly WhatsApp was known as the top platform by 128 countries in 2018.

Snapchat is one of the popular platforms, but everyone doesn’t use it and the average spent time on Snapchat is much less than other platforms, which is 35 minutes per day.

The last but not least one is Twitter, which social media users spend 3 minutes a day on it.

You can rarely find a region that doesn’t use social media, but there are some regions that use social media a lot more than other countries. As you can see Asia pacific, Europe, Latin America, Middle East, and North America spend more time on social media.

And here is the list of top 5 countries that use social media:

Have you ever wondered why people spend a lot of time on social media platforms and what would be their reasons?If you ask the social media addicts or people around you, you may hear interesting and different answers such as:

What is your reason for spending time on social media?

Social media plays an important role in our daily life, and it can affect our daily routine, our likes, and dislikes, our interests, what we buy, places to travel and visit, etc. The number of social media users are increasing every day, which is good news for a group of people who earn money on social media.