Making food based on pumpkin. Publication # 2: The step by step in the preparation of the creamy pumpking cake 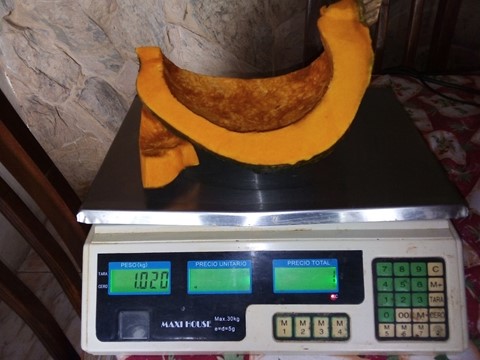 Hi Steemians !!, again connecting with you for this blog. Greetings and affectionate hug to all.

For the preparation of this delicious cake we will use approximately 1 kg of rich calabaza. In our case, the product was grown in the Orinoco Delta, a region located in the eastern part of Venezuela

We made this creamy cake on Sunday. Finally my sister-in-law decided to prepare this dessert for my nephews, I guess it is because this day can go more calmly because she does not have the usual pressure to attend work.

That Sunday, the day was beautiful and very hot in this rural community in eastern Venezuela. So before listing the ingredients to use, my sister-in-law decided to leave the house to look for fresh milk in one of the farms near the family's residence. 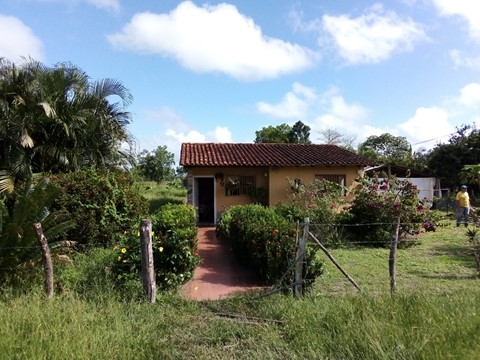 A beautiful Sunday morning in the rural community of Las Alhuacas, in the eastern plains of Monagas State

Soon my sister-in-law returned home with fresh milk, one of the main ingredients for the preparation of this cake. In this case she bought 2 liters of milk and its sale price / liter was 3,500 bolivars, this represents approximately $ 0.30 / liter. 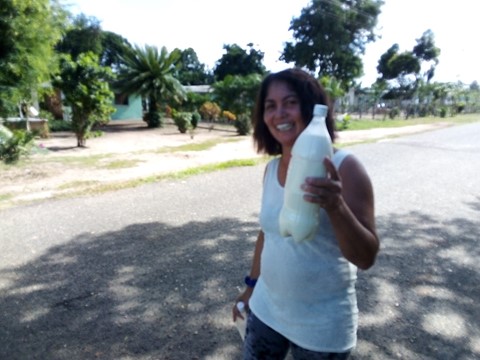 My sister-in-law with the two liters of fresh milk purchased. It is common for people to use recycled plastic containers for this type of activity

Now we indicate the list of ingredients used to make the creamy pumpkin cake: 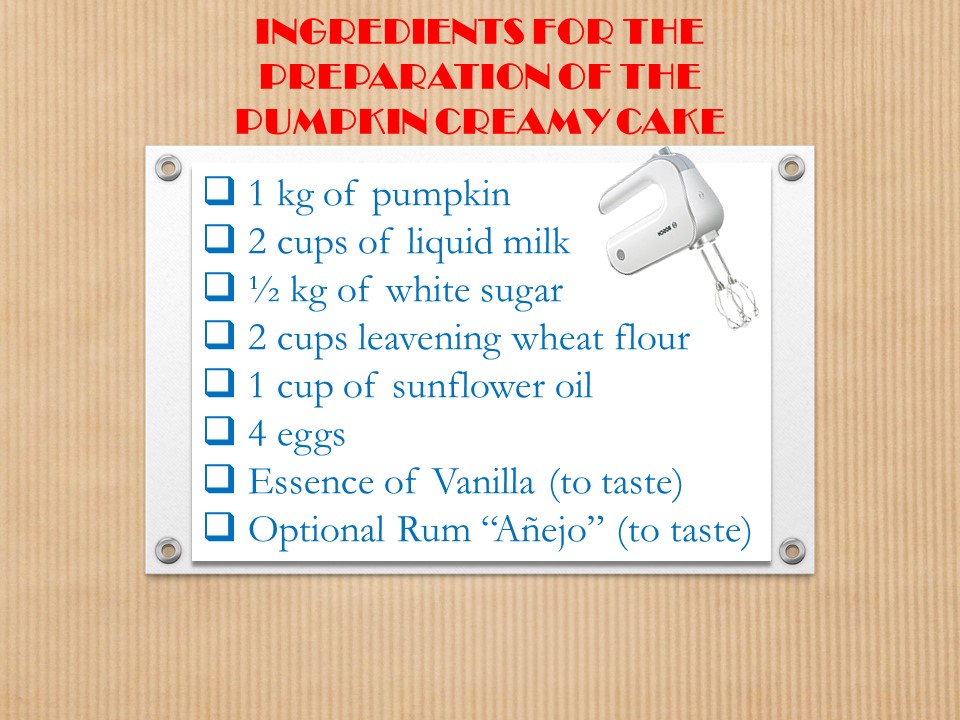 The Extra Añejo Rum, in a small amount, gives a special touch to the cake to prepare

By my request, my sister-in-law proceeded to place all the ingredients to be used for the preparation of this cake on the table. In this case we excepted from the image two of the main products such as pumpkin and milk. With fresh milk we have to perform a procedure that we will detail later. 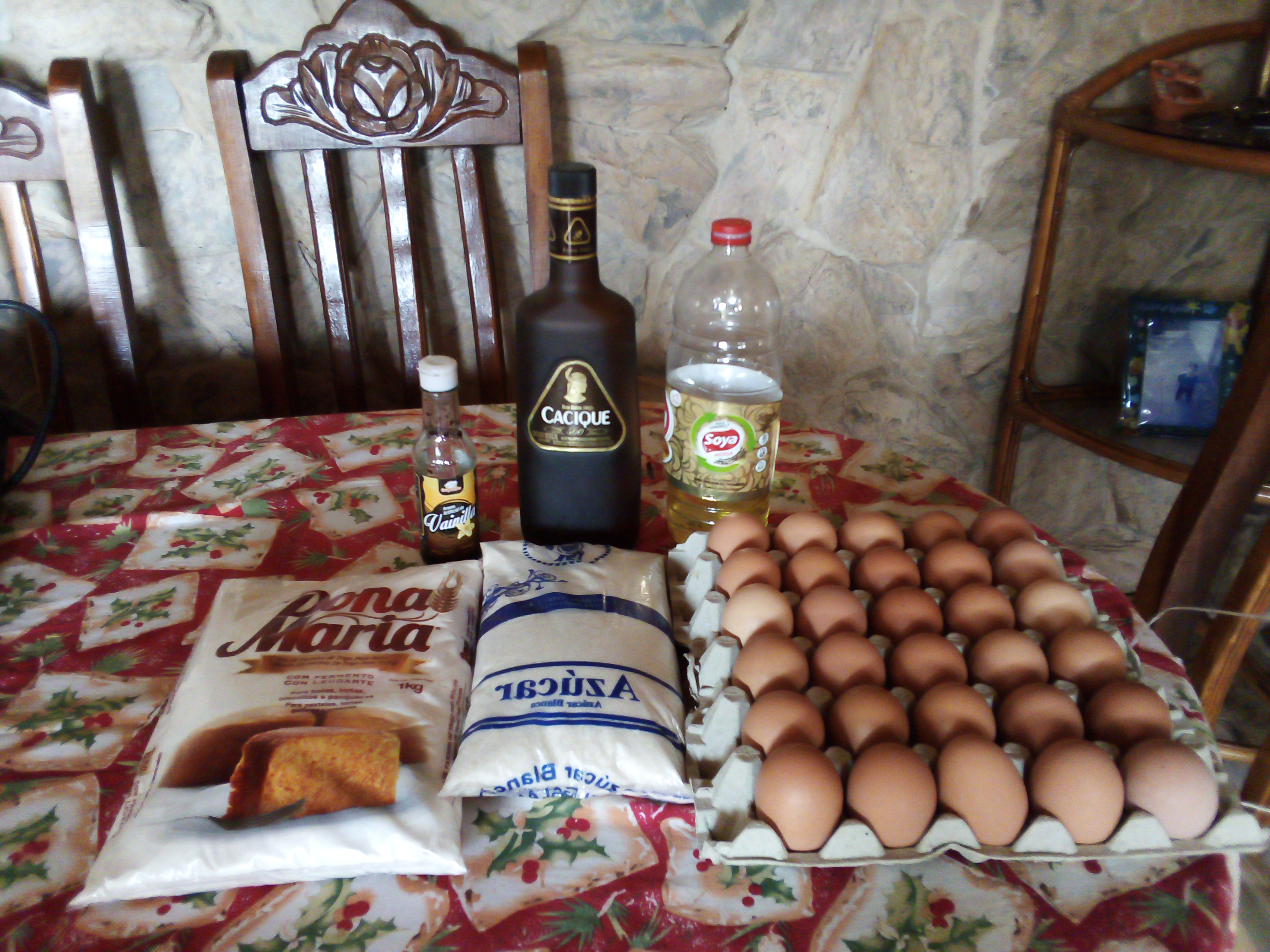 A view of the ingredients to be used to make the creamy pumpkin pie. It is a shame that most venezuelan families currently can not enjoy a dessert as nutritional as this one.

Fresh milk after milking the cow is not advisable for the direct consumption of the human being, this is due to its high load of bacteria and fat content. Under the aforementioned, milk should be boiled until it reaches its boiling point. Afterwards, let it rest for a few minutes and remove a layer of fat or cream that remains on its surface. 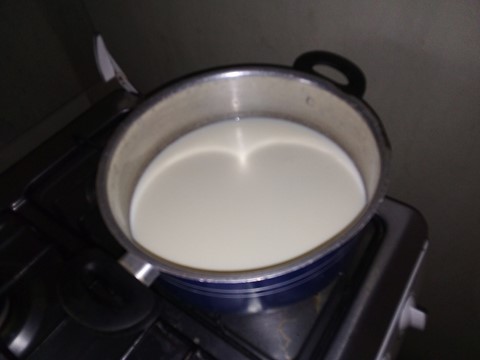 The 2 liters of milk in the process of heating 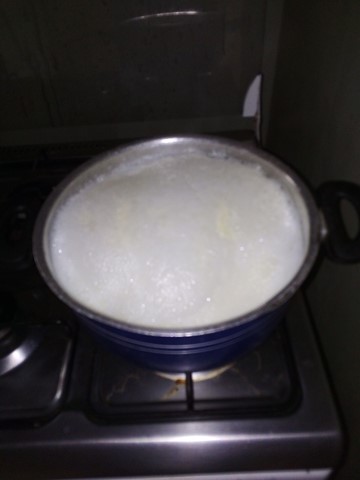 The milk reaches its boiling temperature at 100.17 ° C

As an anecdote I tell you that after the milk reached a lower temperature, my sister-in-law put a small amount to my nephews' new pet. 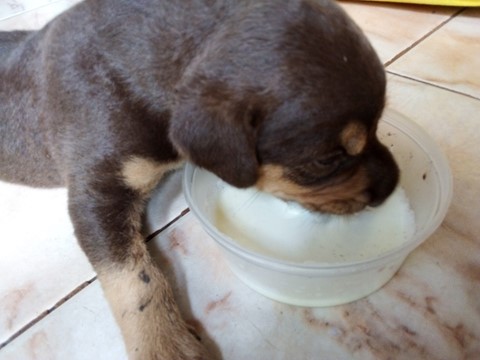 A beauty enjoying fresh cow's milk. The dog has her first teeth and mom doesn't want to breastfeed anymore

On the other hand, the pumpkin to be used in the cake is cut into small pieces (without its shell) and put on medium heat for cooking. This process can take about 20 minutes.. 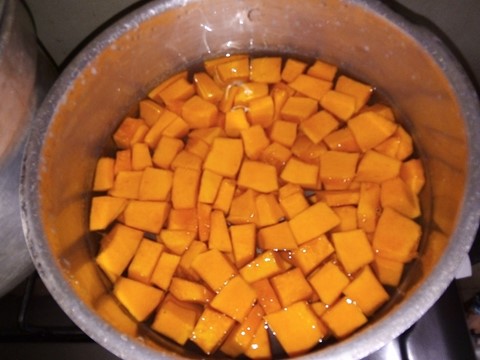 The pumpkin cut into small pieces during its cooking process, observe its intense and beautiful orange color

After cooking the pumpkin, using mineral water, the pumpkin pieces are liquefied until a homogeneous cream is obtained. 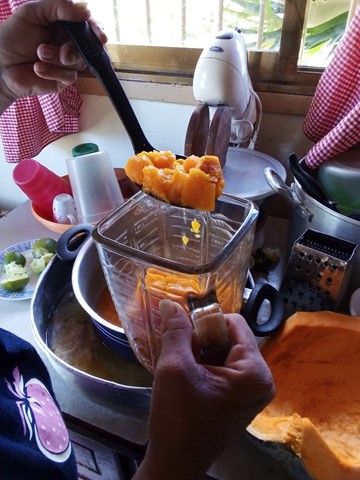 The cooked pumpkin before being liquefied 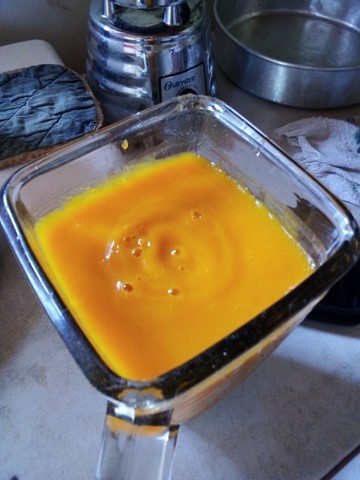 Pumpkin cream ready to be added to the cake's ingredient mix

The next step in the manufacturing process is the mixing of ingredients and the shaking of them, for them we use a large red plastic bowl. The first of the added ingredients were eggs. The amount used was 4 units, using both the yolk and its white. 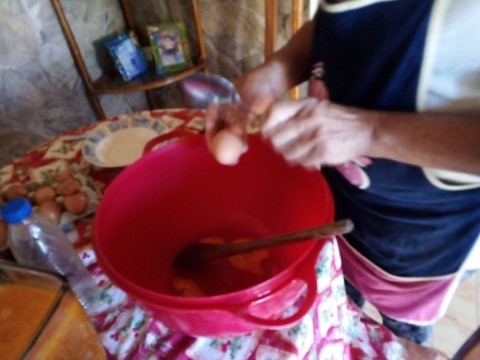 Both parts of the egg, the white and the yolk, are used for the preparation of this delicious pumpkin pie

The second added ingredient is sugar, we use approximately ½ kg of refined white sugar in this preparation. 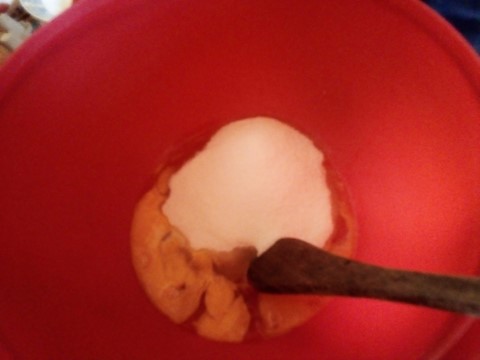 In some preparations the sugar can be substituted by cane molasses, honey or “papelón”

The parade of ingredients to be used continues with the addition of the oil. In this case we use sunflower oil being the amount used equivalent to one cup. 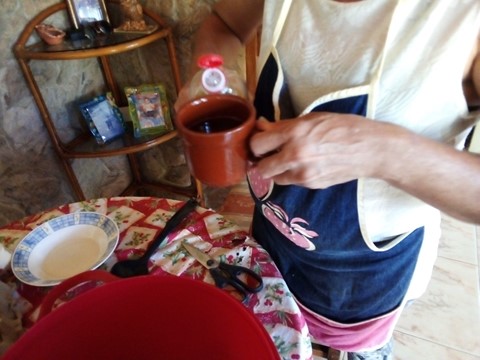 The oil helps to give the cake a creamy texture. This can be replaced by unsalted margarine or butter if preferred

All these materials were mixed with a wooden pallet and later an electric mixer was used until a creamy, homogeneous consistency without sugar lumps was achieved. 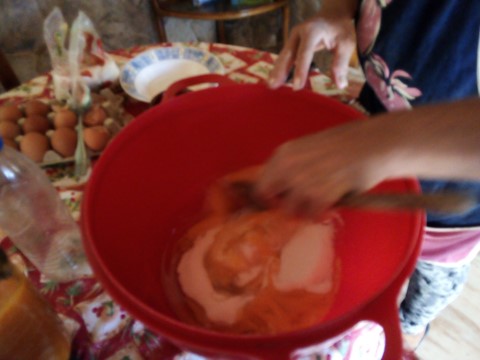 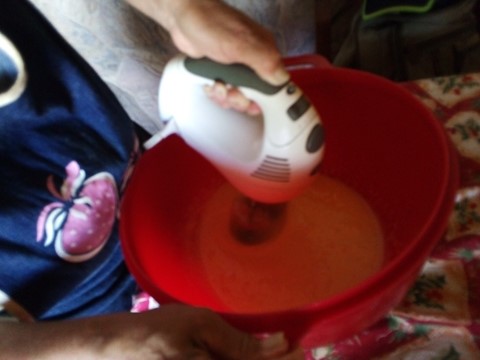 And then we use the electric mixer for a few minutes

The next material that was added was pumpkin cream, ingredient that is the basis of this preparation. With a wooden pallet it mixes evenly with the materials previously contained in the bowl. 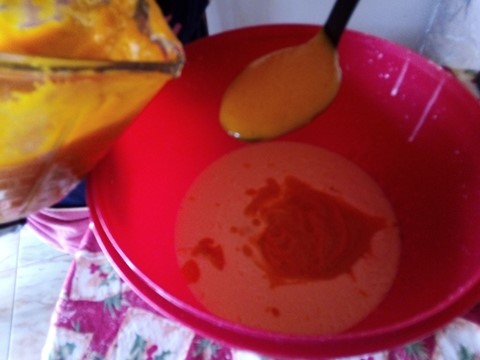 Removing the pumpkin cream from the blender

Next, a small amount of vanilla essence is added. The amount is about two teaspoons. 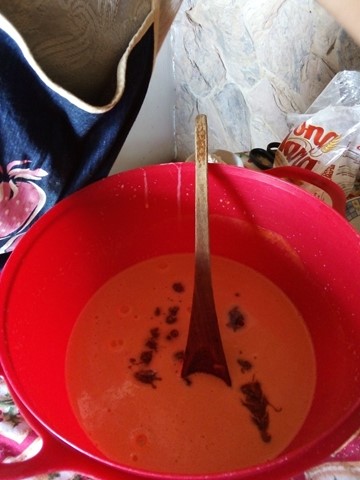 The characteristic dark brown color of the vanilla essence is observed. We also enjoy its peculiar smell

Then my sister-in-law took her ace up her sleeve (hahahahaha) and proceeded to add some "squirt" of Extra Añejo Rum. In this case he used a rum of the Cacique brand which is prepared from the mixture of 7 rums with an aging period between two and six years. The smell of the product was spectacular; however, we agreed not to add a larger amount since the cake was going to be eaten by my nephews. 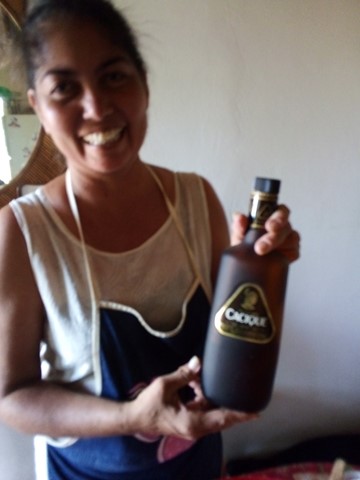 The ace under the sleeve of this recipe, a small touch of liquor with Extra Añejo Rum. Rum is one of the traditional products of Venezuela, famous worldwide

For each liquid ingredient that is added, the wooden palette is used to mix them. The next ingredient that was incorporated was liquid milk after being boiled. Two cups of this ingredient were added. 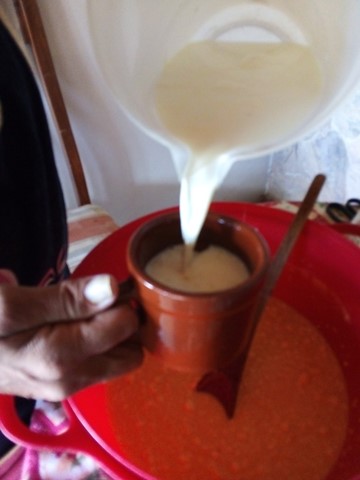 The addition of materials concluded with the incorporation of two cups of leavening wheat flour. My sister-in-law was very excited about a flour called Doña María, she said that this product originally from Brazil has excellent quality. 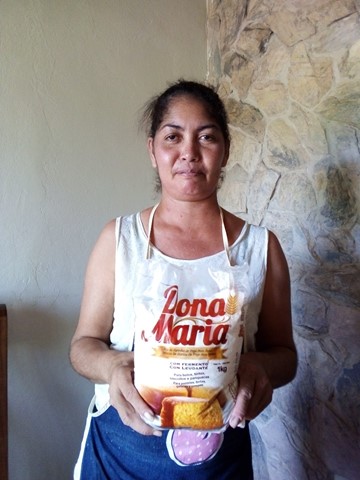 My sister-in-law doing free publicity to the mentioned brand 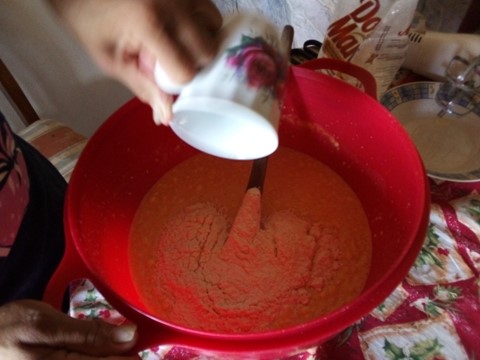 Something that I did not understand was why my sister-in-law did not end up mixing all the materials with the electric mixer. She preferred to do it with the wooden palette, I suppose they are customs of each cook. 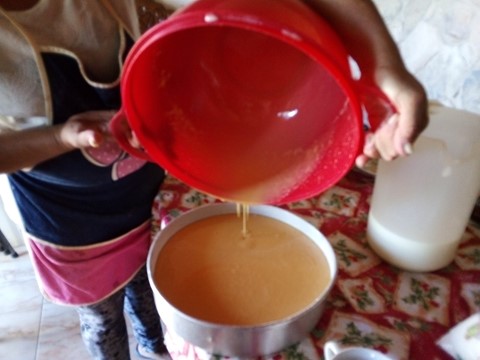 The ingredient mix ready to be baked

The mixture ready for cooking is introduced into the oven using an aluminum nozzle in this case. As the oven used was gas, the cooking temperature was 180 ° C and the estimated time of about 30 minutes. 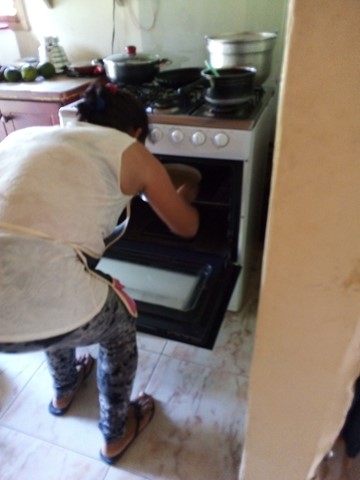 Introducing the "tortera" in the oven

Periodically my sister-in-law was monitoring the evolution of cake baking. A few minutes later it was observed how the mixture was taking shape. 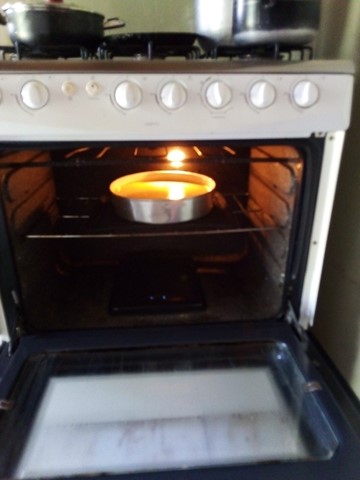 TASTING OF THE PUMPKIN CAKE OF CALABAZA:

After a few minutes of being removed from the oven, we tasted a portion of this delicious creamy pumpkin cake. In my case, I enjoy this cake much more when it's in the fridge since its texture is very creamy. 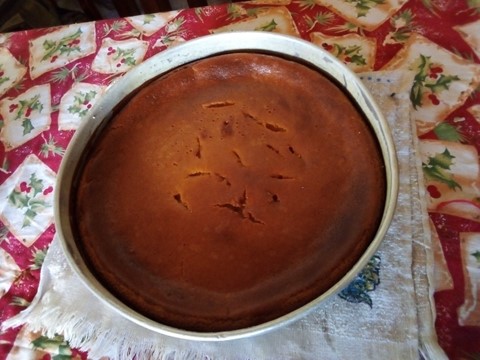 My sister-in-law several times introduced the knife to verify the cooking of the cake. The cake turns after cooling and these "wounds" are not visible hehehehe

The creamy cake already served and ready to be enjoyed. 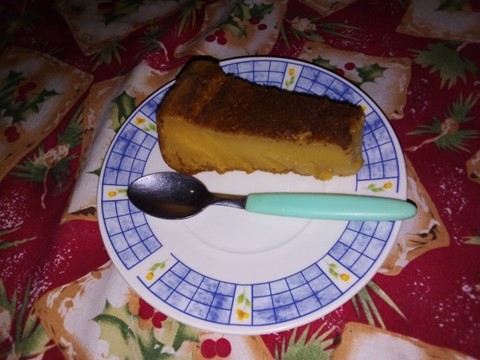 The creamy cake served for the enjoyment of the family 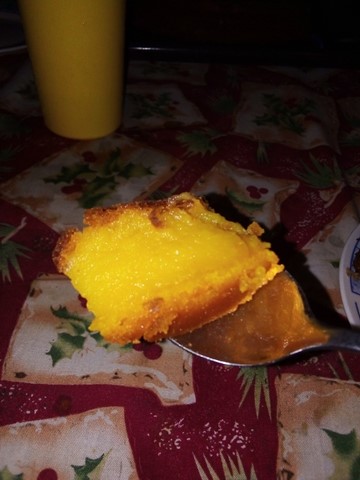 The creamy pumpkin cake was left with a color, texture and wonder flavor 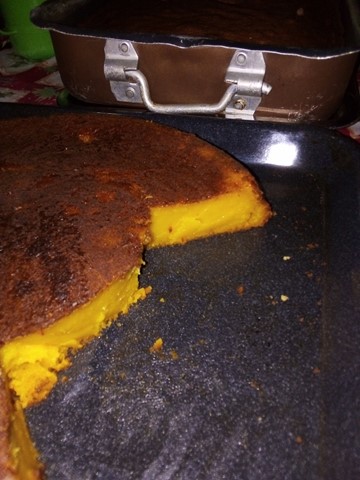 Surprisingly for their parents, the nephews quickly enjoyed good portions of this cake

I hope friends who enjoyed this post. Later we will show you other delicious preparations made with pumpkin. A happy day for everyone!