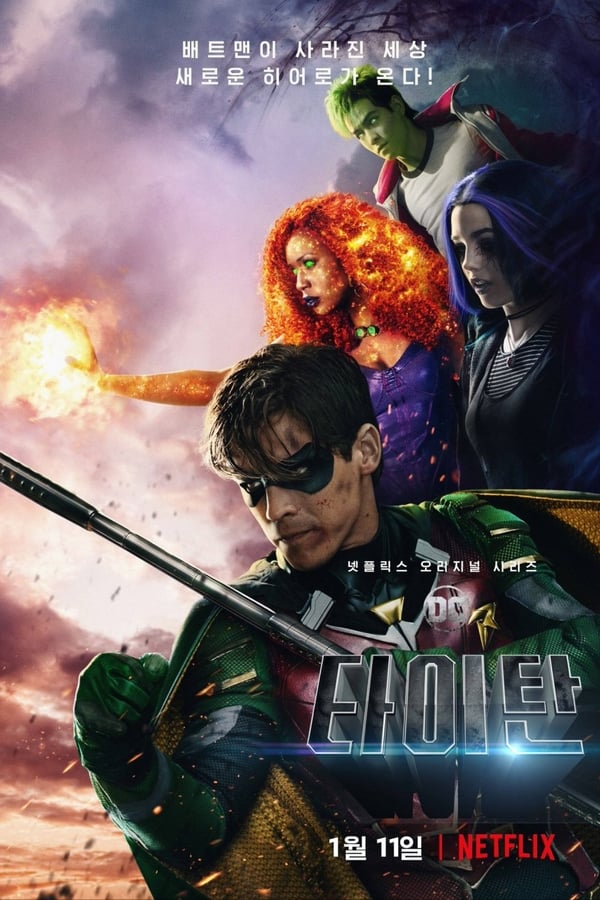 #
It's no secret that DC Comics and Warner haven't honored the characters they own, and in fact, most of the movies and series they've developed don't quite convince.

In fact personally when it was confirmed the development of a series focused on the famous Teen Titans all were doubts for me, especially because the first glimpses of the cast and the design that some of the characters would have were not the best, however when it was finally released, all this remained as a simple anecdote where the creators showed us that despite the doubts of many this is a show created with great affection for the characters and desire to modernize a story with a more mature touch.

Titans is a series made without fear and with a lot of courage that shows us rough and more realistic aspects of young superheroes that are finding each other and that more than fighting a common enemy, manage to create a family bond that gives sense to many of the intense moments of the story.
#

#
The story, in general, is not a masterpiece, but it is very good because with each episode we see how everything merges and forms a great arch plot that eventually gives us incredible moments. A plot where neither the good ones are so good nor the bad ones so... well, yes, they are definitely bad.

The whole story is surrounded by a religious context that gives an apocalyptically biblical tone that makes the story intense and different from other series or superhero movies, especially because the plot is developed with some characters fervently believing that a girl (Raven) is the incarnation of evil and should be sacrificed and for others the door to a tomorrow that erases from the map all the sins of humanity. This conception means that there are basically no villains in the first season, and this is possibly the defect that does not make it reach perfection. Everything remains as a letter of introduction to a bigger story.

The rhythm of the series is brutal. With action scenes and small turns in the plot that keeps us stuck to the TV and wanting to see more, especially because throughout the course of the series we get to know more about the characters and more about why they are involved in this whole apocalyptic mess.

I think the creators of the series have been able to capture the wonderful way a vigilante fights, with perfectly creative shots that remind us a lot of some of the fight scenes of The Dark Knight that in combination with great sound effects give more intensity and seriousness to the fights. You can see the work behind the technical section and it's nice to see that, visually, the series is an absolute pleasure. To sum up this paragraph: the action is brutal, it is very well filmed and adds a lot of points to the result.
#

#
Something that may not be so well controlled, is the succession of chapters, that is to say the series has at times a plot that advances in a direction to certain chapters, but then unexpectedly makes us wonder if we have skipped a chapter because it drastically changes the way everything was developing. For example, at the beginning of the last chapter we find a reality where everything we had seen previously in the series seems to have disappeared without explanation, and we jump into a super intense combat between the master (Batman) and the pupil (Robin) that although it is extremely brilliant seems to make no sense.

Fortunately little by little and as everything in the series we realize that even that battle between Batman and Robin has a reason to be there. A story at times simple, and at times complicated that develops organically and that we will quickly understand and love.
#

#
This is the highest point of the series, the best for me without a doubt.

Characters created in a different way, where all have their imperfections, their doubts and fears, and all have an arc of development throughout the series. Even secondary characters, like Dove or Hank, have something to say. Episode 9 for example is the living proof of how much the series cares about giving layers of depth to its characters. It wants to go deeper, go further, narrate. In fact, there is a narrative improvement that shows itself as the episodes advance, most of the lazy script errors disappear.
#

#
If I have to praise a character, his name starts with R. What the creators do with Robin, Dick Grayson, is one of the best things I've seen on television. It's the best interpretation/performance I've ever seen of this character. In the series we find a ruthless Robin, frustrated, angry and even a little crazy. Society sees him as a danger, and the word "sociopath" is even used on numerous occasions. The relationship he has with Batman/Bruce Wayne tormenting him, making him not know who he really is or what he wants. Robin is a decaying vigilante who, while trying to improve, doesn't have to. The series does as it pleases with him, without fear of trying, of venturing to explore and develop the character.
#

#
The other characters also stand out in certain moments but do not reach the height of Robin and his journey to discover himself far from the mantle of Batman.

Raven, Starfire and Beastboy develop a little slower but finally give us a clear glimpse of their concerns, fears and desires. In Raven we see a girl frightened by the evils within her that sometimes are triggered by emotions that she can not control. While Starfire and Beast Boy just want to know who they are. The first one basically doesn't remember anything about her past, something that makes her have small identity crises that she crushes by helping the rest of the Titans, and Beast Boy a guy who has been in a house almost all his life and now wants to live life differently with real friends.
#

#
In general it is a series about young superheroes, made in a very adult way, where the action scenes are made at a cinematographic level without half measures or fears. A series taken slowly but that manages to become one of the best series of superheroes that I have seen, for its intense and dramatic moments so well elaborated and that make each character stand out perfectly.

The series is not perfect and has some flaws, especially in the effects and CGI but can go unnoticed by how well constructed the characters are.
#

Your content has been curated from TripleA the Movie and TV Show community on the Steem Blockchain.
Have a look at our latest Curation project.

A separate request would be to keep the review in a single language, as it is not helping either the international community nor the Korean community to have a mixed language review.

Thanks again for your efforts.

Please have a look at our guidelines or a view at other Movie Reviews at www.triplea.reviews.

Sorry I will do that from now on.