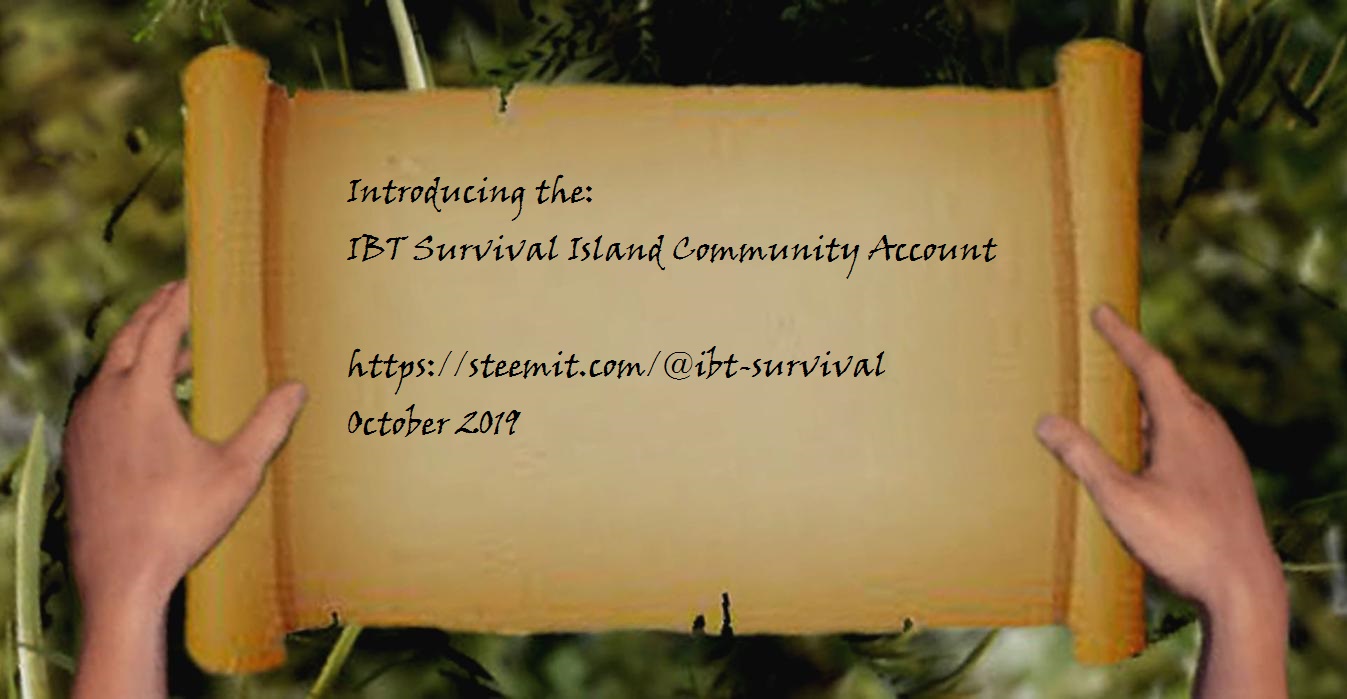 This is a newly created community account for the PC game: IBT Survival Island.

...Also known as Interactive Battle Tournament (IBT) Survival Island, the game is a pioneer first person extreme realism survival game being released for the PC platform with a proposed debut in 2020.

IBT had humble beginnings starting out as a product of  a prototype 'first of it's kind' bot driven blockchain game exclusively built and run on the Steemit Platform. Utilising the  Proof-of-Brain capabilities of Steem with extensive help from the Steemit community the bot driven game was born. While many Steemians helped, old Abandonware PC games images featuring throughout.

Above is an example image - originally created by for an Abandonware game - such images were used with legal action unlikely due to careful selection of non copy right materials and companies unlikely to take legal action having being disbanded.

IBT made it's first appearance in early 2018 as seen in this post:https://goldvoice.club/steem/@lordnigel/interactive-battle-game-experimental-tournament-paid-in-steem and while others had attempted simple single page post RPG style games, nothing comparable to IBT existed; To be honest I think it might be one for the history books - it could take claim to the title of 'Grandfather of Proof-of-Brain based RPG games'. Despite extensive searching, evidence has yet to be presented of anything anywhere else like it previously recorded on any blockchain anywhere before, in short it was the first!.

IBT was developed as a JavaScript bot driven game designed to engaged the Steemit community players by allowing them to interact and compete by simply doing battle via simple replies to a post. The general premise was a number of posts were placed over a number of days, including a MAP and players made their way across the map by being rewarded a score from the various battles.

The above image was the original map created by Steemians showing the game progress on Steemit. You will note it's based on traveling between islands and competing (Inspiration for IBT Survival Island).

In IBT players faced challenges to finally face off against a final boss and claim prizes (including liquid Steem Cryptocurrency). There were 9 iterations of IBT with the final being concluding with the destruction of the boss shown in this post:https://goldvoice.club/steem/@lordnigel/interactive-battle-tournament-9-boss-round-fight

The above image was the final boss in IBT iteration 9

From here IBT development undertook a path correction with the release of a new style of playing allowing players to fight off against each other in a constant battle and progress  rewarded with a level up and a raise to the top shown here: https://goldvoice.club/steem/@lordnigel/welcome-to-the-ibt-development-zone-player-vs-player-adv-test-game-on-steemit

The above image is from the steemit platform game: Interactive Battle Tournament PvP: The Great War of Dadotoci

With the evolution of Crypto games and the release of big hitting off platform Steemit games such as @steemmonsters and @drugwars the spark of IBT died out as interest in off platform Steem games exploded onto the scene. Unfortunately IBT was not significant enough to attain cult  status and today has largely been forgotten but all but a handful of original Steemian supporters :(

While IBT was a product of many Steemians the game was created and primarily run as a competition by @lordnigel and many other interested Steemians (too many to list).

Under the title IBT @lordnigel who learned programming to help run IBT moved to an off platform development of the game based on feedback of the remaining Steemit IBT community of the time. The initial ideas can be found in this post: https://goldvoice.club/steem/@lordnigel/steem-raising-post-one-smt-survival-game-0-or-100-steem-raised

A fundition project was kicked off in early 2019 https://goldvoice.club/steem/@lordnigel/ibt-survival-island-game-progress-report-one

The above image demonstrates some simple game play and imagery. Captured from the actual current PC game under development IBT Survival Island.

Disappointingly but not completely unexpected interest in development has been minimal; it has taken over 8 months to reach an ever declining crowd funding target - interest in supporting a low skilled startup creating a non for profit style game seems to be minimal in a time where the entire crypto market faces mixed interest.

This takes us up to date and while I could go on for ever it must be time to wind up this introduction post :) - I will leave the reader with a fey features of the coming IBT Survival Island to finish up.

Varied Arrival on Startup: To ensure a level of dynamics, each time a player begins a new game the way they arrive to the island will differ, emerging players in an elaborate story on how they find themselves trapped and having to survive on an island alone. As development progresses it's envisioned the game to become multiplayer with players able to to travel between islands and share what they have learned.

A new immersive experience: rediscover small parts of the original IBT adventure with 100% originally built characters, items (Some built on those making an appearance in original IBT) and realistic environmental sounds and FX

Social features: Integrated with Steam and Steem SMT's a number of unlock achievements will be possible. SMT Token rewards and a fun new SMT token system will be used based on a first of it's kind 'Proof-of-learnt' SMT rewards concept, to deliver a truly educational game to endure.

Extra features: Story line development and in game features created and delivered as product updates based on what the Steem community wants.

With the successful closure of the fundition project IBT Survival Island regular updates will continue to be posted under this community account to provide information and seek feedback and assistance from the Steem community as the game progresses to full release expected some time in early 2020.

I hope the Steem Community can get behind our new IBT Survival Island PC Game. I thank you for reading my Introduction post and look forward to take any comments or questions in the normal Steemit way.

Welcome ibt-survival!
eSteem is the application that improves your experience on Steem. You have full control over your data and content, unlike some apps we don't use our users to promote our application or services.

We have Mobile application for Android and iOS users. We also have developed Surfer Desktop application that helps you to gain new followers and stay connected with your friends, unique features - notifications, bookmarks, favorites, drafts, and more.
We reward our users with encouragement upvotes as well as monthly giveaways rewarding Spotlight top users and active Discord users.
Learn more: https://esteem.app
Join our discord: https://discord.gg/8eHupPq

Steemit is not steem! RAWR! ;D

Chronicling IBT like this was pretty cool, it's coming a long way since being one of the original (if not the original?) games on the platform :)

Hehe - Steemit is a kind of platform that runs on Steem in my view... IBT really ran on Steemit! which in turn ran on Steem; as replies etc and bot activities posting is stored on the Steem blockchain, IBT ran on both :). Hopefully this clears up why the post jumps between calling it Steem and Steemit hehe

Thanks - it has come along way...you pointed out many moons ago how IBT went quickly from a single fight post contest to a suddenly a full tournament style. Thanks for being part of it :)

Well I'm over here on SteemPeak so there ;D

And there's quite a few now!

Oh cool, would it be okay if I got the boys to beta test? (or at least the one that would be half-decent at this type of game)

Welcome to Steem ibt-survival! Partiko is officially the fastest and most popular mobile app for Steem. Unlike other Steem apps, we take 0% cut of your earnings! You can also be rewarded with Partiko Points while using Partiko and exchange Partiko Points for upvotes!

@ibt-survival Hey Welcome here dear... Glad to see you here....
Upvoted you 100% !!!
Hope just like your #introduceyourself post your every post gets on top and you achieve your goal using steemit...
Do view my profile and follow me to get one of the amazing valuable blogs on steemit!!!! Thanks=)@ibt-survival

Looks awesome.
Sorry I missed out on some of it.
IBT was great.
I am back. Let me know what type of support you need.

Sweet!; just follow this space for now, and resteem any posts of note would be fantastic.

I'm just doing some setup/house keeping before jumping in too deep, i.e.

Preparing this new account.
Preparing a new discord channel.. - will investigate in next week or so. Actually would be good if you could jump in on that just for some txt chats/testing, will msg you when it's up to test :)
etc.
..basically just keep an eye on posts from this account for a bit
Cheers.

Perfect.
Will jump into the discord