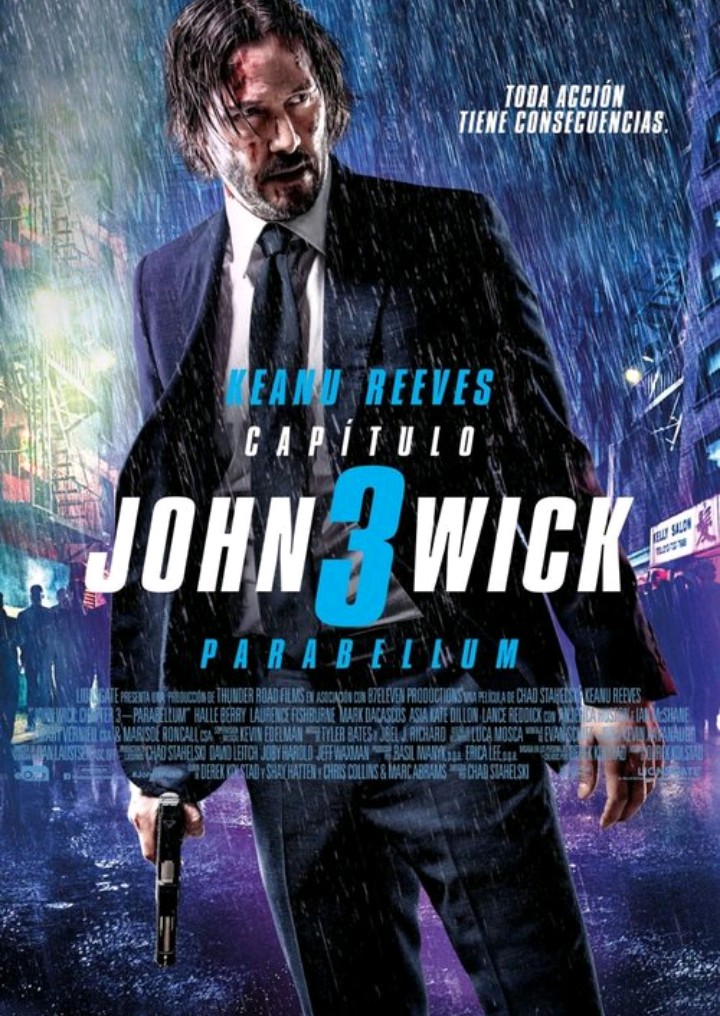 John wick is a 2019 American action movie, the movie stars Keanu Reeves. This movie happens to be the third installment of the john wick movie series. The movie is directed by Chad Stahelski and was written by Derek Kolstad, Chris Collins, shay hatten, and Marc Abrams, the movie was also based on a true story by Kolstad. The movie also stars Halle berry, Laurence Fishburne, Lance Reddick, and Ian McShane.

The movie takes place one hour after the events of the former movie, john wick 2. The movie is about an ex convict John Wick finds himself on the run from a group of assassins after a 14 million dollars contract was placed on his head due to his former actions.
John wick was chased due to the unsanctioned killing of a crime lord. A bounty of 14 million dollars was placed on his head which increases every hour of him still being alive. Through out the movie john wick was able to maneuver himself and always found a way to live because practically every body was looking for him so as to kill him and get the money. He then ends up finding him self back at the beginning of all of what he all left behind in the first chapter of this movie.

This movie offers all kinds of action, the movie had its own unique style of action, any kind of action you can think of is in this movie, there's so much more to the movie you should try and see it.

Keanu reeves plays the role of Joh wick, what can I say? John wick is an amazing actor and his stunt double was just amazing, I love the fact that wick was just able to keep his thing through out the movie, he has this unique way of walking, it's as if he's got something wrong with his legs. Amazing killer, Amazing fighter, Amazing Shooter, all round amazing Actor.

Laurence Fishburn, The king, My main man, I just love the fact he's in the movie, him and Keanu have got this really good tag team together when they in the same movie, although he didn't get to play alongside Keanu very often in the movie like they did in matrix but I still absolutely loved the connection between them in the movie and I feel they will get to play alongside very often if there's a chapter 4. Laurence relies on birds as a means of communication he'll say you can trace it, you can't hack it, always reliable which he's right in a sense. He owns and controls his group under the high table and is a friend of wick but he was soon in trouble due to the fact that he helped John wick by providing him with the gun he used to kill a member of the high table which he paid for it with seven cuts to the body, but I sense he's gonna fight the whole table now which I am pretty much hyped about.

Halle Berry is one of the numerous new character which were added to the movie. She was a long time friend of john wick and he one time helped her save her child meaning she owed him, so she had to help wick by taking him to her former boss whom just happen to be a crazy dude, she wasn't also used that very much after her part was done that was pretty much it, she didn't get to appear again.

Ian McShane played the role of Winston the manager of the continental hotel in New York which also served as company grounds in which no body working under the high table can kill anyone inside it, But wick did back in chapter 2 which is why a 14 million dollars bounty was placed on his head, I loved how Winston played his role and went against the high table, so cool in his private heavily weaponized bullet proof room. He was willing to live and die for his role which he did really really well.
There were a lot of new faces on the movie and I think thy did really really well.

You need to watch the first two chapters before you can really fully get the movie, but if you don't it wouldn't matter you'd just have to sit back and enjoy the fireworks. John Wick 3 is action action action but you'll need to really understand the movie from a point if you haven't watched the previous chapters, movie is blessed with amazing designs incredible character building, the action scenes were very well choreographed and played well.

John wick chapter 3 feels like a celebration of all action genres, the movie shows no franchise fatigue, and displays numerous action scenes in the process, I feel like the chapter 3 took the movie to a whole new level, witch books, dogs, horses, swords, you name it. The choreography was just amazing and the energy of the cinematography from dan Laustsen brings the action to life.
Nothing shows john wick as much as Keanu does, a man who has been in his share of classics from the action genre. He delivers a great acting performance and he does one hell of a physical performance in the movie, months of training wasn't wasteful.
If you're a big fan of action movies you need to watch this movie because believe me you've not seen this kind of action.

John Wick is indeed an action movie that is worth watching, although at some times it seems difficult to enjoy it.

I actually have this movie on my PC but I still haven't watched it. When my dad described the movie, he said that through out the movie, John Wick was in action. I've heard a lot of stories about the movie and I'll watch it whenever I have such time.

That being said, I appreciate the effort you took to write this review. I must admit that I enjoyed reading through it. Keep up the good work!!

Please ask us questions on Discord