#Club75 ||Technology - These are examples of the application of blockchain technology 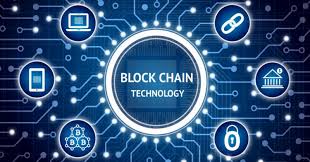 blockchain is a technology that adheres to the concept of decentralization and cryptography in which each data is distributed to any activity, to each network that is joined in one or in the next chain.

Well today I will try to discuss examples of implementation on blockchain.

there are so many applications of blockchain technology that have been, or are still in the exploration stage in various industries, indeed the rest of the Story of the central block is Bitcoin, which we have always implemented is Bitcoin.

when in fact itself technologically it can be used in various industries, for example in Indonesia there is a company engaged in the food industry they have successfully implemented and implemented it in the process, they are monitoring or recording every process starting from breeders to selection from the livestock itself to the packaging process that is ready to be sold to consumers, the technology network that they use they can find out every packaged item, it is sourced from the farmer who can even know from the location.

or it could never exist, they can find out where it came from so that when there is a problem, they can trace completely and transparently the source of what the goods in the consumer are from which breeders or livestock.

The next example is in the music industry.

one of the digital music services in the world they have successfully implemented technology, they implement it in the copyright process they are able to trace from the songwriter, where the song has been distributed, where has it been purchased, so the goal is to share royalties and fees related to copyright it can be transparent and fair.

an example is one of the big companies in Indonesia they have developed a project using the blockchain to regulate processes or process flows related to land, starting from.

it can also be used to change certificates from HGB to SHM funds for building into property rights certificates or can be used to change names for land ownership, this usually happens in buying and selling land, which so far the management is quite complicated, especially for us in Indonesia. already decentralized, each party already has the same data so that the process is much faster.

then it is used in terms of what we use, namely the banking industry.

one of the international banks that is also in Indonesia they claim they have used blockchain technology in cross-border transfers, or what we call a folder axis.

So, did they remove the party, usually when we transfer cross-country, there is a trigger and there is a good deal, usually it's no longer needed because it's a virtual reality like that. Well, in the future they will also develop other related friends that are in line with their business.

there are quite a lot that can be applied anywhere in various industries, we have given examples related to the music industry, food industry, land affairs, and explain about financial transactions. Besides that, there are actually many other examples related to blockchain that have been successfully implemented in the field of finance.

apart from that it's also never technology. Usually we call it or around the set of lots that we can implement this blockchain technology.

So, those are some examples of blockchain technology that I know of, in conclusion, with this blockchain it will be easier for us to do something related to blockchain, and so thank you for stopping by and reading my post on this occasion, thank you.