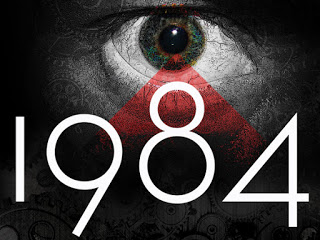 Are We Living in Orwellian Times?

Many people today are comparing our time with the one described in George Orwell’s Nineteen Eighty-Four. Like Orwell’s Big Brother state, “Big Tech” companies are actively trying to destroy free speech that is critical of mainstream media and government official approved “news.” For instance, Google has attempted to erase history,1 is carefully removing legitimate sources of information from its search results because they differ ideologically,2 falsely labeling those sources as “fake news”3 or falsely identifying their content as “dangerous and misleading.”4 Not only this, but “Big Tech”/”Big Brother” has been increasingly overstepping their boundaries with respect to the personal data of their users. We are all being spied on,5 and many of us are changing our behavior to avoid being banned/shunned/judged by others and “Big Tech”/”Big Brother.”6

Given all of this, the comparison seems fitting. Yet it isn’t complete.

Nineteen Eighty-Four is concerned with more than the metastasization of the government into an intrusive surveillance state powered by advanced technology. It’s concerned with human psychology. This is not only evident in its assessment of how totalitarian governments manipulate their citizens’ thinking via the deletion of history, redirecting the anger of its citizens toward imaginary enemies rather than the state, encouraging “group think,” and punishing individual, critical thinking. Nineteen Eighty-Four more subtly deals with the psychology of a person who is neither a complete rebel – as was Winston Smith’s lover Julia – nor a complete government lackey – as was Syme, the lexicographer of the novel’s fictional land Oceania.

Winston Smith is somewhere between complete rebellion and complete submission to the state. As the novel progresses, one is struck by the fact that Winston must literally die as a rebel, or figuratively die – i.e. lose his individuality, hopes, aspirations, critical thinking, opinions – as a propagandized, brainwashed, and amorphous cog in the sociopolitical machine that is Big Brother. One cannot stay in the center; he must die one death or the other.

This perhaps explains Nineteen Eighty-Four’s confused ending. For on the one hand, Winston succumbs to the government, snitches on his lover, and becomes a brainwashed ward of the state. Yet, on the other hand, this only occurs after the government spends a lot of time and energy and resources trying to capture him, torture the truth out of him, and “re-educate” him into submission. One can view 1984 as either decrying the hopelessness of a life lived under a totalitarian regime, or as pointing to the key to dismantling a totalitarian regime (viz. Unyielding civil disobedience rooted in an appreciation of one’s humanity and all that comes with it – love, hate, beauty, ugliness, art, creation, destruction, physical pleasure, etc).

Orwell did not seem to know the answer to the question of how one should live under a tyrannical government. The acute reader is left with a sense of horror not at the novel ending with Winston becoming a brainwashed ward of the state, but with the novel leaving one on his own. Winston experienced great things – love, sex, good food, laughter, camaraderie – but this didn’t keep him from folding when tortured by the state. Will the reader do the same under similar circumstances? Will the reader follow a different path, and resist even if it costs him his life?

What else can one expect from Orwell’s atheistic, quasi-existentialist7worldview? In such a view, it is the individual’s decision that determines all things. hope.

Sadly, and rather ironically, for an anti-Communist novel8 Nineteen Eighty-Four seems to identify religion in general, and Romanism in particular, as a means of suppressing critical thinking and political dissidence. Lindsay Dowty explains –

Orwell confronts the idea that fascist governments dispel religion to keep the people from unifying together behind it, >yet they humor the Church as a means of giving the lower class a reason to stay in the lower class. In Animal Farm, >Orwell makes minor allusions to his take on religion in the bigger scheme of a totalitarian society, much like he does in >his following novel, 1984.

Orwell’s 1984 is as much about an oppressive government as it is about losing faith within a theocracy. Winston’s >continual questioning of Big Brother’s existence and his need for validation through others points to a plot in which a >man struggles to come to terms with his disbelief in God. Winston is perpetually on the search for some inclination >from coworkers or friends that they do not truly believe in the Party, as well.9

Orwell’s Marx-esque beliefs about religion arose, in part, from his observation of the Roman Church state’s collaboration with fascism.10 For Orwell, it seems, the individual stood between two oppressive regimes. This essentially means that the individual doesn’t hope in anyone beyond himself, as he alone is responsible for saving himself.

And to some extent, he was right. Secular and religious authoritarianism are anti-Christian and, therefore, anti-human. Thus, in Orwell’s Oceania enjoying the divinely bestowed pleasures of human existence – food, sex, art, love, conversation – is illegal. Engaging in free thinking, free trade, free enterprise – these are all illegal as well. In the place of the Sovereign God, secular and religious authoritarians set up a representative who believes himself to be, in some sense, divine. And such authoritarianism was truly definitive of the Christian faith, then our situation would be as hopeless asf.

Despite having experienced much of what the state had deemed illegal, and having thereby come to experience the good gifts of God given to all of his creatures, Winston is broken by Ingsoc, the ruling party of Oceania. The threat of death seems to drive him to abandon whatever vestiges of hope he had in his ability to successfully revolt – even if only in his mind – against Ingsoc.

Could Winston have continued to rebel? Could he have brought about the eventual revolution of Oceania’s scattered hidden dissenters?

What we do know is that Winston’s plight is that of every man outside of Christ. Fallen man rightly sees many injustices, but seems to forget about all God has given to him that is good. What is good is taken for granted, while what is not good is amplified and used as an excuse for fallen man to continue on in his life of rebellion against God. And nothing temporal, material, physical, or social brings relief to him as he contemplates his hopeless existence. As Solomon declared –

…I saw all the oppressions that are done under the sun. And behold, the tears of the oppressed, and they had no one >to comfort them! On the side of their oppressors there was power, and there was no one to comfort them. And I >thought the dead who are already dead more fortunate than the living who are still alive. But better than both is he >who has not yet been and has not seen the evil deeds that are done under the sun.11

The answer is found in Christ alone.

For in Christ, one can come to understand the world properly. Christ is at the center of all things, upholding the universe by the Word of his power,12 seated and sovereignly reigning over the whole of existence and all of its parts,13 directing the course of history to this one end: The glorification of the Triune God through the gracious salvation of his people, the just condemnation of his enemies, and the renewing of all of creation.14 The apostle Paul declares –

…we have this treasure in jars of clay, to show that the surpassing power belongs to God and not to us. We are afflicted >in every way, but not crushed; perplexed, but not driven to despair; persecuted, but not forsaken; struck down, but not >destroyed; always carrying in the body the death of Jesus, so that the life of Jesus may also be manifested in our >bodies. For we who live are always being given over to death for Jesus' sake, so that the life of Jesus also may be >manifested in our mortal flesh. So death is at work in us, but life in you.

We strive to honor God by being salt and light in every corner of this sin-darkened planet, but we ultimately know that there is only one King who will usher in a righteousness that will fill the earth – Christ Jesus the King of kings and Lord of lords. We know that Christ will judge the living and the dead, and that we, Christians, have escaped judgment not because God has turned a blind eye to our sins, but because he has placed our sins on his Son on the tree of Calvary. Before the eyes of our understanding, in real time, we see that God did not spare his own Son from the penalty for sin due to us. Therefore, we are assured that the God of all the earth will not spare the unjust tyrants.We a have a living hope, one of which we have been given a forestaste time and again throughout history.

Unlike Orwell, Winston, and Julia, Christians have hope.

…in The Rebel, reminiscent of Orwell’s Animal Farm, one of the first points he makes is the following: “The slave starts >by begging for justice and ends by wanting to wear a crown. He too wants to dominate” (Camus 2000b:31). The >problem is that while man genuinely rebels against both unfair social conditions and, as Camus says, against the whole >of creation, nevertheless in the practical administration of such revolution, man comes to deny the humanity of the >other in an attempt to impose his own individuality.

At the time, the Catholic Church was collaborating with the fascist governments of Italy and Spain due to its vehement >opposition to socialism and democratic ideology. As an advocate for democratic socialism and a veteran of the >Spanish Civil War, Orwell began to view the Church as its own authoritarian regimen…the same way, he believed those >worshipping the Church were succumbing to a fad of “power worshipping” – or, idolizing those with power opposed to >the morals and ethics of the institution wielding that power…