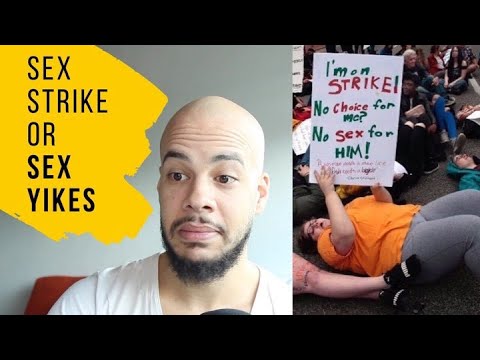 Alyssa Milano, a person whose name I know somehow, but don’t know why - called a few weeks ago for her fellow ladies to go on sex strike on account of certain republican lawmakers trying to ban abortion.

Now, while it’s generally considered unwise to speak about political beliefs, I’ll be honest about mine: I support abortion as long as it’s done early on in the pregnancy. I don’t think a baby should be brought into the world if it’s an unwanted child. Even children born into loving, two parent homes can have deep and lasting problems.

So while I think the human race has amazing & positive potential, the world can be a very dark place.

And since there’s no way to get “consent” to bring an unborn child into this world, I believe we should be able to abort unwanted children (provided it’s early enough).

That being said, my personal views are irrelevant to the topic at hand.

Alyssa Milano, a largely forgotten celebrity who does whatever she does - I'm not exactly sure - has rallied her numerous followers to join a laughable cause.

Let me tell you a few reasons why this is so dumb.

First of all, the people who make the laws aren’t having sex with Alyssa Milano.

Chances are, lawmakers aren’t having sex with her followers either. That means that an untold number of ill informed women are now withholding intimacy and connection from their partners, for something their partners have nothing to do with.

Let me ask you, how do you think the partners of these women will react to this?

It’s not only ineffective, it’s offensive. Again, I support our right to abortion. But the method Alyssa Milano employs here only strengthens the position of the other side, by highlighting how irrational the radical feminists have become today.

Just look at this lady, who has tagged onto Milanos cause. Do you think anyone is sad that she won’t have sex with them? If so, I want you to imagine the kind of man who would be upset that he can’t have sex with this nutritionally undisciplined, aesthetically challenged beast.

No sane women would withhold sex from their partner because of the actions of a random lawmaker. And the women who would do that, only widen the divide between men & women.

Sex is a beautiful thing, arguably the most intimate way that humans connect. It’s like withholding hugs or eye contact from your woman just because Hilary Clinton is a. Just because a couple women in power have a different viewpoint (and that may be scary) is that any reason not to engage intimately with your partner?

The implication Milano makes is that women’s vaginas are a prize to be won, a cookie that can be taken away from the “man children” who are “misbehaving.” Now, she’s certainly not the first to do this. In fact, this narrative is so common that you can even find PG tv shows and movies that openly play with this exact dynamic.

There are some deeper dynamics at play here.

But those are for another time.

Check out my other videos:

Reddit Social Skills (#3) Can't Get Myself Out Of Bed, What To Do?

Check out other videos from this playlist:
https://www.youtube.com/playlist?list=PLox3r7Bgl4MX9mLOLTOhEr8UQrm2IohrW