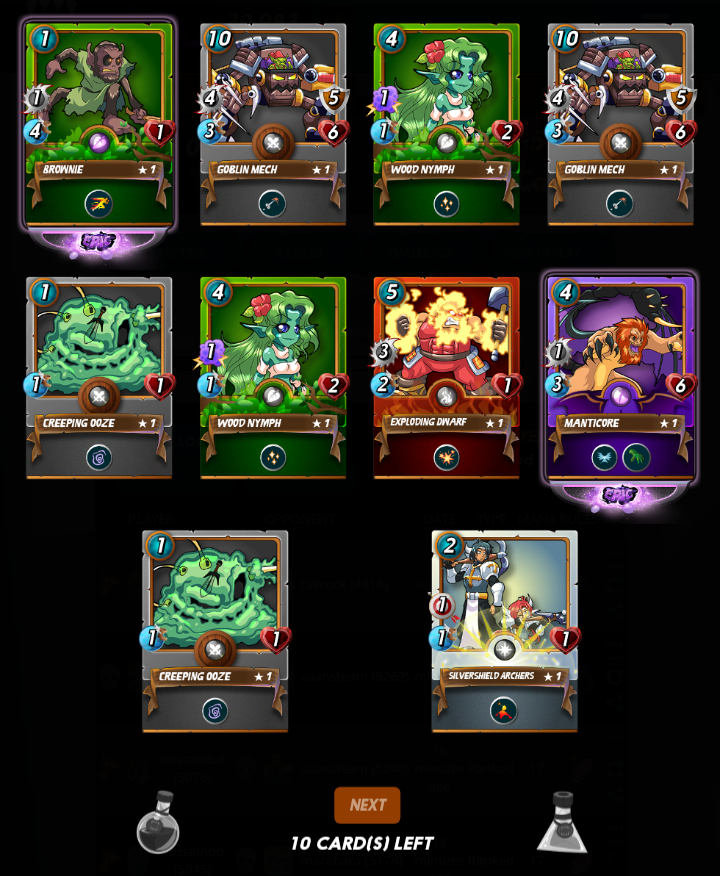 Hello everyone!! Hope everyone is good? i know everyone trying to do they're best in the game I'm also! even today I played very well there, I'm at top 7 which is incredible but I did it and trying to stay there.

Today got twenty card those who have two epics brownie and manticore and rest eighteen are common card, check below.

Today, I have won the Quest's five battles easily if you see the screenshot above, there you will see the battle with Earth Splinter the green team, although Quest is difficult in the Champions League but I still complete the every day quest

Today i play two tourney with the hossainbd first i couldn't do well in the league of champion but i won a alpha tourney which was 2am at my time And there I was the champion and i played against @simoneg he is a very good player and won the second place there congratulations! you played like a pro.

All screenshot captured by A5s (oppo)

Thank you for a very enjoyable game.

At first i thought this post was just another one of those what i opened super super boring posts.
But you have some actually good words to say ... too bad it started off with the BORING image of what you got in a post.
Sometimes people have too many words and not enough visuals. But in this case your visuals could be toned down a bit or made smaller.

So for half of a good post I'll send an upvote your way.

(because you seem to be the type willing to take advice)
Consider being unique and providing interesting content. Meaning better main diversified thumbnails and not doing the "what you got" screen shots.

I use canva.com for better more insightful thumbnails.
That will give a heads up to the user what you're writing about.
If a post repeats itself with the exact same content each day then what use is there for any user to read it?

Also giveaway posts are BORING and not unique in any way... seems like you could do better engage the users more... educated them, excite them by possibilities and a long term interest in the game instead of a momentary free thing worth a few cents.

Just because you see others doing both these styles of boring content doesn't mean they'll ever be successful... most of them are just using it as a way to impliment a vote bot. But I think you have the ability to actually provide actual content that people find worthwhile.

I know you also get insights from @davemccoy so i'm interested to see what he has to say.

I think its awesome that you took the time to read the post @jarvie... and to give @hossainbd some good advice. I agree with what you said and definitely think you know more than me about great posts. I'm sure @hossainbd will read and learn from what you wrote and hopefully apply many of the things you said. In particular I think he does have a lot of interesting things to say, he is an extremely smart person and has learned the game at a level most of us won't know. Those insights can be shared and would be something that definitely provides value to all!

Thanks @jarvie! Your help is much appreciated!

You're right @jarvie and thanks for letting me know about this issue, my daily quest card posts are very small and uncomfortable I know that many people are doing the same job i should not say it because I should see what I'm doing but our problem is that we are not talking about anyone in this case, if I have a lot of troubles before about these posts then I could not do it again. And the main fact is I'm not good in english even not a writer but I'm a player that's why I just play and when i get the time of the post, then do those unstable posts.but thank you, hopefully it will not be in the long run.

I'm guessing you have lots of insights about how to play... and also the state of the top game play. I'm gonna add you to my splinterlands list on steempeak and hope to see some of those unique posts if you're up for it. Honestly there aren't very many users creating original and still frequent content about splinterlands.

Okay @jarvie Just tell me how can I get started? If I once started sharing my strategy with everyone hope everyone will find a way to do they're best in the game. Although my writing will not be as unique as everyone else, I will try my best.