Steemmonsters : Find out about my mistakes 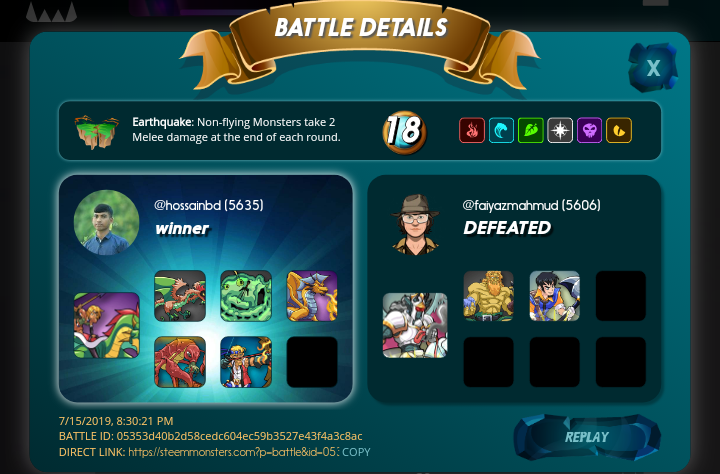 Hey steemmonsters battlers! About 24 hours ago in the sm server, @jacekw created a quote with the battle of mine and faiyazmahmud, where I was described as a thief, and now I try to highlight the value of the two battles. First of all, I apologize to all of you for that mistake. Now i want to describe the situation. Before i start the discussion, i should clear one thing, for all of your kind information, @faiyazmahmud is not my alt account, but also he is a good & close friend of mine.

I was playing for a boost to go the top. So when i got matched with @faiyazmahmud in a battle, I was on a winning streak and my rating was 5593(4th place) in that time. And faiyaz were at the 3rd place with 5627 rating points. After being matched in that battle, i wanted to keep the winning streak and doesn't wants to lose. Maybe i could win or maybe i could lose that battle if we played fairly. But, since faiyaz is my friend i just tell him 'if you lose the game, i could go to the 3rd place.' Even i was not sure if he will do it or not, because he was also in good position in the leaderboard. But then i see he surrendered by putting only 2 cards which was worthless in that battle. If i knew he will surrender the battle, i would take earth splinter because i had the quest with earth splinter. So, it was the story behind first battle.

Screenshot of first battle against @faiyazmahmud

And after couple of battles again i got him in ranked battle. And this time he said 'go win', so i take earth splinter to complete my quest. But I didn't said to lose him again.

I playing @beeyou account since three seasion in tourney and hossainbd is a delegation deck which i got from @beeyou When they was talking about my battle in sm server she dm me immediately that time but I was sleeping because I had a duty in the morning because of which I could not answer but when I woke up, there was a huge story, so I was silent all day, Ive was somewhere I did not even talk about the issue and i got a tag "cheater"

My opinion about the issue

I apologize once at the beginning, still forgiving because I made a mistake, I do not know if someone has done the wrong past? I do not care if anyone do, because I am wrong I should be punished, and I have already been convicted - I received downvote all my posts in one week

And then our teammate @simplymike and coach @davemccoy talked about this issue in sm server then i got three upvote from @tipu I still do not know who gave them? Because I did not ask them, but after four hours I got two down-votes from @decuration again.

I do not understand yet, what's going on? Why did they give me upvote, and why did downvote again? The first downvote was for my mistake, I did not have any problems there, but why the second downvote? I just really tired of this issue

Can you people solve it? If not then tell me what should I do?

Thank you for apologizing and move forward. Good luck on the new season and I hope you do really well! :)

Thanks you too sir!

Good question... if my sister was super high up in the ranks and I came up against her... hmmmm... i wonder what I would actually do in the situation. Not just what you think you would do... but what you'd actually do.

Thanks for the comment @jarvie yes, I also do that when I play cricket on the field, but the main thing is that I made a mistake and I do not know what i will do now!

If it's sister.. you should let her wins @jarvie 😂😂😂 because she's the queen.

You are not cheater or even a thief!
They don't know who you are and who faiyaz is judt becausr you helped each other out.

Ypu are doing good brother! Keep your fighting spirit.. go play better and be the best. Let them do their business.. you have a lot of support from everyone else.

I know that @cicisaja and thank you now I have only one option and it's - play, I just want to play, even though I do not know what I will do?

So.. just play the best you can as usual and keep sportive😉 show them you're the best player and never give up.. no matter who your opponent is

Whilst what you did was probably not in the spirit of the game, it was certainly not outside the rules. This certainly isn't the first example of that - e.g. bots mining daily quest rewards when packs were on offer - and I would be absolutely shocked if there hadn't been examples of players forfeiting battles against their alt accounts anyway.

You've taken on board the feedback provided and learned from your mistake so it's time for everyone to move on. It is, after all, only a game.

To borrow from one of my daughter's favourite Disney films, it's time to.....

Yes you are right but I can not criticize others' blame, because I have made the mistake but I can give my best in the game and I will do what I need to do for game thanks @sparkesy43

We all make mistakes @hossainbd and you both have learned your lesson. I know you both didn't have ill-intent. Next time, play your best even if it is against another guild member. You are a very good player and that is why you have my deck. Play true and honest, have fun, and the game will be a better experience for everyone.

oh please let that be an option! I am so looking forward to the feature. I really do hate it when I run into guildmates and having an option where we wouldn't bump into each other would be awesome. It solves a lot of problems with alts playing against each other and ranking their way up too.

I understand what you did, and I am sure many already did, no prob for me.
If you reached up to position 3 I guess he wen t to 4, it only changes the outcome to you two, no one else was impacted, right ? So again, no problem

Yeah, you're right, but they did not understand that at the beginning. If I used to grab the first place then they would have been more critical of it.

Yes, that's true.. I was let you win those battles, but i was angry on you that time. I didn't want to lose, because you know i was at the 3rd place & you were at 4th place. But since you said, i did it in against my wish. And after this battle, i lost some other battles and lost around 100 ratings... 😠
And i was so angry on you that time.. I know there was no fault of you in next battles where i lose, but it seemed to me 'I lost my momentum in that battle'.😠

You may remember, i was keep losing after that battles. You said me to stop playing, but i didn't because i was angry on you. 😑

Now, i want to say something to SM players. "My intention was not to cheating others! I couldn't understand it could be cheating or something like that. 😔 Since, this mistake was done by me I apologize to all of you, 🙏 and i can make sure that, We won't do any kind of mistakes in future

Thanks for reading. Enjoy the game, happy battling. 🙃

Nice conclusion @faiyazmahmud 😉 I should've known it.. if you are losing to a player then you'll kee playing until you win again 😂😁 see.. you play it emotionally at that time.
So.. next time things like this happens between you two.. I'll ground you at the bathroom.. no steemmonsters playing for an hour! Got that 😜

Haha.. i will obey your order.. after all you are our captain. 😉

Okay bro, I'm sorry, i know that you couldn't come to the top 10 for those battle but you have a chance, all card, strategy and luck so if you want, you can do it at any time but but one thing we should be kept in mind "no more surrender from today in battlefield" happy battling bro good luck

You are a great player and you do not deserve so much negativity for such a small mistake.
I know how hard it is gain momentum on the last day of the season. Try to ignore the haters and just kick ass and have fun on the battle field.

I know you won't ever do anything like that again @faiyazmahmud! Its great to see you understanding things and accepting responsibility. If you do that in your life, you will find that you will go very far and have much success! Great job :)

This was a small mistake, but some people are blowing it out of proportion. I know you are a great player and a rising star in the SM arena. It sucks that you were tagged a "cheater", but you need to ignore negativity. Haters will hate, so just kick their ass to shut them up.

As for the down-voting, there is no way control people's actions. I hope it stops soon. Try to ignore negativity and keep being you.

Thanks @mellofello I'm happy to see you in my comment box, and i don't have any problems about that now I'm okay. I will fight with them in the field nothing else.

I think no need to ask apologize from others. Because most of them are cheaters.
a Top abuser fighting against you. Just take a look at they are steemit shit posts.
You're a good player. Play well and beat them all .

Im a top "abuser"? Really? I spent several thousand Dollar to flag Haejin, i was at minus 5 Reputation after this flagwar, mind your words boy.

we have talked about sm related some maverick abusers. You guys didn't take action against them immediately.
but in this case you reacted immediately. i don't know why. Maybe he can't fight back against you.

fighting against abuser should be appreciated. but what is the difference between yours and Haejin's post?
You are posting same image without any text every day and get up to 2.5 $ valuable votes.

Do you think your post will help in this community?

Great move. I'll stop flagging and will remove all my flags.

You are a gentleman. Very classy move too.

That's awesome @tufkat, and thank you for taking the time to understand the situation! Impressive!!!

You did well! Being at top, people watch everything you do. Best of luck in the future :)

You too @vaansteam you are a great player! And your game was awesome one hour before the end of the season. btw thanks hope you will grab the top position this season

Good idea to make this post, @hossainbd. And I'm glad to hear it has been solved. 👍

Thank you too dear, I will not forget about your work 👌

Sorry I wasnt really around for the last few days @hossainbd. I'm not going to add too much to what has already been said in here, but I can guarantee you that we all understand what happened and know that you did not intentionally try to cheat. Besides, I think this happens a lot more often than what many people would like to admit to. So keep your chin up, and continue to show everyone what a great player you really are.