Despite empty shelves, there isn't a shortage of food — Here's some reasons why. 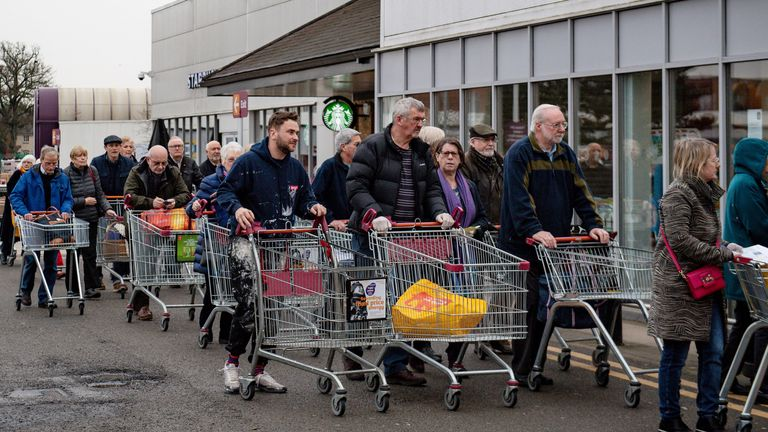 I don't expect people are going to go hungry in rich countries due to the coronavirus. My reasoning:

• The fraction of the population in these countries involved in food production, processing, distribution and grocery sales is not that high — surely under 5%. This means many of them can and will keep going as 'essential workers' even under a suppression strategy.

• It also means that if some of them are unavailable due to illness they can be replaced by hiring people from the remaining 95% of the population. While some of these jobs are highly specialised, others, like truck driving and retailing, could be replaced quickly in an emergency situation.

• There's lots of slack in the system and margins to push on. We could probably eat 10-20% fewer calories for a while and it could even be good for our health. Food processing factories can reduce or change their range to increase throughput (and indeed already are). People sitting at home need less food. We can be more careful to reduce food waste at each stage. Etc.

• Stockpiling early in March will have kicked the system into high gear. Everyone knows food is essential. There will be a big effort to stop people going hungry from businesses and governments.

• While a shock to the system, the pandemic is not like a nuclear war. We have had weeks to adjust and still have a few more. The world has a few months worth of calories sitting around, which sounds like it's probably enough of a buffer for this one.

• International freight is still mostly moving and doesn't account for any meaningful fraction of cross-border infections. So it should keep moving.

• I've heard of no reports of people starving in China, or Italy, or elsewhere.

I've stocked up with 45 days worth of calories, but I now think this is an anti-socially large amount, so plan to draw it down before buying more.

The above is just an amateur take, so shouldn't be completely reassuring. But there's a lot of things to worry about these days, so I'm inclined not to think much more about food for now personally.

on a reg basis they often have a great deal of food expire or go bad, be wasted and tossed into the garbage, I bet mubeing wasted these days😊

No doubt a lot of it will be wasted even if bought and stockpiled as they struggle to consume it before exp. date. In either case, it's not like people kick their appetites into high gear because they're suddenly more sedentary than usual, and likewise, producers don't expect in the medium to long run that excessive short run food demand is going to sustain.

maybe you didn't understand the comment🙂, I meant that for the suppliers there isn't much being wasted these days and that is evident by the empty shelves. There are some businesses that even run solely on food donations (produce) from local grocery markets to make things like juices, produce they will throw away that isn't sold, and at several stores I have seen including my own there is next to nothing in terms of produce available right now, but they keep trying to restock so I am not really worried long term. If it gets as bad as some ppl suspect then I bet there will be next to nothing wasted seeing as people will obv eat anything so that they don't starve🙂 ✌️

I personally would like to see a return to frugal living. If that means understanding you'll eat what is available, instead of being spoilt by choice and quantity for a while, then that's good. Maybe some of us might even start homesteading.

The reasons the stores are empty is the kids arent eating at school and their parents are having to feed them, those bottomless pits, and deal with the shit the teachers have to deal with.