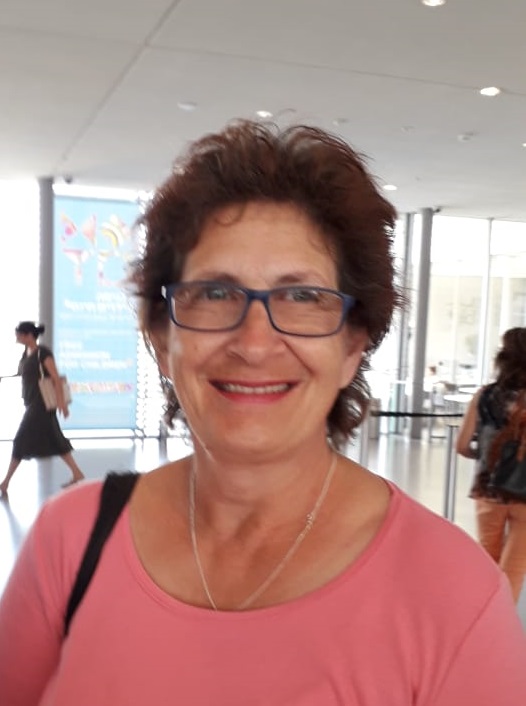 My name is Evelyn Penelope Thompson, but my dad, may his memory be a blessing, started calling me Pene when I was 4 months old and the name has stuck. I live in a beautiful, small coastal town in South Africa called East London, in a long-established suburb with beautiful trees everywhere. When I first saw the place, I thought it looked like the Garden of Eden, and I still do.

I work as an administrator for a Trust, I love writing and for fun, I mostly study Hebrew and the Torah. Just this week I was accepted as a Talmidah (student) at a worldwide virtual Messianic Yeshiva. I’m still on the introductory part of the course and I can’t wait to get stuck into Jewish History and Torah and good stuff like that. (They gave me a 100 percent sponsorship because I’m from Africa).

I was born again 30-odd years ago at a small church in Hillbrow, Johannesburg and I have never wavered a day or even a moment since then in faithfully following the Lord. In 2017 I started learning Biblical Hebrew online with the Hebrew University of Jerusalem and got through 3 of the 5 years, bailing due to financial pressure. In 2018, I went to Israel with a friend I met during the 2nd course. On the plane there, I remember saying to my Lord: “You’re taking me to Your people, Lord!” – when I came back, I said to Him: “I AM one of Your people Lord!”

I am twice married and divorced, my second husband has passed on, sadly due to drug usage. I have a total of 6 children from both marriages and one grandson of 6 years old. I love him very dearly and am praying that Abba will give me a second chance with him. I want to be able to teach him the Ancient Paths as I was never able to do for my children because I was not walking in Torah when I raised them, alone.

I was raised in the Methodist church by parents who didn’t go to church often. Even so, I have always loved God, and strangely enough, the Jews, even though I never really truly understood who they really were. I have found out in a very roundabout way that one of my father’s parents had a Jewish connection somewhere, though I have no way of finding out now because they have all passed on. I remember words my granny used to use at home, which have turned out to be Yiddish words. Now, if you ask me, it’s only a Jew who speaks Yiddish.

I was always a good child, but when I hit 16 and started dating an older boy with a motorcycle, I began to go a bit wild. The wildness got wilder and wilder until, at the age of 26, I ended up at that little church looking for Jesus to save me from myself. And He did, quite dramatically. Everything changed for me instantly. People who had known me for years couldn’t believe it was me. What had happened to me?

I last attended a formal Hebrew lesson in 2019. I have no one to practice the language with, but I try to read at least a part of the Torah portion each week in Hebrew. I have added some things to my life very recently to help with that. I attend a live online Torah class on Tuesday evenings, I try to use Hebrew when I pray with my Siddur as much as possible. My newly begun studies at the Yeshiva will no doubt also help. I watch Messianic services and teachings online (as we don’t even have a Synagogue here, never mind a Messianic synagogue), and of course, I am now also part of Holy Language Institute. I really do believe Hebrew IS THE Holy Language.

I was clicking around on the Internet looking for something to show a friend to explain that in the New Testament that when Shaul (Paul) was talking all night, and the young boy fell out the window, it was a Havdallah service. I explained that they were meeting after dark on Shabbat, which is when the first day begins. Sadly, that friend never could receive anything positive about anything Jewish or Hebrew and she has since left my life. It was while on this quest that I found a one-page article by Izzy (who I had never heard of before) on the subject. That led me to YouTube to look for more of his articles, which is when I found those 4 or 5 videos introducing the Mishnah. When he kindly gave me a 6-month sponsorship a few months ago, I devoured them. Now here I am, back in full force. I am part of a small Messianic group here in East London and shortly after I found Izzy, I approached our facilitator asking if he knows about Izzy and HLI. Oh yes, he said, we tithe to his ministry. I was very taken aback and said to him: “So, you’ve known about this wonderful ministry with all these teachings and resources and you’ve kept it from us all this time???” – Anyway, I am here now. Praise Adonai.

My story is very long and involved and I anticipate sharing more with others at HLI as time passes, but for now, I think I will close this missive with a current issue in my life and ask you all to keep me and my family in prayer, as you’re able to. My eldest daughter, Rebbibim, has recently walked away from her husband and 6-year-old son. My grandson is suffering a lot and I think his little heart is probably breaking and I can see he is having such strong emotions that he doesn’t know how to handle them or deal with them and we’re having lots of toys being thrown out of the cot. I don’t know what will happen, but I ask Adonai to protect my grandson and not let anything that is happening to him permanently damage him. I pray Abba will set His angel over him at all times. His name is Juan-Dre, but I have given him his Hebrew name, too – it’s Arye’El.

I would love to be in touch with all the people here at HLI. I’m now on Marco Polo, but my personal account is still not active and I don’t know how to make it so. I am in correspondence with the tech team at MP, and hopefully, they will help me sort it out soon. I don’t have Facebook, but I do have MeWe, although I don’t go onto it much. I mostly use WhatsApp, Telegram and most recently Signal. My phone number is +27 63 138 7488. I also have email: penny.penny.thompson@gmail.com. I have Zoom and Skype as well but don’t use them often. On Skype, my name is Penny Thompson, I think. One thing is for sure, I think my level of tech-savvy will deepen at HLI! Right now, it’s about below Zero!

Thank you to everyone for making me feel so welcome. When I played your video, Izzy, for my son, where you thanked him for helping me, he just grinned and rolled his eyes!