Say hello to my new little friend... The Scorpion King! 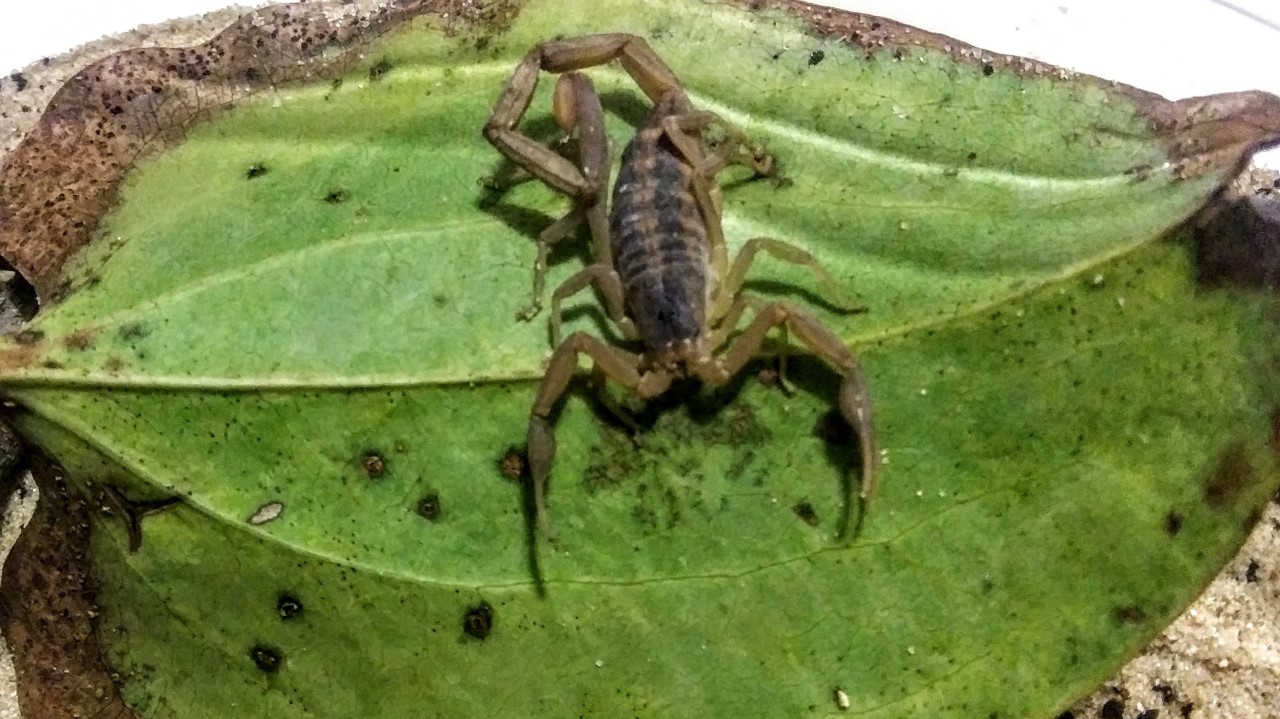 Amazingly enough, after 30 years of growing up catching all the snakes and lizards and every other critter and creepy crawler you can think of, this is only the second time in my life I have EVER held a scorpion. Now I have one as a pet!

The first time I ever held a scorpion was one of those giant Emporer Scorpions at a pet store in Florida like 10 years ago. I remember the guy at the pet shop picked it right up and put it in my hands. It was big! I had to hold it with two hands letting it crawl up my arm and stuff. It was cool!

But this scorpion, is tiny! And fast! It was hard trying to get any decent pictures of it. I tried several times to make a video without any luck.

It turns out this is the only species of scorpions found in Arkansas, the Striped Bark Scorpion. Unlike Arizona where they have several dozen different species of scorpions roaming the desert. I know when you think of scorpions you think of this big ugly creature with big pinchers and a scary tail. Like how pist off was god when he created this thing? Cross a crab, with a spider, and a wasp!? WTF!? And you got a scorpion. But this one here is actually kind of cute. It only gets 2 and a half to maybe 3 inches long.

So this is awesome! I got a scorpion as a pet! How cool is this???

However, I might have a slight problem on my hands... HA HA!!!

Of course you know this doesn't end well and leads in to an even funnier story HA HA. Everybody's money should be on the scorpion.

So I'm trying to make a video of this thing. It's crawling all around my hand. Then it starts crawling up my arm onto my hawaiin shirt and then down my back. Trying not to hurt the scorpion I took my shirt off so I could catch the thing. Not seeing it, I put the shirt on the floor thinking it might of still been on my back or even in my hair. Not a second after stepping into the bathroom to look into the mirror, I hear Zeus let out one of the funniest sounds I ever knew a cat could make HA HA. It was the weirdest most squeakiest little shriek that I ever heard HA HA. Which of course meant there was the scorpion HA HA. Of course it didn't take long till one of us got stung. #dipshitdemocracy That's what I get for taking this thing out of the cage.

Zeus, being the cute little six pound quirky little ball of fur that he is had to learn the hard way HA HA. Don't worry Zeus is fine. So is the scorpion. He must of just lightly swiped at it, enough to get the scorpion to sting his paw. After he yiped, or whatever you want to call it, he ran and hid under the futon. After a few minutes Zeus came back out and was fine. This scorpions sting is so small and weak that it won't hurt you. It just feels as bad as a bee or wasp sting. It might swell but that's about it. Zeus's paw didn't swell up or nothing. He must of gotten a warning sting HA HA.

So this means only one thing...

Here it is I've let snakes bite the Hell out of me all my life. Seriously, when I grab a snake I grab the damn thing like I ain't fucking around. I might even be dumb enough to swan dive into a pricker bush going after a snake. Their bites don't hurt so I don't care. I ain't afraid of them. However, being only my second time ever handling a scorpion, I've never been stung by one. So I don't know? Seeing how that little sting didn't do anything to Zeus but make him yelp a little and run away scared, I don't think getting stung by this thing is going to hurt. But I'll save that for another time ;-).

Soon though I promise you some #dipshitdemocracy involving letting this thing sting me HA HA. I just hate that I let Zeus get stung. Don't worry it went back in the cage shortly after that HA HA.

No cats, scorpions, or dipshits were harmed in the making of this blog.

As always I'm Theo aka Rainbow Man and here is the PROOF!!!

Congratulations! Your post has been selected as a daily Steemit truffle! It is listed on rank 3 of all contributions awarded today. You can find the TOP DAILY TRUFFLE PICKS HERE.

Wow that's an old picture of you @papa-pepper! When was this?

Haha! Wow Rainbow Man that's such a wonderful present. For you. lol. I hate those things because they always surprise me, I'm glad most of them around here are small like that. What do you feed that thing?

Right now I'm feeding it crickets. I'm glad it's small too. It is actually more docile then you think. I haven't been stung yet and it hasn't tried to sting me yet HA HA. It kind of tickles when it crawls on you HA HA.

That is just too creepy for my Rainbow Man! Snakes and scorpions creep me out so I'm in the wrong part of the country. lol. Good on you though, let us know if you get stung!

Man you are straight-up crazy I would never let a scorpion sting me.

Definitely shake buy shoes out and will aim to kill if I see with intent the advancement of a scorpion towards my person.

I've chased snakes before and plenty of bites from them. Luckily only from non venomous varieties.

You definitely have to commit to either getting a hold of it or getting rid of a dangerous animal. That is if you are going to mess with it at all. Distance is the best thing when a wild animal is involved.