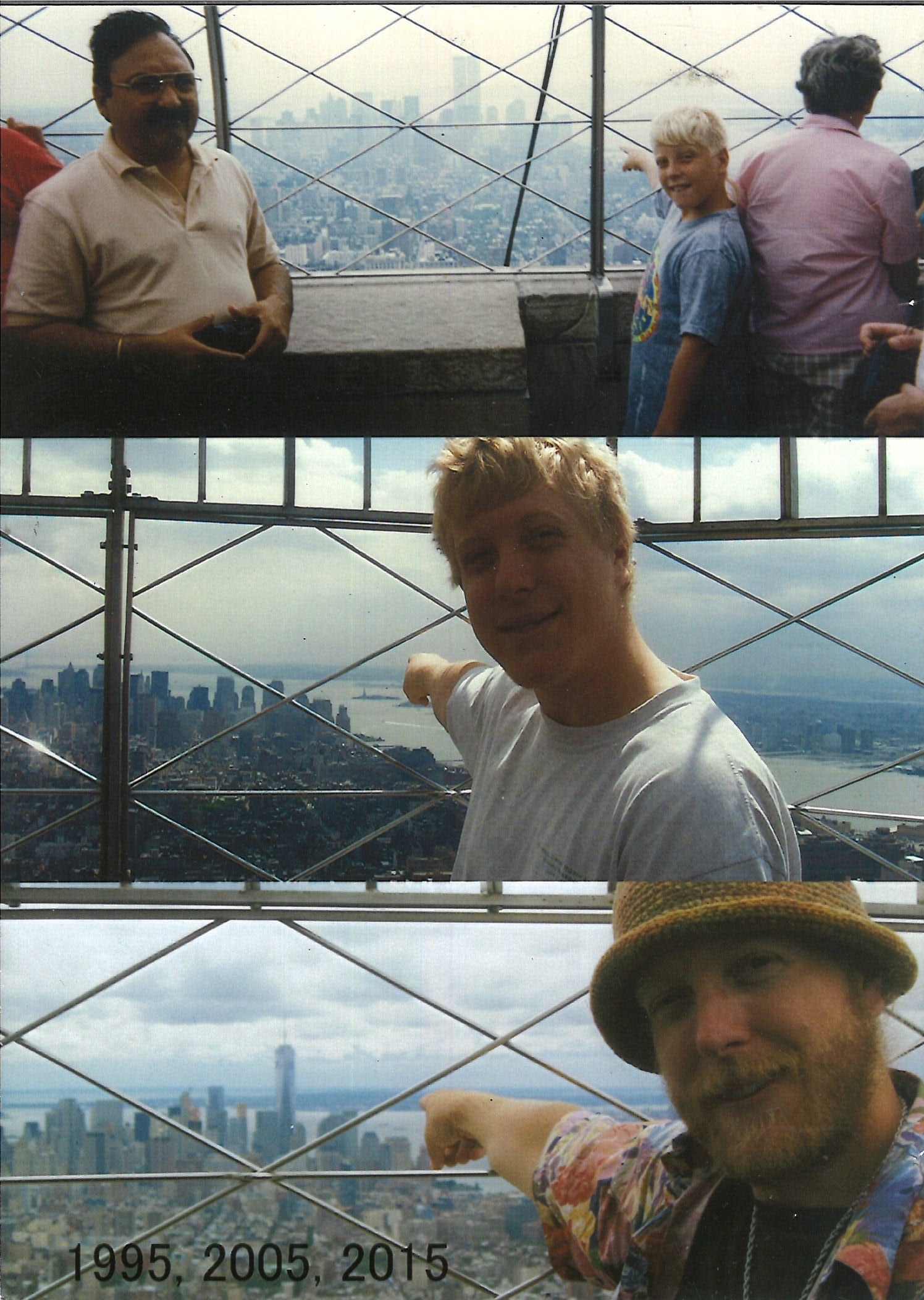 Instead of boring you with a bunch of 9/11 truth crap that you probably already know and that several of you all already will be bombarding the Steem blockchain with, I'm going to share my epic New York City pictures.

I have old family roots in New York. I'm sure several of you reading this do too. I used to have a family member, my aunt, that lived in Manhattan. As a result, 24 years ago during the summer of 1995, I got to visit NYC staying with my Aunt. I was 11 years old. One of the things we did was go to the top of the Empire State Building where I had my first picture taken pointing to the Twin Towers.

10 years later in 2005 I was fortunate enough to visit NYC again, and go to the top of the Empire State Building again. Only this time, I had a picture taken of me pointing to where the Twin Towers used to be.

So without further adieu...

I know the camera angle makes it look like I'm pointing to something else but I'm pointing to the Twin Towers alright. It was hot as Hell the summer of 1995 in New York. In fact, I remember there being a heat wave in the city that summer and temperatures reached a record high of 116 degrees. I got what was called the buzz cut where they shave your head and leave you with a long tail in the back. The other people in that picture were other tourists that got in the way of this picture. Anyone who has ever been to the top of the Empire State Building knows just how crowded it is from all the visitors.

Picture two it looks like I'm pointing to the Statue of Liberty but again that is the camera angle. Hard to believe I used to have short hair back then too. I hate that they have that cage like wire crap up. It makes it impossible to get any decent pictures of the skyline when you are up there. Of course they need that crap up to prevent Tide Pod eaters that just got their pussies grabbed by Trump from committing suicide. And believe me NYC is full of those fuckers! That's why I don't live there HA HA.

Now in six years, I'm going to have to make a 4th visit to NYC and make it an epic quadrilogy! I often joke about pointing to a giant pile of rubble come the year 2025 HA HA. Who knows, will we all make it to the year 2025? What will be left assuming SHTF between now and then? Perhaps nothing. Only time will tell.

Thanks for looking and have a happy 9/11!

That's a awesome photo group.. spanning that much time too.. this shit should be in trending...

Thanks Dave! Glad you liked my epic trilogy.

tipu
🎁 Hi @hippie-witha-gun! You have received 1.0 STEEM tip from @davedickeyyall!

Epic, I went through jfk one december night on my way to germany.

These photos are really awesome. How cool that you were able to experience this.

Thanks Beth glad you liked them. I wish they were better but I'm going to have to be happy with these the way they are. My Aunt was too far away she should of been a little closer whenn taking the shot. I've been wondering if I should crop the tourists in the picture taking them out but doing so changes the way the picture comes out. So I just got to leave it as it is.