My review of GitS with actors 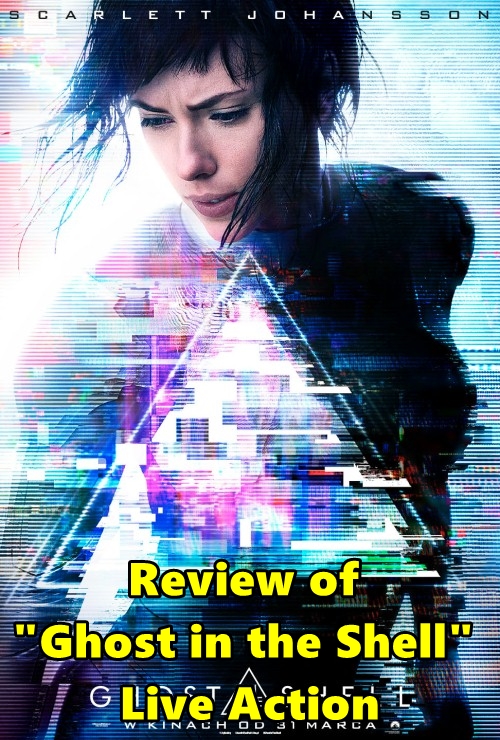 You can watch it here: https://www.amazon.com/Ghost-Shell-Scarlett-Johansson/dp/B06Y5S477B

I've been waiting for this movie. I had quite high hopes for it, but on the other hand I was not ready for an amazing spectacle. I got the product I was waiting for. It is not without its drawbacks, but it shows quite well that it is really possible to adapt anime to "movie language". The creators reliably transferred many scenes taken from both cinema films (with an emphasis on the first, the one from 1995) and the TV series. I was not dealing with a poorly done job, as in the case of the 7th part of "Star Wars". Cult or even better scenes from the above mentioned were transferred here, in most cases, very naturally and sometimes quite subtly. For example, conversations between characters, some sequences in which I was wondering if I was sitting at home and watching a certain fragment on YouTube. Not to mention the short moments that tell a lot about the character (this is where Pilou Asbæk in the role of Batou shone in particular). Some, however, were unsuccessful, but it did not bother me in the session, because the rest turned out well enough that I can forgive minor mistakes.

"Ghost in the Shell" is a popular brand whose film adaptation from the very beginning raised some controversies and fears. Many manga fans did not believe that Americans could adopt "Japanese Fairy Tales" because "Dragon Ball Evolution" was not, to put it mildly, too successful. In my case, it was a bit different, I followed the production from the beginning and many things indicated that we would get a reasonably good movie. The creators approached the prototype with due respect and in most cases fulfilled the task entrusted to them. From music to the selection of actors, set design, general quality of special effects, ending with the rendering of scenes to famous fans of movies and series. However, there are moments when they are not so "special", eg in my opinion, a certain cult scene from the end of the anime from 95 'turned out much less spectacular than in the animated version.

The plot is not bad, although some may raise their voices that the 2017 adaptation is a profanation of the original. It could have been better, and it can be quite painful at times, but I don't mind. You had to reckon with the fact that the production must primarily earn money, so some plot simplifications were necessary. It is true that some plots were simplified or worse executed than in anime, but as far as I am concerned, I am willing to forgive it, after all, the first adaptations of American comics were also questionable qualitatively. It is simply a good "golden mean" between a pleasant "popcorn" and a more serious film story.

It is true that I am generally a supporter of the closest possible film adaptation, but I am not a purist who does not tolerate changes as long as they are good and justified (although on the other hand, I do not like changes in iconic scenes and usually only tolerate the original). For Ghost in the Shell, however, I preferred a rather loose adaptation of the 1995 movie with scenes from the TV series. It just turned out too much and I didn't want to watch the adaptation "as to the line." The leitmotifs of the adaptation, that is: people and their identity, personality in the face of the progressive robotization of society, wondering what really is "life" etc. I really liked and were properly and quite well presented. Nothing new has been invented in this matter, but it's nice to see a quite successful "spin-off" of "Robocop".

Most of the songs used in the movie are really nicely composed and blended into the background. Fortunately, there are probably no "remixes" at all (but maybe it's the fault of my bad hearing), the creators chose electronic music, which perfectly complemented, among others, with the city project. Some of the tracks also gave me the impression that they were inspired by this genre from my early youth. I very rarely listen to songs from movies, but in this case I really consider buying a soundtrack CD. And I think that's a suitable quality stamp from someone who doesn't know much about music.

I mentioned the city project, it's amazing! I suspect that I will not be the only person who will associate "GitS 2017" primarily with its brilliant scenery. Streets are gray, not sterile clean like in many movies for a long time. Neon lights, holograms, the play of different lights, an idea for all of this ... it creates a really beautiful picture. Some may lynch me, but I think that the scenes depicting the city "living its life" are better performed in the 2017 film than, for example, the cult parade sequence in China or Japan (I mean the second cinema film). As I mentioned, some moments in the movie are straight out of the anime, sometimes we get the impression that the creators cut and pasted scenes into this image.

As for the actors, Batou is my favorite character. Pilou Asbæk has been a completely unknown actor to me until today. It is true that I still think that it is too little "packed" and does not arouse such respect with its dimensions, but it is a small detail. Everything else was as it should be. Just like his animated prototype, he is both a nice, good and funny guy and a "bull" who can scare and show his claw when needed. I also liked the game with his face and the emotions he portrayed with it. Scarlett Johansson as "Major" (Polish translators gave exceptionally bodies, this pseudonym does not change) was admittedly quite "wooden", but her "Rasiakowość" turned out to be an advantage here. And I still think this is one of the best choices for the role of Makoto "Major" Kusanagi, just to get her the right hairstyle and she looks like her! This is not an outstanding role, but she perfectly embodied the character entrusted to her. It was nice to show repressed emotions, natural body reflexes to effort, pain, worse mood, forced smile. By the way, it's hard not to fall out like playing the role of a cyborg. Takeshi Kitano as Aramaki did really well! Various "philosophical wisdoms" were nicely interwoven, which were often used in the prototype for its role. I particularly remember the one about "The Hare and the Fox". The actor behind Kuze was just "fine" and I also liked the role of Juliette Binoche, who played Dr. Ouelet.

Overall, I'm happy, the movie didn't knock me to my knees, but I got a lot of fun. I did not leave the cinema a bit disappointed, even if some fragments were not very pleasant, the overall impression left a positive impression. I hope that the film will earn as much as possible, and maybe we will see the next parts (only I got the impression that the creators are looking for a sequel?) Or "Ghost in the Shell" will turn out to be the beginning of a good change when it comes to adaptations of stories known from anime? May it be so, you can have many objections to manga, but it really hides material for at least several dozen very good films. "Ghost in the Shell" is one of the better examples. It could have been better, but not all beginnings have to be spectacular. It is enough if they are simply good and solidly made. From me +7/10.