A spoiler-free review of "First Man" 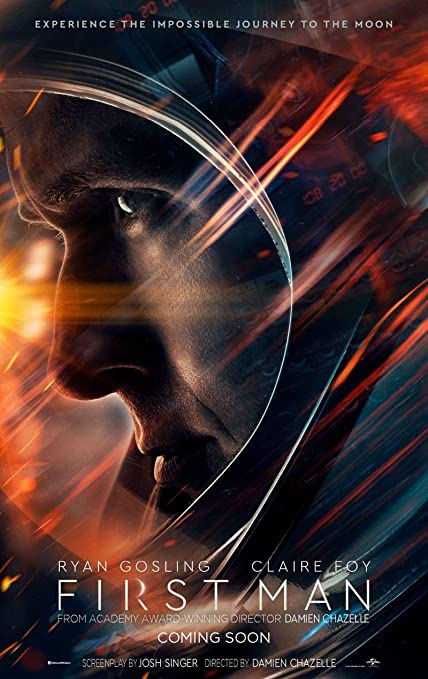 You can watch it here: https://www.amazon.com/First-Man-Ryan-Gosling/dp/B07J253VYL

When I heard about this movie for the first time, I wasn't very convinced about it. I expected another typical Oscar-winning production. The announcements made me more optimistic, and the first reviews convinced me to go to the cinema as soon as possible. After the screening, I can say one thing - this is the best space exploration film I've ever seen. A great combination of extremely realistic images and solid action cinema. Music makes a good background for the whole, every actor seems to give as much as possible. As the icing on the cake I will add that the script was brilliantly written and after the screening (as rarely ever) I did not have the impression that there was something superfluous in it. Each role and scene had its own meaning. Well, since I roughly outlined my attitude towards "First Man", let's get to the details because these are important as hell!

Let's start with an important political envelope - the Soviets with their Sergei Korolov massacre Americans and their ace - Von Braun. They count for success and failures, but they are relatively small compared to those made in USS. They were so confident that Nikita Hruszczov sometimes humiliated the President in the international arena - once he gave his daughter the puppy Striełka (one of the Moscow dresses that safely returned from space). Rocket explosions, people and animals burned alive by short circuits and other accidents, thousands of billions of dollars (counting at today's rate adding up the amounts of both powers) spent on the development of space flights, the misfortunes of widowed women and orphaned children. As you can see, NASA was pressed by both politicians and public opinion. The result was many defects, mishaps, etc. The rockets were created on a regular basis and astronauts often got a ship that barely came off the tape and was not 100% polished. Not a very nice prospect, especially being on the tip of a bomb filled with very rare, high octane fuel. People of all times struggled with this.

The Russians had a larger Cossack on their side + they did not have a problem with political correctness (Von Braun at the beginning was uphill because it was impossible for Americans to think that the Nazi scientist would rank successes in the US as 1). Korolov modeled on the worse, more damaged V2 rockets (unlike his rival who created them), he also had a much worse beginning, because they pulled him straight from the Gulag and despite enormous technological and financial shortages, he made up these differences with his turbo-brain. As my father, a graduate of AGH (one of the best Polish studies for mathematics, engineers, etc.) said to whom I can at most envy the grades in the index - "If they gave the Soviets a has from Apollo, Gemini programs, they would try to fly to Mars one way". It is worth remembering because Russia can surprise, as many leaders have already seen, smashing their teeth at the Kremlin.

In the face of this situation, the Americans throw an ace - President Kennedy declares his success like an over-confident boxer. It's more or less like Trump now says, "Okay, we'll send the crew to Venus in eight years. We slam live-stream and the US, in general, will kick your ass again." Specialists in those days grabbed their heads and shouted "what the fuck is this man?!?!". As history has shown - Kennedy, being sent off at the time, was right. It would be impossible without technology, a lot of money, sacrifices, the best of the best, people with exceptionally good genes, and various skills. Those who must have both a bit of aggression, a feeling of characteristic "hunger" (often felt by scientists, athletes, etc.), as well as calmness and nerves of steel. They must be at the same time fully physically fit and completely free from addictions and other problems that would limit them in any way. As the saying goes - "You can't whip shit."

Ryan Gosling and Corey Stoll play great self-confident, slightly arrogant (one loudly, the other more muffled) cowboys with "steel eggs". Neil is an egghead engineer who knows when he can use force, and Buzz trusts cool calculation and his own skills. As "First Man" showed us, astronauts struggle with incredible loads that require superhuman effort from them. Mental and physical in very difficult conditions ... and all at the same time! Claire Foy who plays the role of Armstrong's wife is an equally well-defined character. A tough woman who is a support for a man and at the same time a wise signpost that will not let him forget about the most important things. In one sentence - brilliantly characterized for those years Femina. From the beginning, we feel amazing chemistry between spouses, feel an authentic feeling between them. We have a lot of close face shots, which makes it easier to read emotions from them. The same was done with the scenes in the rocket or those on the moon - they were made with incredible attention to the smallest details, so as not to disturb the immersion felt by the viewer. This one is amazing and I felt like I was there with them.

Despite its blockbuster budget and unearthly themes, the film tries to keep as close as possible to mundane matters. The screenplay focuses primarily on Neil Armstrong, and more precisely - we learn the episodes of his life interspersed with observing the Apollo mission from his perspective. "First Man" only slightly touches on the topics I wrote at the beginning (space accidents, the political aspect of the race to space, the protests of hippies and other leftists) because they are only a component of the hero of this film. We observe the impact of all these events on the first man on the moon. We see his moments of weakness, the problems he had to deal with before seeing the Earth from a silver globe perspective. In the end, a very good and consistent story came out. Even if some of its fragments are the fiction of filmmakers, it does not bother me at all - after all, this is not factual production, but a good cinema from the "dream factory".

When it comes to music, I liked the soundtrack more than the one from "Interstellar" or "Gravity". I didn't like all the songs, but songs like "The Landing" (and a few similar ones) by Justin Hurwitz built an extraordinary envelope for these epic events. I shed a tear from emotion a few times, and I think the scenes on the moon are a masterpiece. It is also worth mentioning the amazing sound - all the sounds made by metal, the effect of sudden accelerations, etc. - great work with an extremely realistic end result.