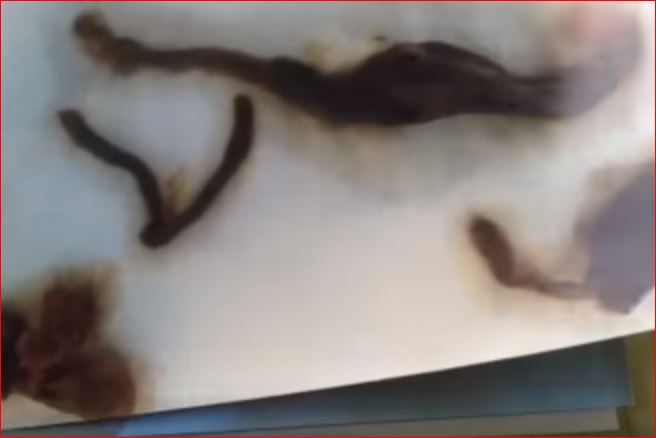 Most of you now know that Vaccines have very toxic and even poisonous ingredients in them that do cause Autoimmune Diseases, Cancers and Brain Damage but now a youtuber who doen't go on very often to post, has come out to say that there are Parasites in Vaccines?

If you are into conspiracies ( most conspiracies have now been proven to be true ), you must know that the plans of the pedophile families that included the Queen of England, the Vatican, the City of London within London, the United Nations and NATO want most of us dead...YES, Depopulation is the name of the Game.

The rich and elites believe that they do not need that many people on this planet and they want to roam free on all their millions of acres of green land without interruption from us little people.

These baby eating ( literally ) pedophile elite families the kill, and rape children and babies want to 'limit' the amount of people. In order to do that they have concocted many ways to cut our numbers down.

First of all cell phone, devices like Amazon Alexa, Echo, Google Home, the devices that vacuum your floors, the device that watch you pets while you are away, most of these have speakers plus cameras to WATCH/SPY on each and everyone of you. Same goes for your lap tops and computer screens, these criminal mafia families and their puppets like Obummer, Killary George Soros, and Justin Trudeau can watch and hear your every move and when necessary hunt you down using your own devices. Don't forget about the ever so popular microchips implanted under your skin of you hand, these will easily track you no matter where you are and when necessary, mess with your body to make you sick or control you electronically.

All I can suggest if that every parent should video record and also write down how their child was before and after their vaccines as some diseases like Seizures, and fainting happen right away and other may happen a month or two after their vaccines depending on how fast your child detoxes the deadly mercury vaccine preservatives out of their body. Toxic mercury which leeches from silver amalgam dental fillings also attaches itself to the brain, muscles and soft tissues of a victim causing continuous damage like Autism, ADD, ADHD and SIDS.

You can use your recorded information to apply for compensation paid by the TAX Payer NOT the Vaccine Manufacturers when you or your child gets injured, damaged or die from a vaccine. Just report the injury to VAERS, the Vaccine Adverse Effect Reporting System https://vaers.hhs.gov/

But remember that there are so many parents now reporting that their child has been damaged by Vaccines that the Vaccine Courts are trying their best NOT to pay out.

So now the video below shows a woman who says their Parasites have also been added to Vaccines and guess what? I'm not surprised at all.

The plan is to use vaccines to make us sick and sell us prescription drugs for LIFE. The profits made from killing our kids from the womb to the grave. How are they doing this? The have instructed most mainstream media to keep pumping our new and advertisements for vaccines, for example the deadly Gardasil for girls and now boys are show very often on youtube. Plus the criminal World Health Organization, the RED Cross, and the United Nations are pushing scare tactics like MEASLES OUTBREAKS on every social media platform to scare parents and teenages alike to run for that life saving vaccine.

Ask any older person with a thinking brain what they did when they cause a mild case of the MEASLES?
Why they'd tell you to stay home so you won't be spreading this disease. You would rest in your bed, get plenty of sleep while your body fights off the infection, drink plenty of water and fluids like soups, eat nutritional organic whole feeds and most importantly take tons of VITAMIN A that will fight the MEASLES.
So you see to me it's no difference between having the Flu and Measles. Most elder die from complications from the Measles and the Flu because they were not taken care of correctly, most die at the hands of their doctors and nurses within the cold, drug promoting hospitals.

WATCH THE VIDEO BELOW and decide on your own whether those who own the drug companies and banks are evil enough to add parasite to vaccines to make you more sick so that they could sell you more expensive toxic prescription drugs that slowly kill.