Viscri and Sighișoara, a different side of Transylvania 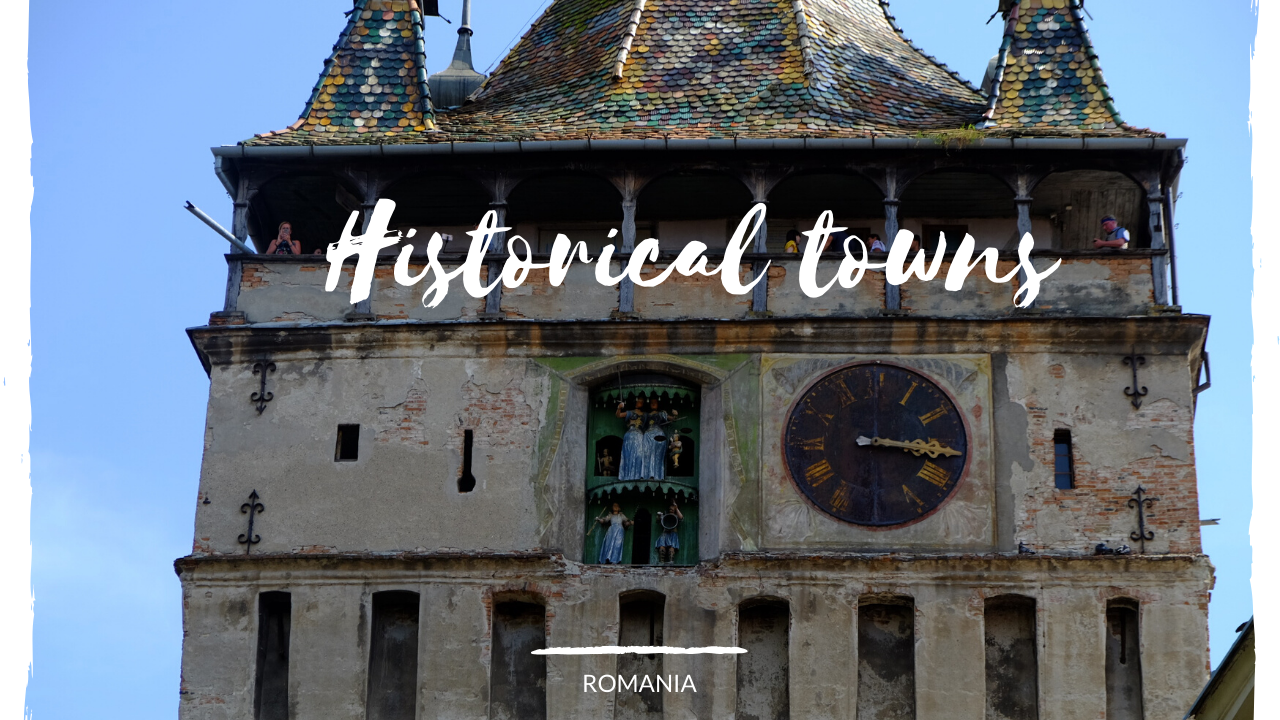 There was this one thing we had noticed in Romania and in the region of Transylvania especially. It seemed every road was undergoing repair, whether it be in small villages or on main roads. Sometimes, the journey was so tedious that horse-driven carts were much faster and more efficient than our rental car. We could tell, since we had actually been overtaken by a horse-driven cart once or twice.

That’s why we weren’t surprised when we arrived in the remote village of Viscri, located halfway between the cities of Brașov and Sighișoara, and were greeted with a road deviation. Of course, this was Transylvania after all, so we followed a sign leading to a parking lot, parked and then followed a different sign altogether, leading this time to the fortified church we had come to see above all else.

Fortified churches were a common occurrence in this part of Romania and we had already visited a handful of them but Viscri promised to be one of the most well-preserved and authentic of all so we eagerly followed the pathway that had been designed to get to it. It was an uneven path winding through the woods but the walk was very pleasant and we got a chance to peek into the backyards of traditional houses, where horses and sheep were grazing peacefully. Life seemed slow-paced in Viscri.

It took us less than ten minutes to get from the parking lot to the church and in the process, we had to cross through the backyard of an actual house where locals were actively working on some wood-cutting. There was a minute of awkwardness when we realized we were somehow trespassing but the pathway had been designed that way and they looked like they couldn’t care less until one of them said hello and the ice was broken. Viscri was a touristy place for sure but the fact they hadn’t turned this place into a tourist shop yet spoke volumes. This was a living village, not a tourist circus.

We didn’t linger though and kept walking until we got to the entrance of the church. Standing atop a small hill, it was everything we had expected it to be, although seeing this fortress rise out of nowhere was still a bit uncanny. Fortified churches were churches first and foremost but they easily could have been mistaken with your average European medieval fortress, with their thick defence walls and high towers keeping watch over the area.

Most Romanian fortified churches had been built by the Saxons, who had colonized the area in the late 12th century, and had begun building fortifications and defensive buildings, which was a matter of life and death in a land so prone to foreign invasions. Viscri was no exception and was believed to have been built throughout the 13th to the 16th century. Said to be one of the most impressive of its kind, it gave its name to the settlement, which was also given the Latin title of Alba Ecclesia, meaning White Church.

This white church was particularly remarkable indeed. Unlike many of the churches we had visited so far, it was remote from the main village and was standing all alone, surrounded by greenery, although its peaceful location didn’t undermine its commanding nature. The pristine white walls enveloping the fortress seemed impenetrable and the wooden towers were perfect vantage points to use as protection. Yet, the time of blood-thirsty foreign invaders belonged in the past and the only foreigner intruders now were tourists with pockets full of coins and cameras ready to shoot every angle.

So here we were, pushing the doors to the fortress open and greeted by an amicable guard who let us discover the place, in exchange for a small contribution of 4 lei. We first walked in circle around the church and visited the exhibitions located in the former defense walls, which now showcased traditional items such as outfits, pottery and agricultural tools.

We then proceeded to the humble-looking inside of the church and eventually climbed some narrow stairs all the way to the top of the fortification’s towers, where we were able to enjoy a commanding view over the church itself and over the surrounding countryside.

Unlike what we had seen of Transylvania so far, Viscri’s landscape was rather flat. There were no Carpathian Mountains in sight, only meadows, small thatched-roof houses and backyards full of haystack, but there was something deeply pastoral and soothing about this landscape. It was no wonder why the village was popular for being a rural retreat, so popular in fact that Prince Charles had even acquired a house there! As we found out later, Viscri was also part of a community project keen on reviving ancient traditions and crafts.

As we left the village, we knew that we hadn’t discovered an off the beaten path gem, only privy to us. Viscri was on every guide book, no questions asked, but its laid-back lifestyle and beautiful church had showed us a side of Transylvania that had definitely won us over.

Sighișoara, our next stop, was no hidden gem either. In fact, it was commonly referred to as the Pearl of Transylvania and that nickname alone rang pretty ominously in our ears, like a cheap marketing device to get the tourists coming. There was nothing we could say though as it had obviously worked wonders on us. Proof was, we were about to spend the night there.

Our first impression left us with mixed feelings. Indeed, the first thing we saw in the city was a never-ending line of cars parked at the bottom of the citadel and our first memory in Sighișoara was trying to figure out how to pay our parking ticket. Luckily, it got better in no time. All it took was to climb a flight of stairs to get to the citadel.

There were no cars allowed within the citadel, making it a pedestrian dream come true. Truth be told, the walled old-town was a dream come true, plain and simple. Something about its well-preserved medieval architecture, alluring old clock tower, cobbled streets and colorful old Saxon buildings made it look like a real-life fairy tale town and we wouldn’t have been surprised if Snow-White or Hansel and Gretel had suddenly come out of a door.

The citadel was made of two parts and we wandered around the lower part for a while, soaking in the legends of the place and in particular that of a certain Vlad Dracul, who was supposedly born in a house near the city’s clock tower. We then discovered a wooden staircase known as the Scholars’ Stairs, leading to a church atop a hill.

But the magic of Sighișoara was even greater at night, once the half-moon was high in the sky, reflecting its dim light on the city’s old streets, now devoid of tourists. Or maybe was its magic greater at dawn, when the vantage point on top of the iconic clock tower allowed enjoying a sweeping view on a partially awoken city. Be it at dawn or dusk, the evocative atmosphere and sheer beauty of Sighișoara’s citadel redeemed our first impression entirely.

Transylvania definitely wasn't short on beautiful medieval towns, peaceful landscape and authentic villages. It wasn't short on fine surprises either and Viscri and Sighișoara showed us just that.

Absolutely amazing post on Transylvania, good job guys :) I wonder what my favorite Romanian Steemian @gabrielatravels would think about that hehe :)

Let me get you some extra support for this post ;)

Wow! What a cool post! I've been to Sighișoara when I was a kid, but I didn't reach Viscri yet. Is on my list though :D
I actually live pretty close to this place as I've recently moved to the heart of Transylvania, Sibiu! So if you have any change to reach Sibiu as well, I totally recommend it. It's just the heart of this part of the world and you will be amazed by all the historical monuments and landsapes. :)

Thanks for pointing this post on my way @phortun. It's always a pleasure to read stories from people who are visiting Romania :D

Thanks for your comment @gabrielatravels. It’s an honor to be endorsed by someone from Romania. :)
We’ve actually been to Sibiu right after we visited Sighişoara and it was an amazing discovery! We felt it was one of the most beautiful cities in Transylvania so you must be thrilled to have moved there! Even though we’ve only scratched its surface, we’re actually planning on posting about Sibiu in the upcoming weeks so do not hesitate to check it out then. 😊

That's awesome and I'm happy you visited it! I'm curious to see what you visited around :D

Thanks a lot for your great comment @porthun and for sharing this post! We appreciate the support. :)

Thank you very much for sharing your beautiful photos.

Thank you for your kind comment!
Yeah, Vlad Tepes, who inspired Bram Stoker into writing Dracula was supposedly born in Sighişoara so this bust was kinda hard to miss. ^^

We are continuously working on improving TravelFeed, recently we introduced post scheduling, automated rewards claiming and EasyLogIn for all.

Hiya, @choogirl here, just swinging by to let you know that this post made into our Top 3 in [Daily Travel Digest #675]().