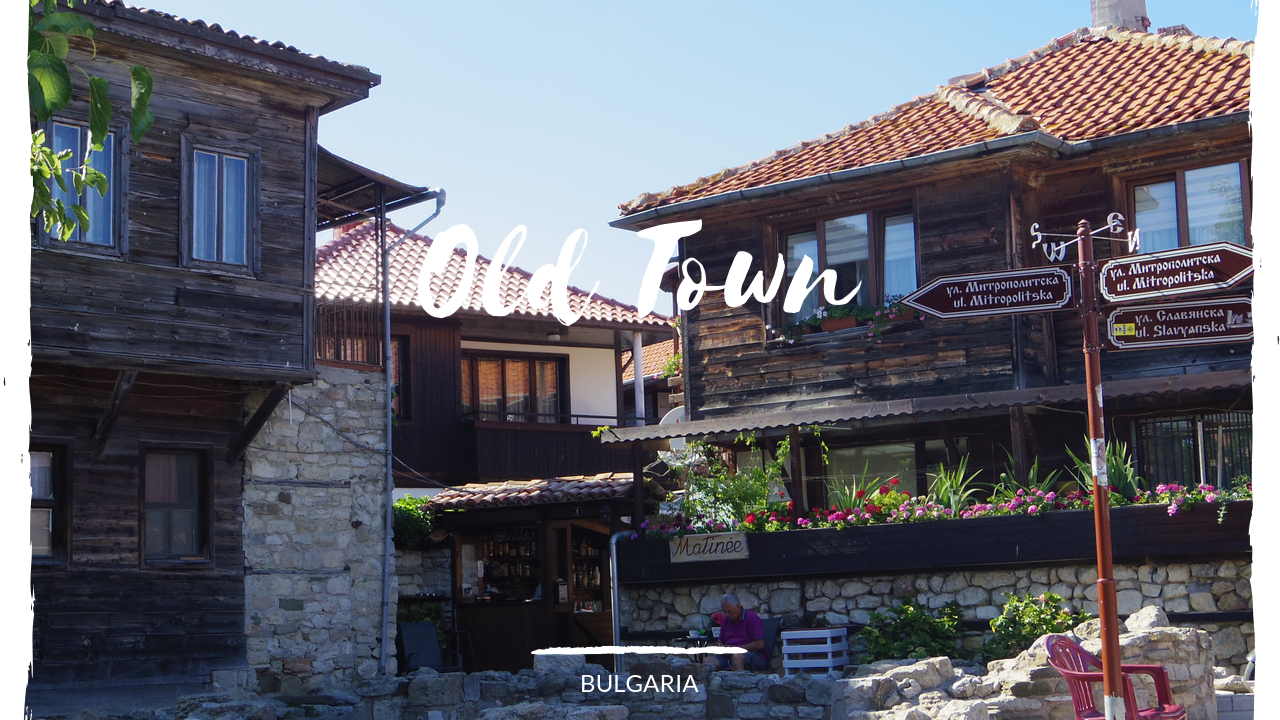 At first, Nessebar wasn’t what I expected it to be. I had read many engaging things about this seaside resort along the coast of the Bulgarian Black Sea. It was supposedly very touristy but Nessebar was one of the most ancient cities in all of Bulgaria and its city centre had been listed as a World Heritage Site by the Unesco. Plus, the beach was allegedly one of Bulgaria’s finest.

That’s why it took some imagination when I arrived in a city covered in concrete, grey buildings and left my luggage in a hotel that could have been trendy in the late 80s but was now too corny for its own good. I had nothing against George Michael’s “Careless Whisper” per se but hearing it played time and time again at the front desk made me feel like I had been caught in a time loop.

The sea was nowhere to be seen either, until I entered my room and embraced the view from the terrace. There it was finally, the Black Sea, although the ruins of the ancient city I had come to expect were still out of the picture and for good reason, since I’d have to go all the way cross the new town to finally discover the ancient part of Nessebar.

All set for some exploration the next morning, my friends and I decided to stop at the beach first to enjoy the natural scenery and get a good swim. It was fair to say we failed. The beach was overcrowded when we arrived, to the point that actually getting a glimpse of the sea was a feat as the only thing we saw was an ocean of beach umbrellas. We tried to take a sip at a beach bar but the waitress told us it was fully booked, even though all seats were empty. We then tried to grab a spot on the sands, for a price, but sharing one towel for three was more annoying than enjoyable in the long-run. An hour later, we were back to square one, listening to some crappy, royalty free music by the pool.

Nessebar had to be more than an overcrowded beach and resort hotels straight from a gloomy past. I had to believe it was and my only reason for hope was the city’s old town. Some wishful thinking and a twenty-minute walk later, a ray of hope appeared. The “Pearl of the Black Sea”, even seen from a distance, looked promising enough to warrant such a nickname.

What used to be an island entirely separated from the mainland was now a peninsula which could be reached through a man-made isthmus, making it easily accessible for cars and pedestrians alike. Luckily, there were no cars within the old town and strolling through the town’s narrow streets seemed like the way to go.

The first building we came across was a small archaeological museum dedicated to the rich history of Nessebar, from the Antiquity to the Middle Ages and then the Ottoman rule. The city began as a tiny Thracian settlement and then became a Greek colony under the leadership of Athens. Later on, it became part of the Eastern Roman Empire, was fought over by the Byzantines, the Bulgarian Khans and the Ottomans, until it united with the Principality of Bulgaria during the late 19th century.

The museum displayed several items spanning hundreds of years, from ancient coins to remarkable medieval icons, and seemed like the perfect introduction to the city. It was also the right place to purchase a joint ticket encompassing entrances to all heritage sites on the island, mostly ancient churches. The lady at the museum’s front desk had given us a complimentary map featuring all sites of interest and told us we could visit them all in the span of a whole afternoon so we took her word for it.

Visiting every single site in Nessebar’s old town in a few hours sounded hardly possible. That was until it took us literally five minutes to get from the archaeological museum to the first monument on our list, the Church of St Stephen. With its small frame and its red bricks, the church looked plain from the outside.

Yet, it hid its treasures behind its walls as the inside of the holy place was covered in beautifully-preserved, elaborate frescoes. Even though the streets of the city were busy with tourists, we were only a handful within the church. The wine leaves running down in the courtyard, the peacefulness of its interior, all concurred to create an enduring feeling of serenity.

Our next stops, the Church of Christ Pantocrator and the Church of St John the Baptist, felt the same way. It seemed that only a few tourists were actually touring all the town’s heritage sites and every time we stepped inside a church or a museum, we felt like we were the chosen ones, except when a group of Russian or local tourists had been leading the way, which happened once or twice.

Nessebar was said to be the city with the highest number of churches per capita and it wasn’t just a saying, as we seemed to spot a new church at every corner. All these churches were definitely a sight to see though. Built during the Byzantine era for the most part, some had been erected under the rule of the Ottoman Empire, as a testimony to the steady faith of the city’s population throughout the years.  They were small in scale and the ones that were not partly in ruins were humble-looking, far removed from the massive Orthodox Cathedrals we had seen in Bulgaria’s capital city.

However, each one of them had a distinct appeal, whether their architecture was slightly different or the exhibition within their walls was telling a different side of the city’s story. Like an open book, they also illustrated the development of Christian architecture over the centuries, from the early Byzantine basilicas to medieval cross-domed churches.

The magic of Nessebar didn’t only lie in its rich cultural heritage though. Mostly, it lied in its atmosphere. This was why many tourists weren’t going on a church spree but were rather wandering aimlessly within the city’s narrow streets, admiring the wooden balconies of the houses built in Bulgarian revival style, eating some ice cream on a bench overlooking the sea or next to the ruins of the 6th-century Church of St Sophia.

In my case, it was both the architecture and the laid-back mood that got to me. It was sipping a glass of fresh lemonade under the sunshine and then pushing the creaky doors of a 13th-century church. It was running away from crushing waves by the sea sidewalk and then visiting an ethnography museum whose keeper had gone on a break and wasn’t planning on reopening that soon since every tourist was passing by the building without blinking.

As time went by, we expected the crowds to get thinner but the hustle and bustle didn’t take it down a notch and the city seemed even livelier in the evening as it was during the day.

We enjoyed a nice seafood dinner with a view on the sea, took some last pictures of the ruins at sundown and then went back in time to our old-fashioned hotel. Yet, it didn’t matter much anymore as Nessebar had eventually delivered on its promise.

I would have ran a mile away from that over crowded beach, but the rest of the town and architecture looks magnificent, exactly my type of holiday

That’s the spirit! ^^
The beach was far from memorable, especially in peak summer season, but the old town definitely redeemed it. :)
Thanks for your comment and your support.

Hiya, @LivingUKTaiwan here, just swinging by to let you know that this post made into our Honorable Mentions in Daily Travel Digest #649.