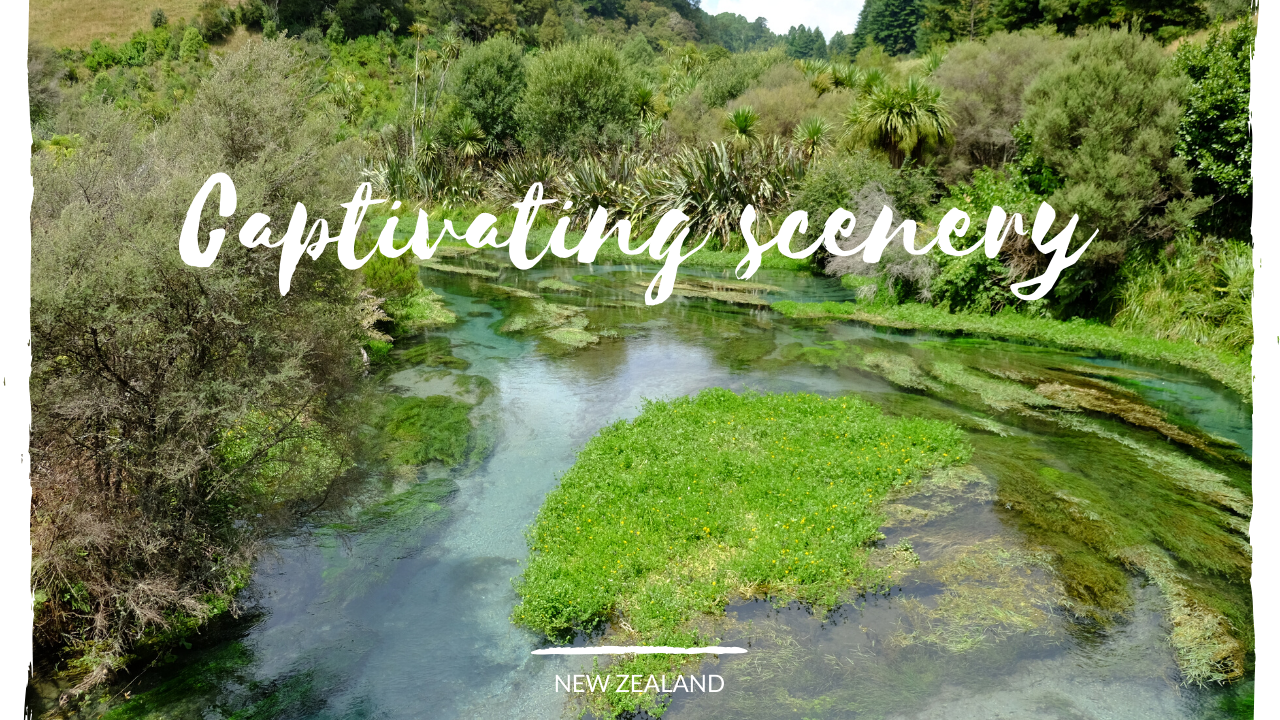 There was much worse a place to spend the night, we thought while casting a circular look at our surroundings. We had left Wellington in the morning and had been driving for hours on end until sun had started declining, forcing us to find a place to crash for the night. Since we had arrived in New Zealand, we had slept in our rental car in various parts of the country, from the outskirts of an industrial area in Auckland to a rest area in the middle of the countryside, where our only company had been angry chicken, only too eager to chase after our car.

Yet, none of the places where we had spent the night so far was as magnificent as this one. There was not a soul in the area, not a sound either. Sun was going down on the distant snow-capped mountains of Tongariro National Park. We were familiar with Tongariro, as we had hiked through the park a couple days beforehand, striving to catch the best glimpse of Mount Ngauruhoe, the mountain that had inspired the teams of the Lord of the Rings movies to bring to the screen Mordor’s Mount Doom. But at this very moment, the dim lights cast on the rugged backdrop that obstructed the horizon and our utter loneliness gave us an unmatched feeling of raw beauty.

An even better surprise awaited us as we caught sight of the tip of Mount Ngauruhoe emerging faintly from the clouds, bathed in the dark shades of the early evening lights, when day hadn't yet given way to pitch-black night. As chilly as our night would prove to be, spent shivering in our car for the lack of proper blankets, this was the best reward we could have ever hoped for. Little did we know then that we’d be even more awe-struck a day later.

We reluctantly drove past the ghostly sight of the mountain that had stirred up our imagination and kept driving towards our next destination, which had once again been prompted by our love for all things Lord of the Rings. That was nothing original here, we were well aware. To our defense, New Zealand seemed to have played this card masterfully, so much so that we had been greeted by giant statues of Middle-earth dwarves at the very airport of Auckland. Tourism had soared and hadn’t withered since the screening of the Fellowship of the Ring and the Hobbit trilogy had kept the trend alive. This was soft power at its best.

The truth was, we had decided on our next stop through flipping the pages of a book dedicated to the original filming locations of both movie trilogies. Had we read that book more thoroughly, we’d have known that this place hadn’t actually been used in any of the movies. In the end, we were glad to have been so carefree as the Te Waihou Walkway, film location or not, was so stunning that it instantly became one of the highlights of our trip.

Cars were parked on all sides when we got to the entrance of the walkway and it was long until we finally found a spot, closely followed by another row of cars. The place seemed to be a local’s favorite as we could spot a lot of families hanging around, preparing for a sunny picnic day. Some people were also carrying empty water bottles, all set for a refill, for we learned later that the waters of this Blue Spring were some of the purest in the whole country.

As we walked closer to the stream, we quickly realized that none of the pictures we had seen so far on paper glass gave proper justice to the surreal magic of Te Waihou. It looked as if an artist had just dipped the tip of their painting brush in the waters, creating a perfectly balanced harmony of turquoise blue and lime green.

The crystal clear waters were one thing to be astonished by but the vibrant grasses undulating rhythmically and the native rimu trees surrounding the pathway truly elevated the scenery, making it a feast for the eyes. The further we walked, the wildest the stream looked and the thinnest the crowds became, although we could still see people swim in the spring, entirely undeterred by the fact that swimming was frowned upon by local authorities.

The Blue Spring was indeed a place with little, if no equivalent. It was considered a national taonga (treasure) and a unique natural phenomenon formed over hundreds of thousands of years that was in dire need of protection. Months after our visit there, we learned that local authorities had reinforced their surveillance in order to safe keep the purity of the waters at all costs and we could only support the initiative as the Te Waihou springs had left a tremendous impression on us.

New Zealand had no shortage of natural beauties so epic that, at times, they looked as if they had sprung up from the imagination of a prodigious mind. It was certainly no wonder why so many directors had flocked the country to give life to their wildest movie dreams and inspired many movie-goers into embracing those dreams. The best part was that we had only roamed the roads of the country’s northern island and even then, there was still plenty left to discover. As soon as opportunity would arise, we wouldn’t be able to resist the call for a second visit.

Wow...so you planned your visit, by the places that were filmed for the LOTR and Hobbit series of movies!! ... that mount and water body is special. So,cool that you go to the remotest regions and spend your while there!! ...

Thanks for your comment!
Haha yes we did! We’re both big fans of the LOTR trilogy so that’s a major reason why we wanted to go to New Zealand in the first place. ^^ Of course we found out amazing places throughout our trip that had nothing to do with the movies but we gotta say that our visits to the filming locations were particularly emotional moments for us. :)
We posted a blog about LOTR’s filming locations a while ago by the way so feel free to check it out if you’re interested: https://goldvoice.club/steem/@haydae/4-lord-of-the-rings-locations-on-new-zealand-s-north-island

Absolutely stunning landscapes :) I am currently in the Azores that are sometimes dubbed "European Zealand" and I can really see some similarities :)

Thanks for sharing!
I had no idea that the Azores were compared to New Zealand but I’ve just taken a look at the article you posted and I totally get it now. ^^ This place looks amazing indeed, so green and wild! And your shots definitely did the landscape justice. :)

Thank you :) Like I mentioned in the post though, I have only seen a tiny fraction of the island so far. There are beautiful lakes, mountains, waterfalls etc. which really makes the landscape similar to that legendary landscape of New Zealand ;)

Well I guess you still have a lot of great exploring to do then. 😊

The crystal clear waters were one thing to be astonished by but the vibrant grasses undulating rhythmically and the native rimu trees surrounding the pathway truly elevated the scenery, making it a feast for the eyes.

my favorite picture is the second last one. It looks and sounds like an amazing trip. I have not traveled much and I do like browsing these type of posts

Thanks for your sweet comment!
I’m glad this post made you travel to New Zealand, even if just for a little while. 😉

Hiya, @LivingUKTaiwan here, just swinging by to let you know that this post made into our Honorable Mentions in Daily Travel Digest #688.

I'm lucky to live about an hour's drive from Te Waihou (Blue Springs). It really is magical. I often walk in from the longer side - there's some great spots.

Wow, that must be great to live so close by! It’s no wonder you go there often!
We didn’t have time to do the full walk when we visited unfortunately but I definitely trust you when you say there are some amazing spots. 🙂