A post lock down trip to the cliffs of Etretat 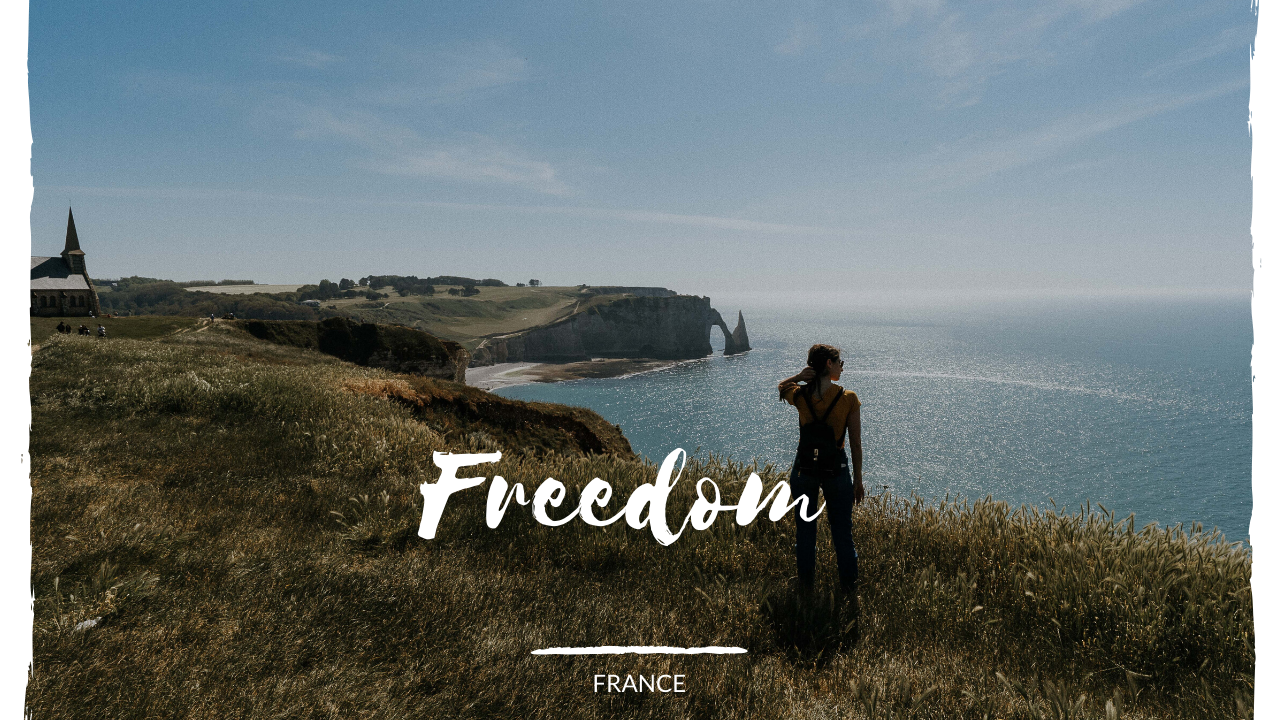 Finally, the lock down in France had been lifted. The days of needing a travel authorization to go out for five minutes to buy some bread were over, at long last. Life was getting back on track, except it was now a life with surgical masks on and social distancing policies. Save for the masks, our routine hadn’t really changed in the days that had followed the end of the lock down but three weeks had passed since then and we were craving some fresh air. Plus, sunny days were a luxury in the region of Normandy and it was high time we made the most of them before they made room for the usual rain and cloudy skies.

A trip to the seaside sounded like the perfect idea and we therefore hit the road towards the coastal town of Etretat, whose legendary cliffs had been celebrated by impressionist painters, musicians and writers, including Maurice Leblanc and his infamous gentleman thief Arsène Lupin, whose adventures had led him to the cliffs in the novel called “The Hollow Needle”. The real rocky formation called the Needle or l’Aiguille in French was of course far from hollow and it didn’t shelter the treasure of the French royalty either but its unusual shape was a sight to see either way.

We had chosen to travel to Etretat on a week day to beat the crowds as best as possible. The country roads along the way were rather empty and so were the streets at the entrance of the town, leading us to believe that we had made the right decision. With our car easily parked in a quiet street, we started following a steep path going up to the Chapel of Notre-Dame-de-la-Garde. The path winded in between affluent mansions covered in moss and flowery back yards with a million dollar view on the cliffs down below. Surprisingly, these houses hadn’t yet been turned into cosy guest houses or pricey hotels, although their bushes and fences weren’t high enough to protect them from the scrutiny of hundreds of daily tourists and their cameras.

The path then got steeper as we approached the Jardins d’Etretat, which we purposefully avoided after taking a quick glance in between the groves that surrounded the propriety. It seemed the gardens were keen on mixing modern art sculptures and landscape design, which sounded rather promising until we saw the sculptures themselves and particularly a set of giant baby heads scattered in the gardens, which leaned heavily on the creepy side. The gardens were soon forgotten as we reached the side of the chapel though.

According to the legend, sailors had carried on their backs the stones and wood that would help build the chapel, which had been blessed in 1856. The building itself was quite plain and humble-looking, on top of being closed for the time being. However, the real magic didn’t lie in the architecture on the chapel but in its location. Perched atop a chalk cliff, the chapel stood isolated from the rest of the town. Apart from a decrepit building a few meters away standing near a field of grazing cows and a handful of benches, there was nothing man-made here, only the raw beauty of white chalk cliffs covered in wild flowers, hanging above the immensity of the sea. And the sea, to our surprise, was as clear and inviting as some of the beaches we had seen in southern Europe, as opposed to their usual stern and gray waters.

Following a pathway along the cliffs, we enjoyed a path less traveled and so did the handful of sunbathers down below, who had definitely made the right call in walking away from the main section of the beach. Enjoying one last commanding view over the Needle and the arch known as the Porte d’Aval, we then walked down the hill and started approaching the arch from below, through a busy sea promenade. The beach itself was almost as busy with families and groups of friends overcoming the obvious discomfort of lying down on pebbles just to feel the sun of their skin. Some brave souls were even swimming in the Channel.

Brave we were not so much though and walking on pebbles collapsing under our feet was enough of an adventure for our tastes, not to mention the slippery stones covered in wet seaweed, or maybe was it boiled spinach by the looks of it, we had to cross to get as close as possible to the arch. From above, the Porte d’Aval looked like the head of an elephant dipping its trunk into the sea. The novelist Guy de Maupassant was said to have coined this comparison first. Sadly though, the story wasn’t accurate as he apparently meant to describe the Porte d’Amont, located on the other side, below the chapel. To us, the Porte d’Amont was more akin to a mammoth, with its brown bumpy back and massive paws floating on water.

Elephant, mammoth or mere chalk cliffs, the scenery in Etretat had the power to ignite the imagination. It was no wonder why so many painters had come to try and replicate its magic on canvas, why so many writers had come to find inspiration. There was a special spark in Etretat.  On that day, that spark had worked its magic again and brought so many people together on a week day to leave the lock down behind simply to enjoy the beauty of nature, a lazy afternoon on the beach under the sun or the reassuring habit of slurping ice cream on a terrace. Simply put, Etretat was the perfect spot to embrace freedom again.