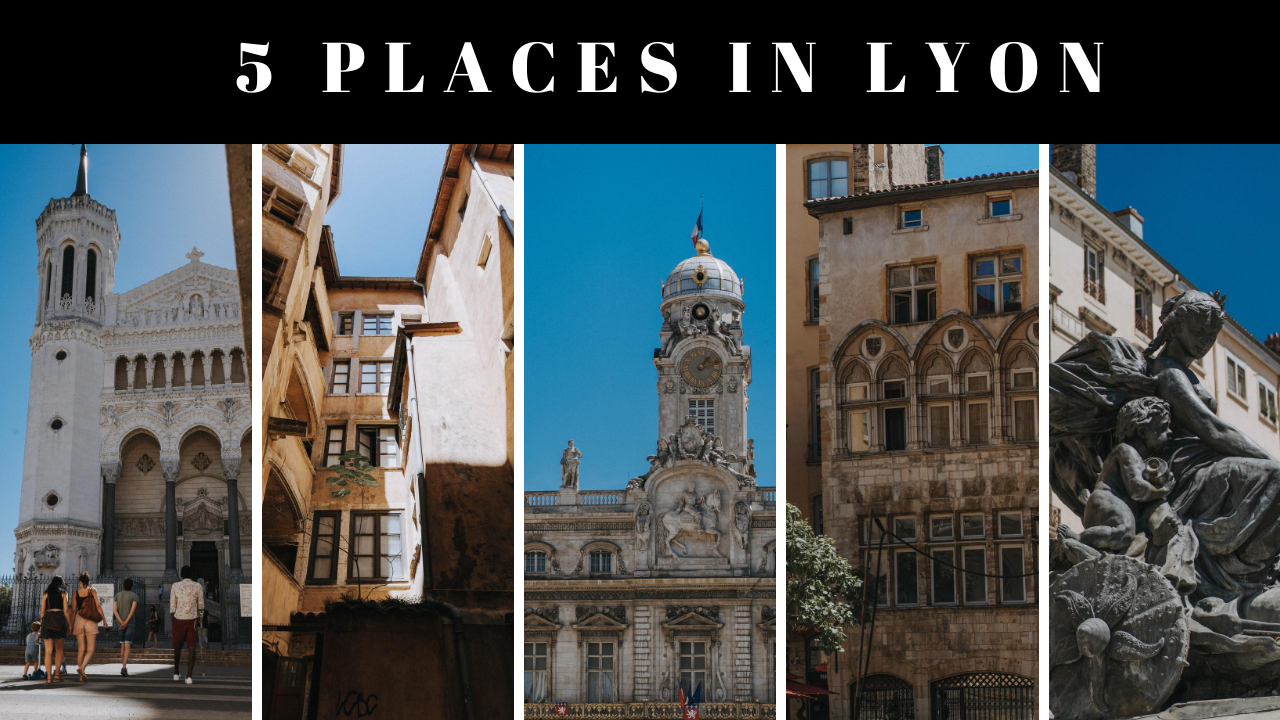 Lyon is not the kind of city that makes headlines frequently, apart for its football team
perhaps. The third-largest city in France has been long overshadowed by Paris
but also by other popular French cities such as Marseille or even Strasbourg. Yet,
in recent years, word seems to have got out that Lyon had some major aces up
its sleeves and it is only natural, as one of the country’s oldest city and
France’s culinary capital could not go overlooked for much longer.

Lugdunum, as per its Roman name, was founded by Roman in 43BC. What started as a
settlement for war refugees soon developed into a full-fledged city of major
historical significance. Two future Roman Empires were born in the city,
Claudius and Caracalla, while Lyon gradually became a spiritual centre known
for its early Christian martyrs. The city would then become the capital of the
Kingdom of the Burgundians and later part of the Holy Roman Empire before it
reintegrated the Kingdom of France in the 14th century. The Renaissance would see Lyon reach unprecedented wealth through the silk trade
and its close ties to Italy would give the city an Italian flair, still visible
in the district of the Old Lyon. Later centuries would not be so kind. Mass violence
sprung from the 16th-century wars of religion and the city was
besieged by partisans of the French Revolution, who went as far as declaring
that Lyon no longer existed, while Lyon became a centre of occupying Nazi
forces during WW2.

Such a rich and convoluted history explains the layout of the city, which can almost be
visited as if flipping the pages of a history book. Starting with the hill of
Fourvière and its Roman ruins, visitors can jump forward in time to discover
the Renaissance architecture of the Old Lyon and then cross a bridge on the
Saône River to be plunged in 17th-century style on the Presqu’île
peninsula. The Croix Rousse district and its silk workshops allows for a trip
back to the 18th and the 19th centuries. Yet, Lyon has not stood idly for centuries and the modern architectural projects of Confluence, the creative painted walls throughout the city or the remodeled banks of the Rhône River confirm its vitality. So if you’re willing to take a trip back to history while making the most of a great city break, let’s take a look at five
of the most interesting landmarks in the city.

Located on the hill of Fourvière, the ancient theater was at the heart of the Roman
settlement of Lugdunum. Built at the beginning of the Empire and later expanded
during the 1st and 2nd centuries BC, the theater could
host as many as 10,000 visitors. It was then abandoned during centuries before
being rediscovered in the 19th-century, along with the small odeon
that forms an unusual pair with the theater, one of only two such ruins in
France along with the theater of Vienne. Historians thought for a long time
that the odeon was the place where early Christian martyrs were executed until
massive archaeological excavations revealed the nearby theater.

Nowadays, the theater is still used as a cultural venue during the festival of the Nuits
de Fourvière, the Nights of Fourvière, which takes place every summer and
features theater, music, dance and even circus performances. The ruins are also
considered to be among the best-preserved in France and shed light on the Roman
past of the city. So does the Gallo-Roman Museum which sits in a modern building
near the entrance to the theater. Despite its unattractive looks, the museum is
an informative visit that adds much needed context to the ruins and displays a
number of items recovered on-site.

Notre-Dame de Fourvière is inevitable in Lyon. Everywhere you stand, you will see its
white silhouette in the horizon. Yet, even if it dominates the city’s
landscape, the Basilica is a fairly recent monument. Located on top of the hill
of Fourvière, where the Roman forum used to stand, the holy place was only
built in the 19th century. Some will say that its ostentatious and
slightly overbearing architecture is proof of that, as architects in the 1800's
were not particularly known for their love of humble looks. The Basilica even
bears to this day the nickname of the “upside-down elephants” for its supposed
resemblance with an elephant on its back, the four towers being its legs.

The architectural features of the Basilica are indeed quite unique in that its
architect, Pierre Bossan, intentionally drew from Romanesque and Byzantine
elements to create a style that sets Fourvière apart from all other churches in
town. The mosaics that cover the walls and the roofs are particularly
impressive, while it seems no single spot has been spared from decoration
within the building. The lower part of the Basilica, in comparison, looks less
grandiose but it is an interesting visit for it showcases a number of
representations of the Virgin Mary from all over the world. This exhibition
also acts as a reminder that the Basilica is dedicated to the Virgin Mary,
while Notre-Dame de Fourvière is a highlight of the annual Fête des Lumières.
This festival meant to thank Mary for saving the city from epidemics has taken
place every December since 1852, although it has come a long way from lighting
the candles in the city and is now a major lights show drawing millions of
visitors.

For the longest time, few people knew that the Vieux Lyon was one of Europe’s most
extensive Renaissance districts. The Old Lyon was even set for destruction
during the 1960's as many of its historic buildings could have been replaced by
a highway. Fortunately, Minister of Culture André Malraux had his say and the
old district was the first site to be protected under the Malraux law meant to
protect France’s cultural sites. The Vieux Lyon was extensively renovated in
the years that followed and quickly became a highlight for all tourists coming
to town.

Numerous historic buildings can be found throughout the district, from the Roman
Saint-Jean Cathedral to the Gadagne Museum, spanning the history of Lyon in a former
hotel particulier, a private town house. Mostly, the Vieux Lyon is about unusual
discoveries though. The Musée Miniature et Cinéma is one such surprise, as you
probably wouldn’t expect to find the shield of Leonidas in 300 and the robot of
I-Robot in a historic Renaissance building. This private museum is indeed
dedicated to all things CGI and movie props and also displays miniature models
designed by Dan Ohlmann, the museum’s owner. In the Vieux Lyon, you can’t be
afraid of pushing doors left and right as it will lead you to the district’s
most precious gems, such as the historic Pink Tower located in a courtyard away
from the main street. The neighborhood is also known for the traboules, a type
of passageway crossing through different buildings that allows peeking into
some more historic Renaissance architecture.

The Place des Terreaux is a square located on the northern part of the Presqu’île
peninsula, in the heart of Lyon. Lesser-known than the Place Bellecour, and
much smaller too, it boasts an impressive array of architectural wonders
nonetheless. The Hôtel de Ville, Lyon’s city hall, is possibly the most
striking of them all. Its façade was designed by Jules Hardouin-Mansart, none
other than the architect responsible for the Grand Trianon of Versailles and
the Place Vendôme in Paris. The building has slightly changed since his time
however as the statue in its centre represents King Henri the 4th on
horseback, whereas the statue used to be of Louis the 14th. Les
Terreaux, as the square is known in Lyon, also boasts an impressive fountain designed
by Bartholdi. An allegory of the Garonne River, the fountain was commissioned by
the city of Bordeaux but it was eventually purchased by Lyon and the allegory became that of France and its four main rivers.

The Museum of Fine Arts is located right across the square, in a former Benedictine
convent. The museum is one of the largest art museums in France and its
collections range from Egyptian antiquities to paintings spanning six
centuries, including works of art from Veronese, Rembrandt, Bacon or Miro.
Behind the City Hall, visitors can also admire the peculiar façade of the Opera
House and its blend between old and new, as it was redesigned by architect Jean
Nouvel in the 1990's. On another note, the district around the Place des Terreaux is
also known for its numerous traditional bouchons Lyonnais, as opposed to the
many tourist traps scattered throughout the Vieux Lyon.

The hill that works, Croix-Rousse, stands opposite the hill that prays, Fourvière.
Indeed, the Croix Rousse district was at the centre of the silk industry in
Lyon for many years. The Canuts (silk workers) operated in the area and
developed their own unique culture as well as their unique architecture, as
their apartments were meant to accommodate the tall silk looms they used on the
daily. Two significant museums allow reliving the history of those silk workers.
The Maison des Canuts focuses on the living conditions of the workers,
recreating a typical apartment, while the Textile Museum spans 2000 years of
history of textiles.

Just like the Vieux Lyon, the Croix Rousse area is also known for its traboules, which
were used by silk workers to transport their material more conveniently,
sheltered from rain. During the Second World War, the traboules would be used by members of the Resistance to confuse the Nazi occupier, as they would enter in one street and
go out in another. The most famous of all traboules is located in the so-called
Cour des Voraces and was built around 1840. In recent years, the Croix-Rousse
has become more and more gentrified and it is now home to a number of cafés and
art galleries, while its inhabitants praise its village identity, remote from
the rest of the city.

A city of traditions, Lyon has long been accustomed with blending old with new and it is no mistake it has earned a reputation for being one of France's most beautiful and most livable cities.

View this post on TravelFeed for the best experience.
traveladvicephotographygempowerhousecreative

Thanks for using TravelFeed!
@smeralda (TravelFeed team)PS: Have you joined our Discord yet? This is where over 1000 members of the TravelFeed come together to chat. Join us!