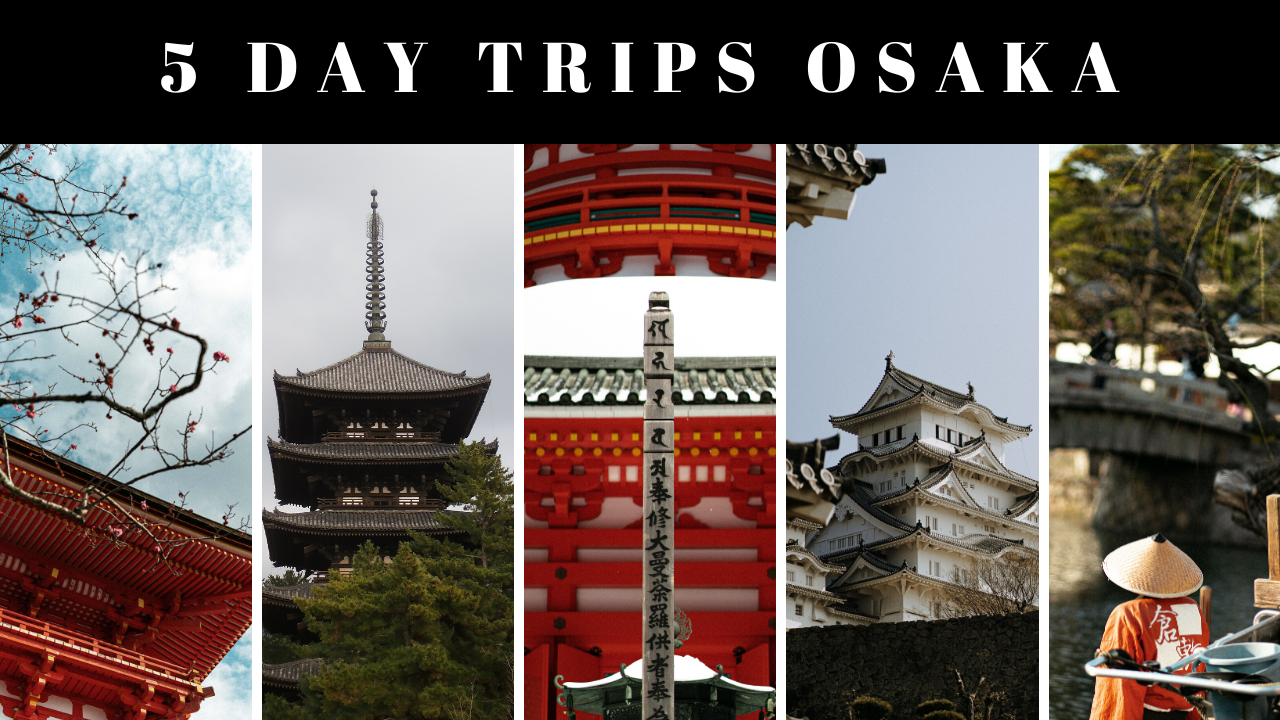 Planning a trip in Japan is no easy task. The country boasts so many unforgettable landmarks and landscapes that it would take months, if not years, to see them all. Yet, tourists usually can’t afford to wander across the country for that long and tend to focus on the essential places to visit, meaning they have to travel quite extensively to make the most of the experience. If you’re not a fan of packing and unpacking and you don’t want to check-in at a different hotel every day, rest assured that all is not lost though.

Japan’s railroad network being what it is, that is one of the most reliable and efficient networks in the world, it is quite easy to settle in one place and organize day trips to discover new places every day without carrying your heavy suitcase everywhere you go. The Kansai area is particularly appealing in that regard, for it grants an easy access to some of Japan’s most culturally significant places. Mountain temples, feudal castles, ancient trading towns, are all within a few hours' train trips.

The cities of Kyoto and Osaka are the best suited candidates to start any day trip in the region. They’re both tourist favorites, offering plenty of accommodation options and prominent cultural monuments. They both shelter major transportation hubs allowing to head in every direction. Long story short, it might be hard to choose where to stay between those two. Yet, Osaka takes the lead in our opinion. Indeed, the capital city of the Kansai area offers more direct and quicker routes to the region’s main places of interest. It is also particularly well-known for its vibrant food scene, shopping districts and nightlife, making it a bit more memorable to go back to after a full day spent delving into Japan’s ancient history and traditional culture.

If you therefore choose to spend some time in Osaka and want to explore the area further, here’s our top five picks.

Even if you don’t actually stay in the city, Kyoto remains Japan’s cultural cradle and as such, it is an essential visit. Of course, this status has granted the country’s former capital such an aura, both within Japan and abroad, that you will inevitably join a long line of tourists most places you go and particularly so during the hanami period from late March to early April, during which cherry blossoms are in full bloom. That being said, Kyoto is a city of true magic and the prospect of mass tourism shouldn’t deter you from visiting as you would be turning your back to some of Japan’s most beautiful architecture as well as an unparalleled atmosphere.

Kyoto has been celebrated by poets, artists and writers, Instagram influencers too for that matter, and it only takes a visit to the golden splendor of the Kinkaku-ji temple at dawn, a walk under the thousands of vermilion gates of the Fushimi Inari shrine at dusk or a an exploration of the back alleys of the Ninnenzaka district to understand why. Kyoto boasts incredible gardens, from the moss covered garden of Saiho-ji to the zen garden pertaining to the Ryoan-ji complex, striking architecture, from the wooden silhouette of the Kiyomizu-dera temple standing on pillars atop a cliff to the intricate décor of the Nijo castle, and entire neighborhoods that house Japan’s most well-preserved houses and mansions.

One day isn’t enough to uncover all its wonders but it certainly is to discover some of its staples and a few unexpected gems along the way. Plus, Kyoto is close enough from Osaka to return to if so desired.

How to get there: The shortest way to get to Kyoto is to ride the Limited Express Thunderbird train from the Osaka station, which takes 27 minutes to get to the ancient capital. From the station of Shin-Osaka, the Nozomi Shinkansen is even faster as it takes 14 minutes to join Kyoto but keep in mind that Shin-Osaka is further away from the city.

If you need an escape from the restlessness of Osaka, Kôya-san might be one of the best options you have as a day trip. Picture a small village perched atop a mountain, far away from any big city, and on this mountain, imagine ancient temples where pilgrims and monks join in prayer, impenetrable woods and a cemetery so old it is believed to be one of the oldest in Japan. Kôya-san is all that and a Unesco Worl Heritage site, part of the “Sacred Sites and Pilgrimage Routes in the Kii Mountain Range”.

It can take between two hours and two hours and a half to get to the site from Osaka but the journey is definitely worth it for those willing to delve into Japanese spirituality, since Kôya-san is the birthplace of the Shingon zen sect, but also for those looking for a site that combines wild nature and astounding architecture. The different temples that have been built over hundreds of years are scattered throughout the entire town but it is easy to navigate on foot from one to the other, taking only a few minutes to go from the soothing head temple of Kongo-buji to the flaming red pagoda of Dangojaran.

The furthest landmark is the Okunoin cemetery but you can either walk there or ride a bus, even though you can expect to wait for a bit for the latter. As relatively remote as it is, the Okunoin cemetery is a must-visit for its mysterious atmosphere but also for its spiritual prominence as it leads to the mausoleum of Kûkai, the Buddhist monk who founded the sect.

How to get there: Take the Nankai Koya Line for Hashimoto and change for the Nankai Koya Line towards Gokurakubashi, where the final leg of the trip will take you to Kôya-san by cable car. A quicker route also exists, which goes directly to Gokurakubashi. Your best option there is to buy a 2-day pass at the Namba station, which also allows riding any bus within Kôya-san.

Visiting Nara might depend on whether you’ve paid a visit to Kyoto yet. If you haven’t, then Nara is an absolute must-visit. If you have, it will boil down to whether you’re interested in visiting another former capital city. Whichever the case, Nara is different enough from Kyoto to warrant a visit. The city itself isn’t spectacular but a short bus ride will take you to the Nara Park, which is the location of most major monuments. Simply said, Nara is a dream come true for architecture, arts and history buffs, boasting the world’s largest wooden building and the world’s largest bronze Buddha statue, both within the temple of Tôdai-ji built in the 8th century, as well as a number of ancient shrines and ruins scattered around the park.

Most buildings predate those in Kyoto as Nara stood as the empire’s capital from 710 to 794 AC. All visually stunning, the landmarks in Nara are also particularly enjoyable to visit as they are all out in the open and concentrated within a small radius, allowing to walk from one to another. The city is also famous for its deers, which wander freely within the park and are a hit with the children, until one of the animals chases them out to steal food from them.

How to get there: You can either ride the JR Yamatoji Rapid Service from Shinimamiya and get to Nara within 36 minutes or ride the same train from Osaka, which will take 15 more minutes.

Let’s leave the Kansai region and head towards a castle whose delicate architecture and pristine white colour gave it the nickname of Shirasagi-jô, meaning the White Heron Castle. The Himeji Castle is undoubtedly a prime example of Japanese feudal architecture and it also happens to be one of the few authentic castles in the country, where most fortresses were destroyed and rebuilt over time. The construction of the complex started in 1333, when the samurai Akamatsu Norimura chose this location to build a defensive fort on top of the Himeyama hill.

As time went by, the structure was expanded upon and remodeled to become the massive fortress that now stands above the city that bears its name and remains the largest of its kind in the country. Miraculously, the castle was left unharmed by the bombings of the Second World War and by natural disasters, which serves to explain why it is the most visited castle in Japan.

Himeji doesn’t only boast a castle though and is also famous for the garden of Kôko-en, which stands next to the fortress. Although quite recent, dating back to the 1990s, the garden is a fine example of Japanese landscape design. It spans 3.5 hectares and houses nine distinct gardens as well as a tea ceremony house.

How to get there: The JR Special Rapid Service train for Aboshi will take you directly to Himeji from Osaka in about an hour while the Shinkansen Sakura or Hikari will take you there from Shin-Osaka in 40 to 30 minutes.

Okayama is a name that doesn’t carry as much weight as Kyoto or Himeji. The capital city of the Okayama region isn’t yet a top tourist landmark, except for garden lovers. Indeed, the city boasts the Kôraku-en, a garden that ranks among the three best traditional gardens in Japan. Ordered by a feudal lord, the garden was designed in the late 17th century in the Kaiyu style, meaning “scenic promenade”, but it only reached its modern form in 1863. Spanning an area of 133,000 square meters, the garden showcases different atmospheres and landscaping styles, entailing tea houses, streams, hills, bamboo woods and ponds where koi carps paint a quintessentially Japanese picture. Next to the garden stands the all-black Okayama Castle, nicknamed the Golden Crow Castle.The appeal of Okayama pretty much stops there.

However, a day trip to the city can perfectly include another trip to the town of Kurashiki, located a mere 15 minutes away. Apart from being the site of Japan’s first museum of Western fine arts, Kurashiki is well-known for the ancient merchant quarter of Bikan that boasts a high number of well-preserved 17th-century wooden warehouses stretching along a scenic canal. Kurashiki is no place to tick landmarks off a list but rather it is a place of slow-paced contemplation as well as the ideal town to travel back in time to the Edo period.

How to get there: You can reach Okayama in 45 minutes riding the Shinkansen Nozomi from Shin-Osaka and then get to Kurashiki in about 15 minutes with the JR Sanyo Line.

For those willing to take their time while discovering a different side of Japan every day, to enjoy the big city life while exploring natural and historical wonders, planning day trips from Osaka is definitely a great option.