5 Bulgarian dishes you need to try 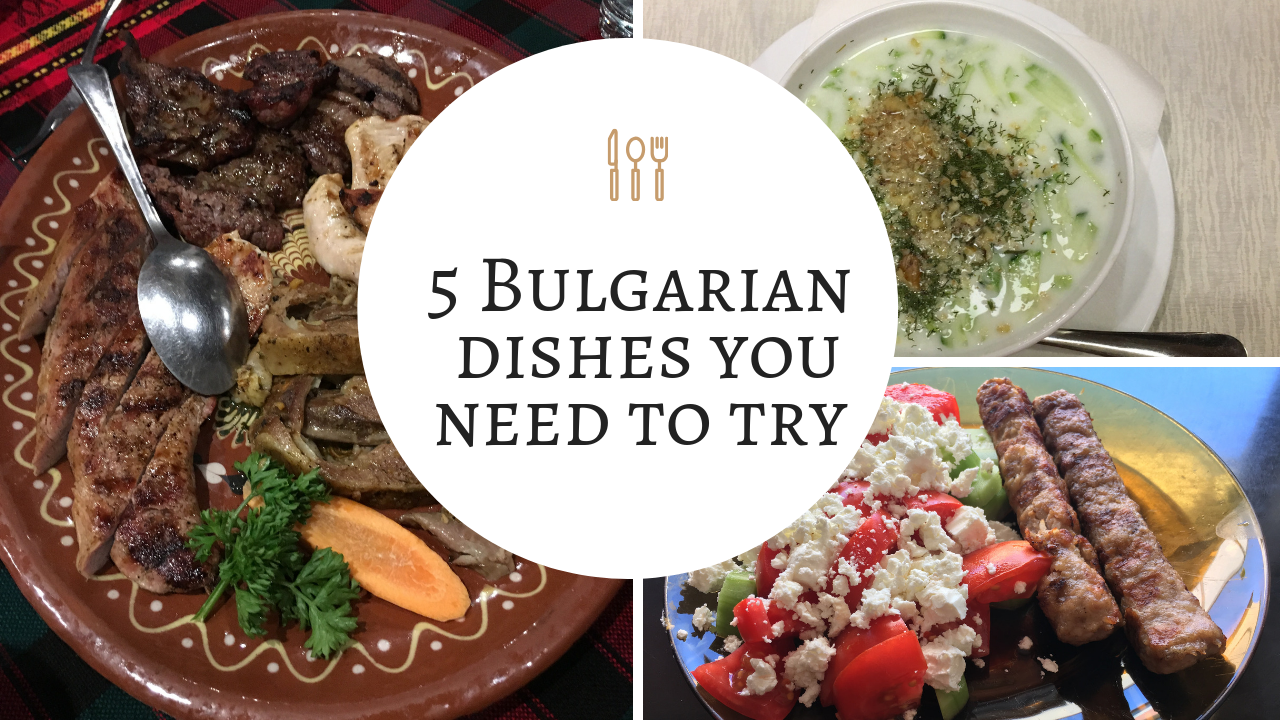 Caught between Greece and Turkey, Bulgaria isn’t a country that gets the recognition it deserves and that is also true of its cuisine. The country doesn’t boast as many iconic dishes as its neighbours, which always rank high on the list of foodie heavens, yet it took the best of both worlds to develop into a cuisine that resembles that of its neighbouring countries but with its own unique take.

Indeed, Bulgarian food id first and foremost the reflection of the country’s key geographical location, at the literal crossroads between Europe and Asia Minor. As such, it also reflects the many cultural influences that shaped Bulgaria throughout its history, dominated by the 500-year long Ottoman occupation, and it shares common roots with most countries in the Balkan region.

This multicultural legacy definitely makes for an interesting food scene, mainly based on fresh vegetables, meat and dairy. The shining star of Bulgarian cuisine has to be the infamous Bulgarian yogurt, otherwise known as bacillus bulgaricus. Yet, there are other gems to be discovered. The Shopska salad is definitely on par with the beloved Greek salad while rose-flavoured Turkish delights could well be renamed as Bulgarian delights, which would only be fit for the land of the roses.

All in all, Bulgarian food has a lot to offer so here is our five picks to try while you’re visiting the country.

The shopska salad also goes by the name of Bulgarian salad, which goes to show how important this dish is to Bulgarian food. This salad appears on every menu, from gourmet restaurants to third-rate kebab joints, and it definitely qualifies as Bulgaria’s national dish.

Its combination of ingredients is pretty simple: cucumbers, tomatoes, onions and parsley with grated white, feta-like sirene cheese on top. A variation of this dish can be found in the whole Balkan region and is of course reminiscent of the Greek salad, which predates it.

History has it that this dish was created in 1956 in the seaside resort of Druzhba as part of a campaign to promote tourism in Bulgaria, meaning that the shopska salad is a very late addition to Bulgarian cuisine. Yet, its success spread far and wide and proved more ever-lasting that one could have foreseen.

For every tzatziki lover in the world is a tarator lover who just doesn’t know it yet. If tzatziki is a dip, tarator is more of a cold soup that is best served on a steamy hot summer day. The ingredients are almost the same for both recipes, consisting of diluted yogurt with cucumbers, garlic and oil, although the Bulgarian version usually adds some walnuts and dill instead of mint.

Again, this dish can be found throughout the Balkans, each country adding its own twist to it, and it is no mistake since the whole region remained under the influence of the Ottoman Empire for so long. The word tzatziki is indeed said to derive from the Turkish word cacik. Still, it’s the perfect dish to try in the country that prides itself in inventing yogurt, to be complemented with a glass of ayran, a refreshing drink made of salty yogurt.

: Not to be mistaken with the Turkish kebab and even less so with the Western European doner, kebapche is a typically Bulgarian dish made of grilled minced meat with spices, such as cumin, black pepper and salt. Kebapche is then shaped into an elongated form, which makes it look a bit like a sausage or a skewer.

The preferred meat for kebapche is a mix of pork and beef and this dish is eaten on its own, sometimes with a side dish of salad or with a typical dip like lyutenitsa, a vegetable chutney comprising of peppers, tomatoes, carrots and garlic. However and contrary to the Greek souvlaki for instance, kebapche doesn’t come with pita or bread.

When travelling through Europe, one recipe always seems to be a recurring theme on the menu. Every European country has its own take on sausages, from Spanish chorizo to Italian salami and French saucisson to Austrian Vienna sausage. Bulgaria too belongs to the list thanks to its very own lukanka.

This type of sausage comes closer to the Italian salami but it is usually spicier and has a stronger flavour. The traditional lukanka is made of pork and veal meat with additional spices such as pepper, cumin and salt, stuffed into a cow’s intestine. It is a semi-dried type of salami that is hanged for about 40 to 50 days before serving, usually as an appetizer. Some regions in Bulgaria are particularly well-known for their lukanka, including the Karlovo region which gave its name to the Karlovska lukanka.

Baked filled pastries, called börek in Turkish, are a classical type of dishes found in Turkey that date back to the Ottoman Empire and spread in the whole Middle East and in Eastern Europe. Yet, they might have predated the Ottoman era and been part of the culinary traditions of the Byzantine Empire, dating as far back as the Roman Empire.

Banitsa is the Bulgarian take on this very familiar dish, which is made of a mixture of eggs and cheese between filo pastry. Other common ingredients are spinach, ham and cheese or even pumpkin. Banitsa is usually served for breakfast along with ayran and yogurt but it can also be eaten as a hot snack.

If you get the chance to visit Bulgaria, do not miss on all these amazing dishes and if you can, try to eat at least once in a traditional restaurant where you’ll be able to enjoy traditional music, dances and songs, to add an extra layer to your foodie experience.

Let us know in the comments which dishes you’d like to try and which ones you think should belong to the list!

Hiya, @itchyfeetdonica here, just swinging by to let you know that this post made into our Top 3 in Daily Travel Digest #604.

A wonderful blog with great looking traditional food @haydae I eat salads similar to the Shopska salad as i particularly love cucumber and feta cheese. That recipe certainly has been around for a long time hasn't it?

Another very old recipe I'd like to try is the Banitsa. It looks very tasty indeed.

Thank you for your comment!
The shopska salad was particularly good indeed and you can find a lot of similar dishes throughout the Balkans. Surprisingly though, it’s only been around in Bulgaria since the 1950s!
As for the banitsa, it’s a really interesting dish as it comes in all shapes and sizes so there’s one for every taste. :)

Last year I have been to Sofia, unfortunately, I did not try any of them... they look delicious.

That’s too bad you didn’t get to try all these dishes while you were there, although it’s true that it’s easier to find foreign restaurants in Sofia than traditional ones. I hope you’ll get the chance to try some local food on your next visit though!

When I was in Sofia I have eaten only Bulgarian food but I did not have the ones you mentioned. Probably in Sofia not easy to find them I do not know

Amazing post, wonderfully written and great shots. I've just travelled there and tried all that food you've mentioned. I also wrote a similar post of food of Bulgaria, feel free to check @pushpedal

Thank you very much for your kind comment.
I’ve just checked your own blog, which was very informative too with some great pictures so kudos to you. :) It seems we’ve shared similar experiences while in Bulgaria. I also went to a traditional restaurant where performers did some fire dancing so that was quite the intense dining experience!
Glad you’ve enjoyed this post anyway. :)