Visiting an old quartz mine. 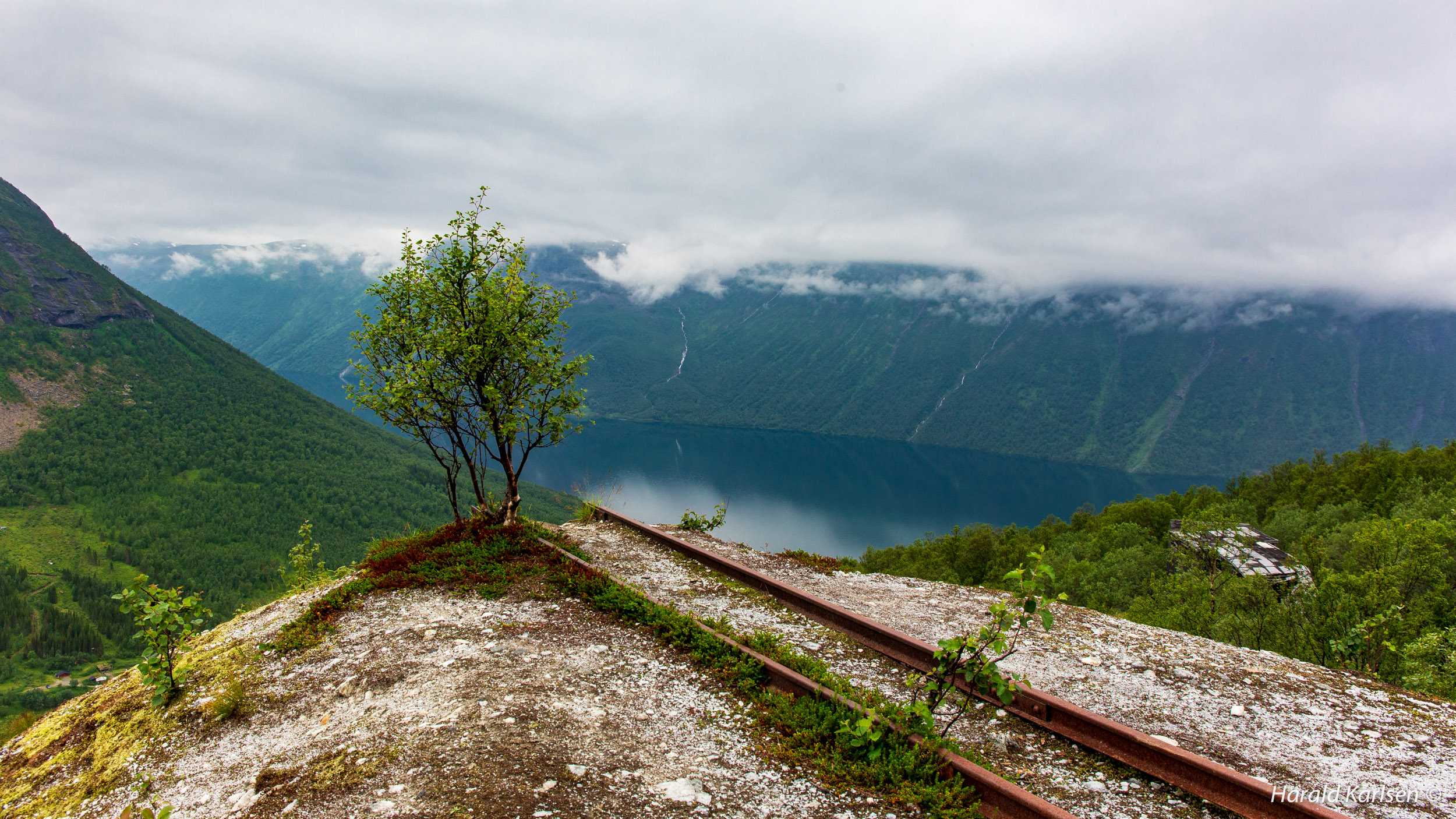 Up in a valley called Råndalen around 15 km outside the city Narvik is an old quartz mine located. The daybreak is 380 meters above sea up in the mountain. There is no road up to the construction area, only a track. It takes around 1 hour to walk up to the mine. All transport was done by a cableway up and down from the mine. The mine operated from 1949 to 1966.

The 16 workers and 1 chef lived in barracks at the daybreak. Among the many abandoned mining facilities and quarries in Ofoten, "Quartz" is perhaps one of the most exotic and complete. In the construction area you can see crew barracks, forging, and air compressor housing. At the cable car station you can see electric motors and the loading equipment. In the quarry stands the cradles and lavettes. The loading ramp is dilapidated.

The trail winds up the mountainside in old birch forest.

On the way up is one of the mast to the cableway.

The first sight of the crew barracks.
When the operation stopped, the mine was abandoned and a lot of equipment was left behind. Some of this is still around and tell a little about the story of the site.

The entrance to the crew barrack.

In this building is the forge, and air compressor housing. The compressor was used to operate the drilling machines.

The water reservoir. Today it was great for cooling down.

The quarry. The mine operated over a period of 17 years. With todays equipment it looks like a few days work is done.

Made in Oslo, Norway.

The quartz was transported on wagons on a trackway to the loading station.

Rocks and stones of bad quality was dumped here.

Nero enjoying the view towards the valley on the edge of the dumping area.

The building has collapsed.

The cable car station. From here the quartz was transported down to the valley with the cable car, further on trucks to the sea and loaded on boats.

The loading ramp to the cable car. The pictures below shows the machinery inside the building.

After exploring the site I deserve a rest.

After a days work the workers had to take a wash and change clothes before dinner.

Clothes and shoes are still hanging in the wardrobe. The time has stopped for 53 years.

A rest from an old newspaper, someone had spent some time with the crossword.

After a days work the chef made dinner in the kitchen....

... and maybe served the workers through the opening in the wall.

After a hot meal, storytelling, coffee and crossword in the evening the workers went to their rooms for a good nights sleep. I listened carefully and could still hear the snoring from the workers :-)

It was fun and interesting to take a look at the mine. Especially when there is so many things that is left behind. The story about the mine is clearer even without words.

A part of the mountain where the mine is located.

At the end, a flower in memory of the workers.

Hope you liked this long trip up to the mine. Best norwegianenglish regards.

PS. Looks like something went wrong with my experiment with posting in communities, better luck next time :-)

Never been to a quartz mine! Would love to find one!
Nice walk!
Nero looks great!

Amazing photos and what a cool place ! I really like these old places, where time has stopped and you get to use your imagination to puzzle together what has happened there

Yes it is fun, lots of history. Thank you.

That must have been an interesting experience - abandoned places are always cool to visit, and such a mine even more. Interesting, that the clothes and shoes and such are still there - just as they had to leave from one minute to the other.

I would be quite !DERANGED if I didn't give you a !BEER and a !COFFEEA for this $trdo post 😉

Congratulations @johannpiber, you successfuly trended the post shared by @harkar!
@harkar will receive 0.39353850 TRDO & @johannpiber will get 0.26235900 TRDO curation in 3 Days from Post Created Date!

Someone told me they stopped the mine fast, and left without take something from there. No road and difficult to clean up. Inventory and tools disappeared slowly, taken, visitors...(terrible english:)

I have seen a video on Youtube a while ago where also a mine has been left from one day to another. They also have left everything there.

Thanks a lot for the reply, Harald, have a great weekend 🙂

To give a !DERANGED and a !BEER is an easy and simple way for me to say thank you for being nice, and giving an additional !MARLIANS or !COFFEEA means I thank you even more 😉Posted with ![](https://cdn.steemitimages.com/DQmbroYujK9LNd2s8zDKPUCADmseyJDuNbhwBPrrF7xM8FL/logo-comment.png)

It was very interesting, I wonder how long it will take to everything is collapsed. Have a great weekend too😊

I might be a bit !DERANGED but not only I have a !BEER for you today, but also a !COFFEEA which I have bought at the !MARLIANS !shop 😉Posted with ![](https://cdn.steemitimages.com/DQmbroYujK9LNd2s8zDKPUCADmseyJDuNbhwBPrrF7xM8FL/logo-comment.png)

Lucky you @harkar here is your COFFEEA, view all your tokens at steem-engine.com Vote for c0ff33a as Witness

Lucky you @harkar here is your COFFEEA, view all your tokens at steem-engine.com Vote for c0ff33a as Witness

Hey @harkar, here is a little bit of BEER from @johannpiber for you. Enjoy it!

Hey @harkar, here is a little bit of BEER from @axeman for you. Enjoy it!

Hiya, @choogirl here, just swinging by to let you know that this post made into our Top 3 in [Daily Travel Digest #742](https://goldvoice.club/steem/@steemitworldmap/travel-digest-742).

Thank you very much 😊

Wow. Amazing photography and look at the view. Incredibe

Thank you very much. I am very glad you liked it 😊

What an amazing adventure. Loved it 🙂👍

Great. Thank you very much.😊