The next destinations in Sacred Valley: Salinas de Maras and Moray 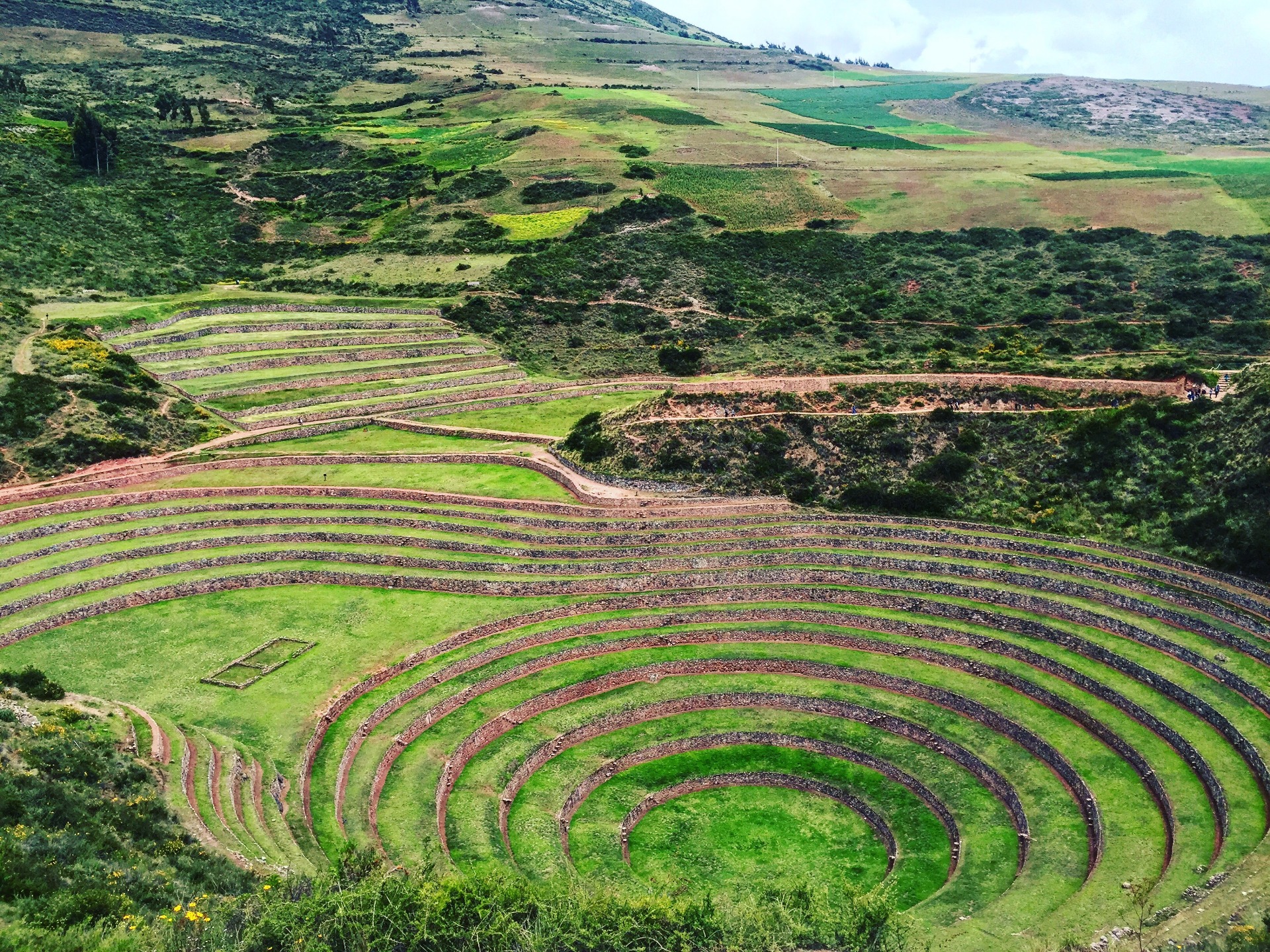 Read "The next destinations in Sacred Valley: Salinas de Maras and Moray" on TravelFeed.io for the best experience

When it comes to Inca’s ruins, most people definitely think of Machu Picchu as it is the most impressive heritage of the largest empire in the Americas, which is still well restored nowadays. However, that is not Inca’s legacy all about. There are so many things other than Machu Picchu surrounded in, or nearby Cusco. I can list some of them such as Chinchero, Ollantaytambo, Moray, Pisac, Selinas de Maras, Qorikancha, etc.

As mentioned in the previous post, the Sacred Valley tour which offered concentrated stops at Chinchero, Moray, Maras, Ollantaytambo and Pisac was well worth spending time and money to be on. The first stop in Chinchero for me was definitely a pleasant experience. However, a full day of sightseeing was still ahead, and I believed that the best thing was yet to come.

Leaving Chinchero with the feeling seemed unable to part, we’re on our way heading straight to the next destinations in Sacred Valley: Selinas de Maras and Moray.

Located 40km north of Cusco, Selinas de Maras is hands down one of the most incredible sites in Sacred Valley. It was totally different to anything I had seen before, as I was more familiar of this scene somewhere near beaches rather than mountainous area.

The first impression of mine when getting into the site was just “wow”. Located halfway up the slopes, a long the sunny side of the mountain, the Selinas de Maras created a symphony of brown and white colors from thousands of salt ponds which had been there for centuries.

What an unexpected treat to see the existence of an extensive salt mining place in the middle of Andes which would leave you not just plenty of opportunities for amazing photograph but also many questions of how it was even possible.

The Incas took advantages of the mountainous terrains to build up those terraces in order to dry out the salt from the natural salt spring. And that spring alone continuously feeding the entire field with a cleverly diverted flow system. The way they channel saltwater to fill up all the terraces, pond by pond was incredibly impressive.

Living on coastline, I was no stranger to the salt extraction work, but it still amazed me for the unique way of mining salt which had been used by locals since Inca time. Many centuries have passed and the fact that nowadays the saltpan is still in use and remains the same irrigation system just like hundreds of years ago. It really made me wonder how the Incas did ever figure it out in that early of time.

I heard that there was a huge amount of salt deposits in the Andes which made the spring water even much saltier than the seawater. If you come here, don’t hesitate to have a try. Dip your finger into the water and taste the nature, to see if it’s truly salty or not. There was a funny story that when I saw kind of white stuff all around the edges and the rocks on the saltpan, I got closer and thought it was definitely crystal of salt. Then I scraped it from the rock and tasted, but it turned out to be just rock. xD. So lame.

It was also very interesting to know that this place was owned by local families for centuries and each family took responsibility of the whole salt production process of each pond.

Admiring the site was amazing but getting to know the story behind it was way much better. This is one of those places that someone could explain to you easily, but it could be so pedestrian just by hearing about it. You have to see the vastness of the place and the whole process of mining and harvesting salt here to really appreciate it.

Thanks to the visit to Selinas de Maras, I may look at salt in different way onwards. I didn’t know the salt could be that interesting to see. xD

Just about 15 minutes drive from Selinas de Maras, you will soon enough get to see one of the most visited Inca’s ruins in Sacred Valley – Moray. Here is a very valuable place in term of archeological and also a famous attraction for tourist to admire the intelligent of the Incas.

Despite the simple look of an amphitheater, Moray actually has a lot of stories and theories to tell. Known as an Inca engineering mystery, there is an enormous amount of unanswered and perhaps unanswerable question that arise from the use of Moray, which make people have wondered for decades if it is religious or agricultural, farming terraces or a worshiping place.

Although the intended usage purpose of the ruins is still a mystery, I preferred to see it as an air open greenhouse or an agricultural station of the Incas rather than any other hypotheses.

Moray contained of various concentric circles growing smaller toward the bottom. The quality of the original stonework was absolutely amazing. There were a few certain parts of the terraces had been falling apart due to weather events, but it was obvious to realize the effort of local government to keep the site well restored and structures remained intact as much as possible.

The photos make it seems so small and didn’t do the actual site any justice. It is about 2 meters depth between each terrace. You can do the math and imagine how huge it is. There was a path to walk down into the ruins and also stairs for visitors to climb down the terraces. I didn’t go down to the deepest circle due to the altitude sickness. The way going back up would be too much for me.

The view was out of this world but the most impressive thing for me was to know the cleverness and complexity in agriculture-applied science which the ancient Inca had achieved since the dawn of time.

Moray was a brilliantly designed agricultural laboratory to experiment various species of crops and allowed the Incas to study wild vegetation by planting them on different levels of the terraces which was believed to have different temperature and micro-climate, and by that, the Incas could figure out what kind of condition would be the best for which crops. Is that impressive?

Their depth, design and their orientation with regard to the sun and wind are all telltale that they have a specific purpose. Because the different conditions at each level of the terraces there is a difference in temperature of 15 C degree from the top to the bottom.

The site itself was truly a magnificent example of the Incas’ mastery in agriculture. Visiting Moray would leave you immersed in wonder how beyond and ahead Inca intelligence was of their time in science. This was also a reason that I chose Moray as the second most impressive ruins of the Inca which I had visited, just after Machu Picchu.

For those places like Moray, it is suggested to go with a knowledgeable guide. Simply because history, theories and information would definitely make it way more interesting to visit.

Congratulations @hanggggbeeee, you have received a 50% upvote. I'm the Vietnamese Community bot developed by witness @quochuy and powered by community SP delegations

Thank for showing around such a beautiful place. I haven´t seen salt pans in mountains yet, very interesting. My pleasure to get you some extra support for your work :) Keep it up.

Thank you very much for your support ❤️

Congratulations @hanggggbeeee! You received the biggest smile and some love from TravelFeed! Keep up the amazing blog. 😍 Your post was also chosen as top pick of the day and is now featured on the TravelFeed.io front page.

Thanks for using TravelFeed!
@worldcapture (TravelFeed team)PS: Why not share your blog posts to your family and friends with the convenient sharing buttons on TravelFeed.io?

Thank you so much 🤗

This is first tine ever I got upvote from your curation. Thank you for your support ❤️

Your post was upvoted by @steem-ua, new Steem dApp, using UserAuthority for algorithmic post curation!
Your UA account score is currently 3.815 which ranks you at #4981 across all Steem accounts.
Your rank has not changed in the last three days.

In our last Algorithmic Curation Round, consisting of 118 contributions, your post is ranked at #76.

Hiya, @LivingUKTaiwan here, just swinging by to let you know that this post made into our Top 3 in [Daily Travel Digest #746](https://goldvoice.club/steem/@steemitworldmap/travel-digest-746).

It is my honor to be in your Daily Travel Digest. Thank you for your support. ^^

That’s a fantastic place to explore and absorb the energy of the land.