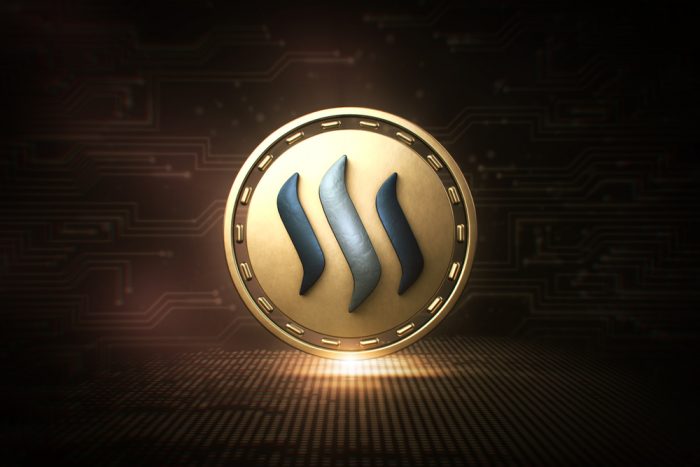 History of the Steem cryptocurrency (STEEM)
July 02, 2018 Chris Wheal
Steem is the first cryptocurrency that attempts to monetise online content. It rewards individuals who make contributions to its blogging platform Steemit.

Steem coin
When it launched, Steem became the third largest market capitalisation of all cryptocurrencies: Shutterstock

The token is rewarded based on the user’s performance within the community and the number of upvoting. As smart media tokens accumulate, they can be cashed out for fiat currency.

When it launched, Steem (STEEM) became the third largest market capitalisation of all cryptocurrencies. Yet, the novel platform blockchain has sparked controversy with a mix of critics and supporters, with many saying there are too many confusing concepts.

It has a market cap of $339.2m and at the time of writing is ranked 33rd It has more than 265 million of its virtual coins distributed.
A brief history of Steem
Steem (STEEM) was created in New York in 2016 by Ned Scott and Daniel Larimer. Larimer had already developed a cryptocurrency exchange platform called BitShares in 2014. He is also the developer of the Delegated Proof-of-Stake consensus algorithm.

Scott and Larimer first discussed using the hivemind trust of blockchain to create an insurance network. The idea was that a group of people were incentivised to pool money that could be drawn upon by an individual in the event of an accident or emergency.

Scott said it quickly grew into a much larger vision and Steemit was born as a place where individuals get rewarded by a community for posting and voting on content. He said: “We kept coming back to the idea that the most useful and powerful thing to leverage around a cryptocurrency is a community.”

Steem has already paid more than $40m to its users, and there are almost one million accounts in the Steemit social network with one and a half million publications being made each month.

Community criticism
The project is not without its critics and some market observers expressed their concerns that Steem might be either a pump and dump scam or a Ponzi scheme with some predicting that the digital currency would quickly collapse when it runs out of new users to deceive.

Steemit’s creators have responded to criticisms by pointing out features such as Steem Power. Users who hold more tokens in their account as “Steem Power” for three months get to decide where a larger portion of the rewards pool is distributed. This encourages Steem community members to invest the assets back into the platform.

Key players
Dan Larimer – co-founder of Steemit Inc and chief technology officer until March 2017. He is also chief executive of Cryptonomex Inc. This is a blockchain technology consulting company that was founded with his father, Stan Larimer. Larimer also founded the decentralized exchange BitShares, Invictus Innocations and the EOS blockchain.

Ned Scott – co-founder and chief executive of Steemit Inc. A former financial analyst, Scott said he was fascinated by the economics that drive cryptocurrencies.

Ned Scott – co-founder of Steemit, Inc, said: “We kept coming back to the idea that the most useful and powerful thing to leverage around a cryptocurrency is a community. Steem was born out of ideas about insurance and mutual aid: it was the idea that people would be able to help each other peer-to-peer if they were struggling to solve problems or needed assistance.”

Joe Lee, co-founder and CIO of digital currency trading platform Magnr, said: “The concept itself is interesting, it is a Reddit and Quora mashup with a strong monetary incentive to produce good quality content. Whether Steem succeeds as a digital currency will be more a reflection of Steemit’s success as a platform as opposed to the economics of the coin itself. This is a good example of a digital currency whose value will be closely affiliated to its utilitarian value as a social networking and sharing platform.”

Petar Zivkovski, director of operations for full-service bitcoin trading platform Whaleclub, said: “My first impression is that it is a ‘pump and dump’ crypto where accumulators (founders, early adopters) will be looking to cash out on a major pump in price (distribution). Whether it survives longer term remains to be proven.”

Tone Vays, head of research at BraveNewCoin, a company that provides data and analytics about the cryptocurrency market, said: “I don’t know why it has value. It just goes to show how you stick the words ‘New Crypto’ in front of something and speculators just come running.”

The following has worked in the growth and development of steem
@busy. Org @byteball dag @steem @steemfest
Etc