Whole district violates the law - New Year's Eve, people firework by themselves to brighten the sky 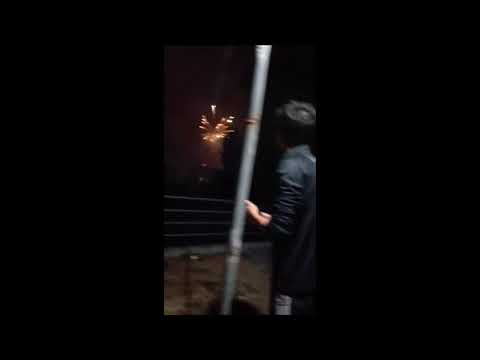 Hello everybody
This video was shot by my daughter on New Year's Eve (Lunar New Year) in 2019. Today, I have time to edit and post. It's a pity that she didn't make good videos, I will shoot in New Year's Eve 2020 so that you can see the sky where I live (Quynh Long, Quynh Luu, Nghe An, Viet Nam). Hi

Every year in my hometown is like this even though fireworks are banned nationwide. Not only Quynh Long ward but also some other wards in Quynh Luu district do the same.The work of preventing people from setting fire to fireworks by themselves is carried out before the end of New Year's Eve about 2-3 months. Includes loudspeaker propaganda and arrest of fireworks / firecracker dealers, but in New Year's, the artillery still flooded the sky. Also depending on the year, the economic difficult year, the fireworks will be less. Just by looking at the amount of firecrackers and the duration of the firecrackers, it was possible to know if the economy that year was good.

Actually, ever since firecrackers were banned, the price of firecrackers increased every year, increasing and forever (_This may also be due to inflation_). :) In contrast, over time the government has organized fireworks in more places. If you live in Vietnam you can feel this over the years.

Subscribe to the channel to update the latest videos at here: http://bit.ly/2ldO9Dc

Hi. You are right, only the government has been allowed to fire fireworks in Vietnam since 1995. :)
I agree with the gun ban view :) That's why the Vietnamese media always preach about safety in this country.

In Saigon, people would say that district 4 was the most dangerous because of the gangsters with big long knives. Oh, by the way, you can see how they ban guns in Vietnam, Australia, New Zealand, Germany in the 1930's (Hitler), China, England, some Gun-Free Zones, etc. You can see that they banned guns in Chicago and yet many African Americans have shot each other there. So, the crime has been higher in Chicago.

I also lived in SG for 12 years, long enough to understand SG. Criminals are mostly immigrants.
I think that gun bans don't reduce crime rates. This only helps the crime level reduce the damage or or prevent big offenses due to lack of weapons & even to ensure the safety of the government.
10 years ago, I heard many robbery cases to rob people in District 4 and District 7, I didn't read the newspaper at that time, only heard it over, so it was unclear exactly but very scary. District 4 is so famous that there are several mock music related to crimes there. But really I am afraid of Vietnamese people when they are in other countries. If you search, you will find many large Vietnamese gangs operating in other countries. There are gangs in Vietnam, too, but if the gangs are big, I will definitely get the support of officials, so it's rarely known. :)

The hard part is response time. If somebody tries to kill you, the officials, the police, may not get to you fast enough in order to save your life. In some cases, it can take several minutes for cops to get there in order to respond. But murderers, gangsters, criminals, etc, can pull out a knife, gun, etc, in seconds. It only takes a few seconds. That is why I was learning some karate.