The most polluted air in the world & scary silence! Air pollution levels in some northern provinces and Hanoi are getting worse in recent days, but the most frightening thing is the "silence" and insecurity of the people.

I was stunned when I read these lines: “On December 13, air pollution levels in some northern provinces and Hanoi worsened, to the point of serious impact on human health. But neither the Hanoi Natural Resources and Environment Department nor the General Department of Environment have made any recommendations. ” on tuoitre.vn 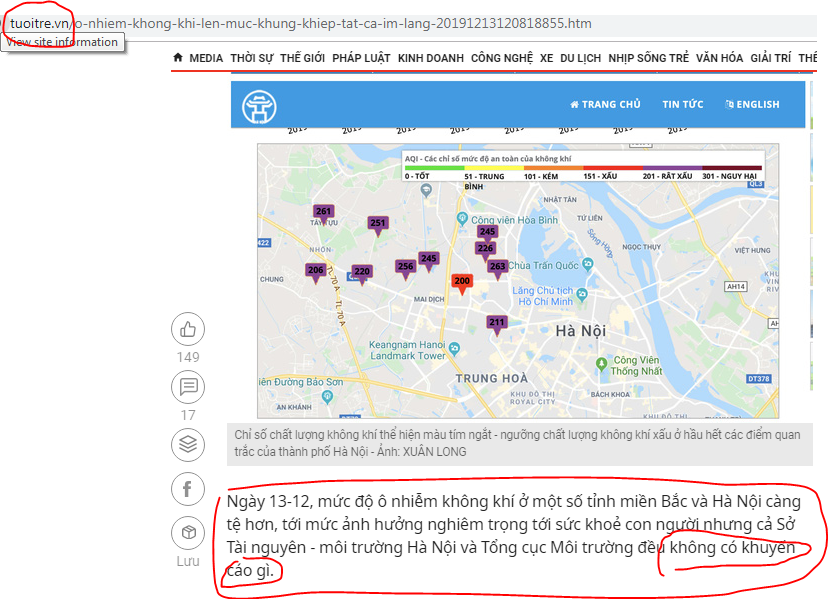 They are silent because we are supposed to breathe like that and there's no other way? What are they not recommending because they think it is another agency's responsibility? They ignored it because they thought that after a few days everything would be back to their original state? ... No one knows, nobody has the answer because they are silent and still silent. That's all!

Perhaps people think that the smoke will melt or people have already gotten used to it, if they warn or do something, they won't get better or can't "ban" breathing? I don't know why people are so indifferent or indifferent. If the numbers are noisy, noisy excessively necessary or do not die, they should also enter the word "highway" for people to know. Otherwise, do something right to make people safe.
This is not the first time pollution to such an alarming level, It's not too surprising to not react or manage in time.

But what I'm more afraid of is not only that, everyone goes to the streets to celebrate the victory of a sport, but no one took to the street because the air was so polluted, even though they breathed it daily. Vietnamese people are strange, very strange!

We always talk about China and India having bad air. Holy crap, who knew Vietnam, Poland, etc. have it just as bad.

I think this is the aftermath of developing coal-fired thermal power, due to the import of Chinese technology. Although the cause can be explained by our administration in another way.
Thanks for stopping here & have a great weekend :)

Oh this is a great joy and full of surprises for me.
Thanks for everything and I will check out the information you have provided, especially about witness soon!

415!!! Holy crow, that's bad!!
This past summer we had some days in the 150s and that was so bad for me I started coughing so hard I almost passed out. I have a mask now for when the days get that bad. We have a lot of fracking and other oil pollution here, and the mountains being so close can sometimes trap it and we get "the brown cloud." But it's really bad when there are wildfires added in to the mix. :( Just a couple of days ago the oil refinery had some kind of incident where it released a brown greasy substance into the air and schoolchildren a mile away were told to stay inside. When they were allowed to go home, the teachers' cars in the parking lot were all coated in the stuff. The refinery said it was "safe," naturally.
But still, even with all our problems I've never seen us go over 200 let alone 400!! I can't imagine. :(

I don't know what else to say, it's really bad, but we live in silence, it's different from the pollution caused by wildfires.
Perhaps I will synthesize a video about the atmosphere of Ha Noi in recent days. I have not seen any action from anyone!

Have a great weekend & thanks for stopping!