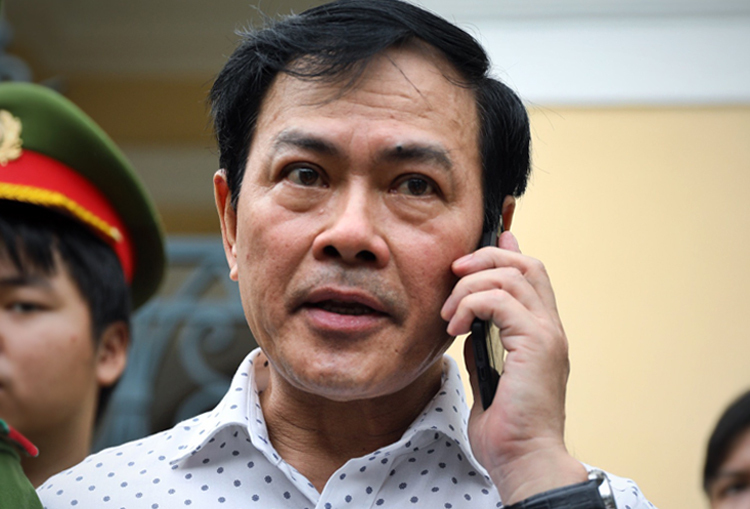 _The defendant after the hearing. Photo: Huu Khoa_
On April 1, 2019, Nguyen Huu Linh was said to have takes liberties (sexual harassment) a girl (8 years old) in an elevator at Galaxy 9 Apartment on Nguyen Khoai Street, Ward 1, District 4, Tp. Ho Chi Minh. The security camera of the building recorded the action, the video was posted online and made widespread on Facebook.

At 930 am on April 2, 2019, the Apartment Management Board invited the owner of the apartment to come to work and this person confirmed the man in the clip of harassing the girl in the elevator was Nguyen Huu Linh. After showing the clip in the elevator, Nguyen Huu Linh admitted hugging and kissing the baby girl. Management noted the incident by making a record and signed by Mr. Linh.

After the incident, Mr. Linh and his family had a talk. After that, both parties had "negotiated" about the case. After exchanging, the girl's parents invited a representative of the Management Board to witness and record the minutes with the content: The family did not want to make a big deal out of fear of affecting the psychology of the baby girl and the girl's parents "decided mediation and offer not to provide information outside ". However, the management board of the apartment building, the investor ... reported to the local police.

Nguyen Huu Linh was born in 1958 in Hai Chau district, Da Nang city. He used to be the Secretary of the Party Committee and Deputy Director of Da Nang People's Procuracy. Mr. Linh was also the Head of the "For the Advancement of Women" Committee, Da Nang People's Procuracy.
After retiring in June 2018, Nguyen Huu Linh has Party (Communist Party VN) activity in the locality (Thach Thang ward, Hai Chau district, Da Nang city), and also registered to join the City Bar Association, now granted membership card but not yet practicing.

The first trial of Nguyen Huu Linh took place on June 25, 2019. The family harmed in this case has filed a petition to the court for an absentee trial and denied the lawyer protection. The Court requested that records be returned for additional investigation. On July 25, 2019, the People's Procuracy of District 4 issued an additional indictment, continuing to prosecute accused Nguyen Huu Linh of lustful crimes against people under 16.

On November 6, 2019, the HCMC People's Court of Appeals declared a first-year and six-month prison sentence for Nguyen Huu Linh.

The video you are watching is images after the end of the appellate on November 6. We can see him stepping out leisurely, holding the phone, carefree boarding in a car, like a senior leader. In addition, when the court read the sentence, the Court pronounced "sir" rather than "the accused" as in other cases.