Splinterlands: A Walkthrough of the Basics of Gameplay for New Players - Cards, Stats, Abilities, and Deck Lineups!

Splinterlands, and you see all these awesome cards, and various items in the shop, and tournaments, and FAQ... and it can all be a bit overwhelming! I figured I would make a little walkthrough for new players, mostly regarding Ranked Gameplay, so you can get started playing immediately, and then figure out all of the additional perks and things after you've had some fun!

made an account, and have either purchased a Starter Pack or used a Promo Code to have a fully activated account. If not, you'll want to do that, then you'll have free-reign to participate in quests and earn rewards from the Ranked Play explained below. However, if you are using a FREE TO PLAY account, you can play matches, so this walkthrough will still be useful.

Each card has some information on it that you'll want to learn, so please check out the images below, and save them if you'd like. Once you understand these basics, you can start effectively playing! 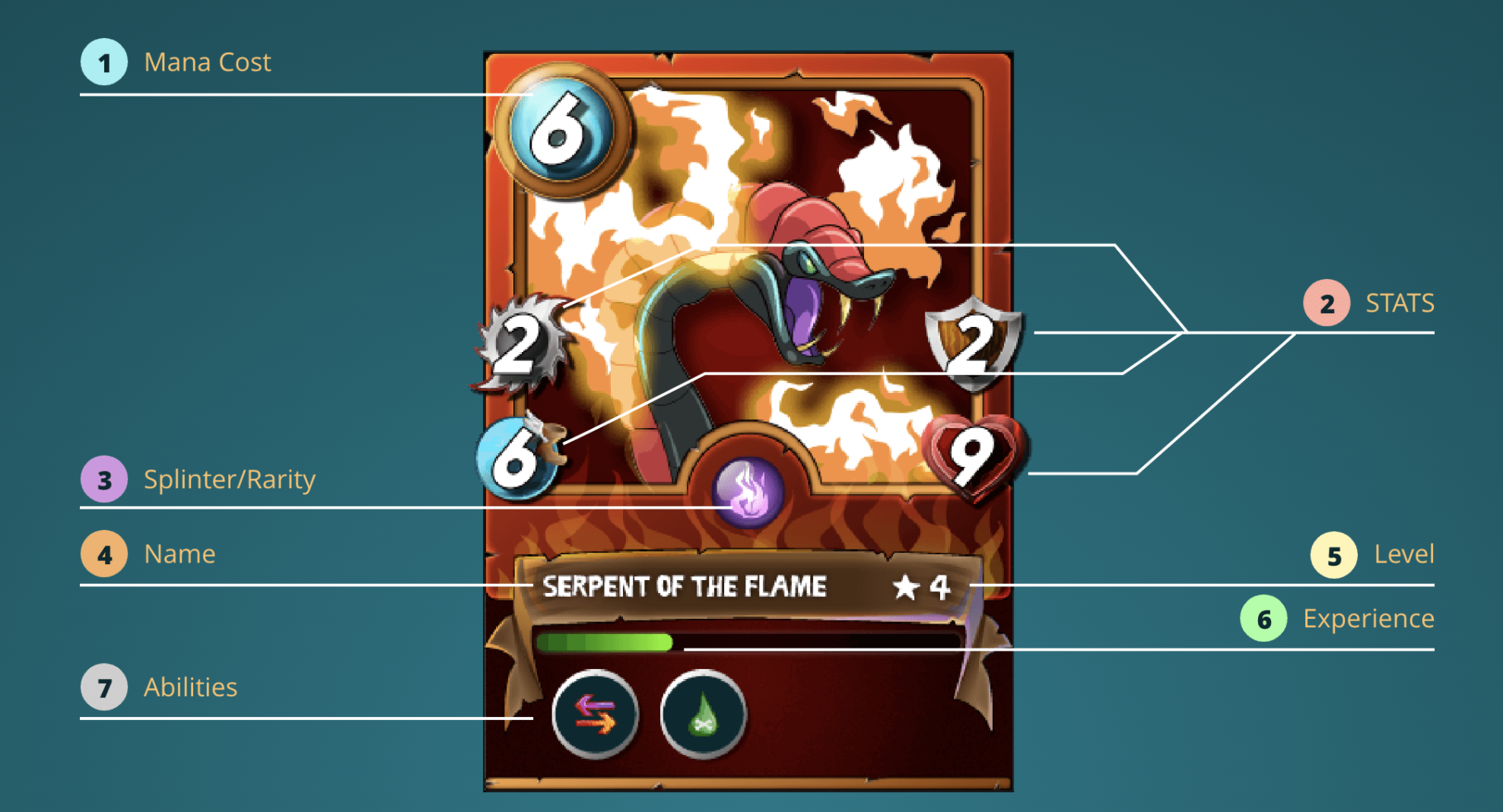 To start playing, you'll first want to go to the BATTLE page.

If you're on mobile, you'll click the 3 bars in the TOP RIGHT, and then go to BATTLE from the drop down menu.

After waiting in Queue, you'll be matched against an opponent! You'll then click "MAKE TEAM" (the Green Button) to choose a Lineup and begin to Battle! If you want to skip this opponent, you can click 'SURRENDER' (the Red Button), and you will end the match early. You will lose rank for surrendering though, so only do it if you really need to!

You can also see the MANA CAP and RULES for the match on this same menu. When you begin, you'll get STANDARD rules generally, but as you progress, more Rules and Mana Caps will begin to show up. These change each match, so you will want to familiarize yourself with them as you learn the game. 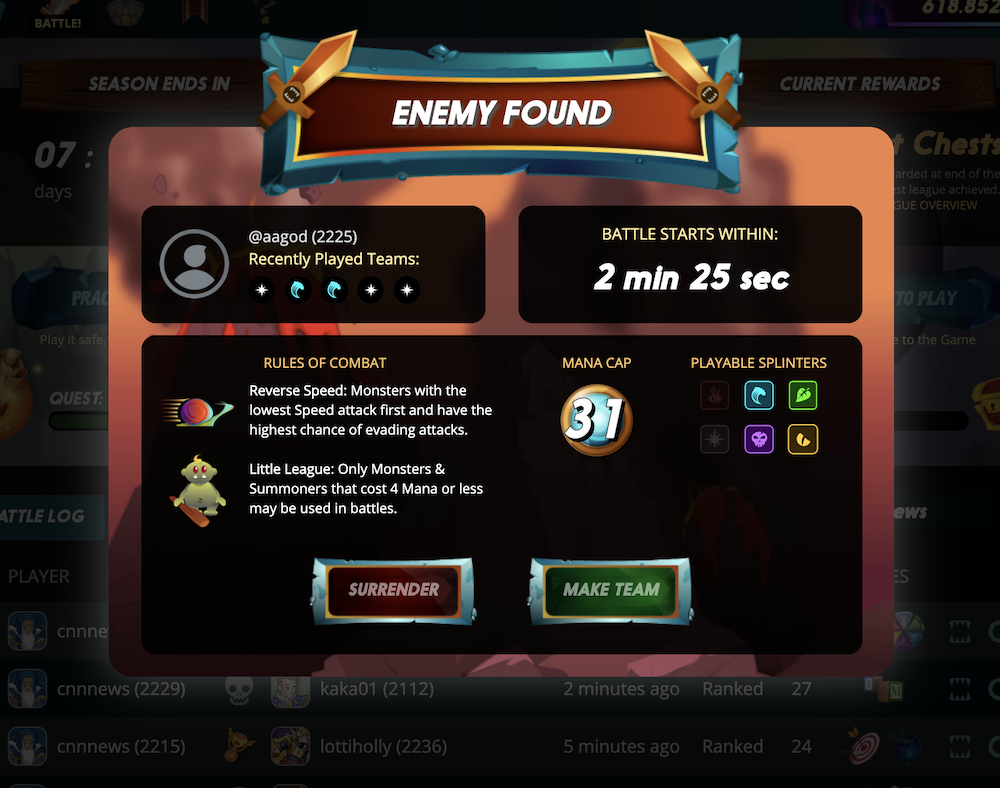 This is where things can get a bit confusing! You'll be asked to pick a 'Splinter', out of the 6 possible: Fire, Water, Earth, Life, Death and Dran! Dragon works differently than the other 5 splinters, and when you first begin, you won't have a full Dragon deck like you do with the others, just the summoner, though I'll e plain it below so you can understand how it works.

The cards you will see here are your SUMMONERS. These determine which Splinter you will be forced to use after selection. Fire can only use Fire, Water only Water, etc. NEUTRAL (GREY) cards can be used with any team, unless the rules of that match specify otherwise.

You'll notice that each card has a MANA Cost. Every match, you are allotted a certain amount of MANA, and each card uses up a portion of that. IE: You have a 20 MANA match, and select a 3 MANA summoner (as pictured above), you would have 17 MANA left to use for monsters. Always plan around this, and try and fill up as much of the allotted MANA, if possible!

After selecting your Summoner, and thereby your Splinter, you will need to make your Deck! There are some very basic rules/strategies you'll need to understand to make your Decks effective. I've divided up each DAMAGE TYPE below, and explained in what order/position certain types of cards should be used to be most useful. Don't forget to check MANA costs!

The FIRST card in the Line-up is your TANK card.

It generally should be a MELEE card, though there are other options, which you'll see as you play more. Melee can only be used from your TANK position to attack the enemy's TANK, unless the card has REACH or SNEAK (explained below). 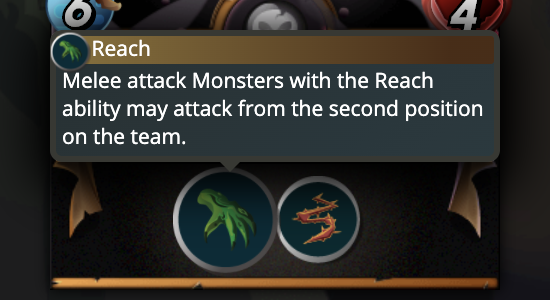 Melee cards with SNEAK are able to attack the LAST monster in your enemy's lineup from ANY position besides the TANK position. (SNEAK will also show up for RANGED and MAGIC cards). 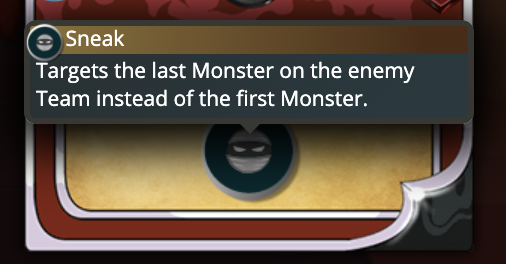 You may also discover the OPPORTUNITY ability, which allows a card to be placed anywhere in the backline, where it will attack the enemy card with the LOWEST health, no matter its position. 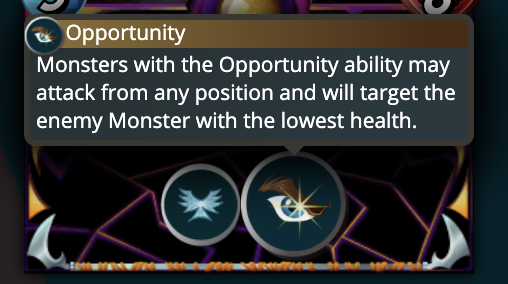 RANGED attacks, in most Rule Sets, can be used from any position behind the TANK. There is a Rule where RANGED can be used from TANK too, but you won't discover that until later in your gameplay. Always remember, if a RANGED card is moved to TANK position after other cards have died, it cannot attack, though it can still use certain other abilities, like HEAL. 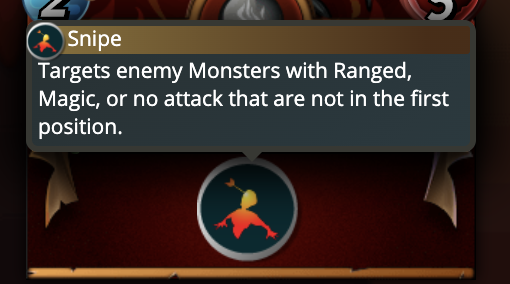 MAGIC Cards will generally be used behind your TANK, though, unlike RANGED, when they are used in the TANK position, they still can attack! You'll want to plan your decks around this, as when your TANK dies, you may want MAGIC to replace it, and allow your RANGED time to continue to survive and attack from the back-line.

MAGIC cards can also have SNIPE and SNEAK, both of which function the same as they do for MELEE and RANGED. 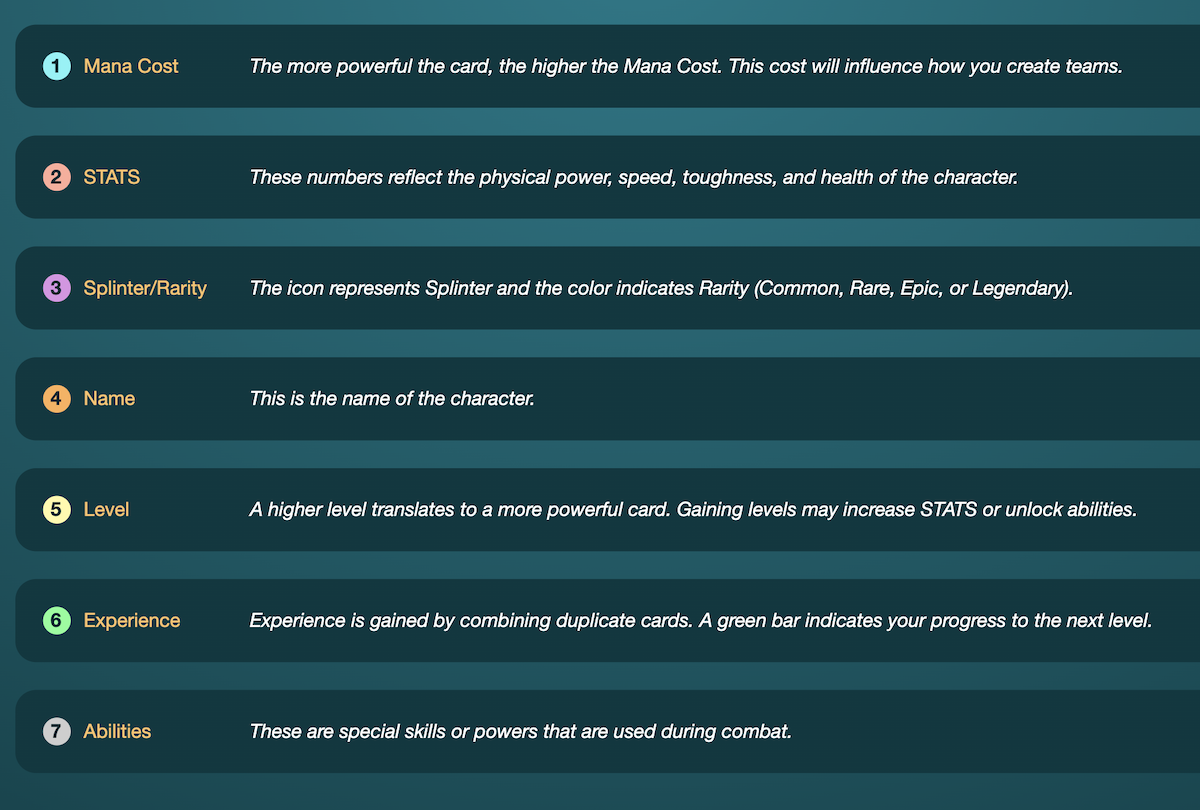 There are LOTS of abilities you'll want to explore (click here to see them on the HOW TO PLAY page), so I won't go through them all, but one area that confuses a lot of new players is HEAL vs. TANK HEAL vs. TRIAGE.

If a card has the HEAL ability, that means it will HEAL itself each round. If it has the TANK HEAL ability, it will ONLY HEAL the card in your TANK position (again, that's the FIRST card up).

TRIAGE is a newer ability, which heals the monster in your back-line which has the LOWEST health that round.

I hope this Walkthrough helps you on your journey into the world of SPLINTERLANDS! Don't forget to come to the DISCORD, the TELEGRAM and the FACEBOOK PAGE, and get involved with the community! If you have any questions, there are always players and team members willing to assist however they can!

Click here to listen to all of my Steem Monsters inspired songs!

Great post! I want to give this an SM upvote but it's too soon! :-(

all good! just share it with new users, and I'll be happy! lol.

glad you found it useful! feel free to share it with anyone who needs the info!

Thanks for putting together all this !monster detail @grapthar. Never surrender! :)

you're very welcome! share it with any new players if you'd like, so they can start playing right away!

Informative publication. I have learnt most of those specific abilities through trails and failures.
Battle on

Glad you found it informative! Yea, the best way to learn the abilities is definitely just through trial and error. That's how I figured most of the details out too.