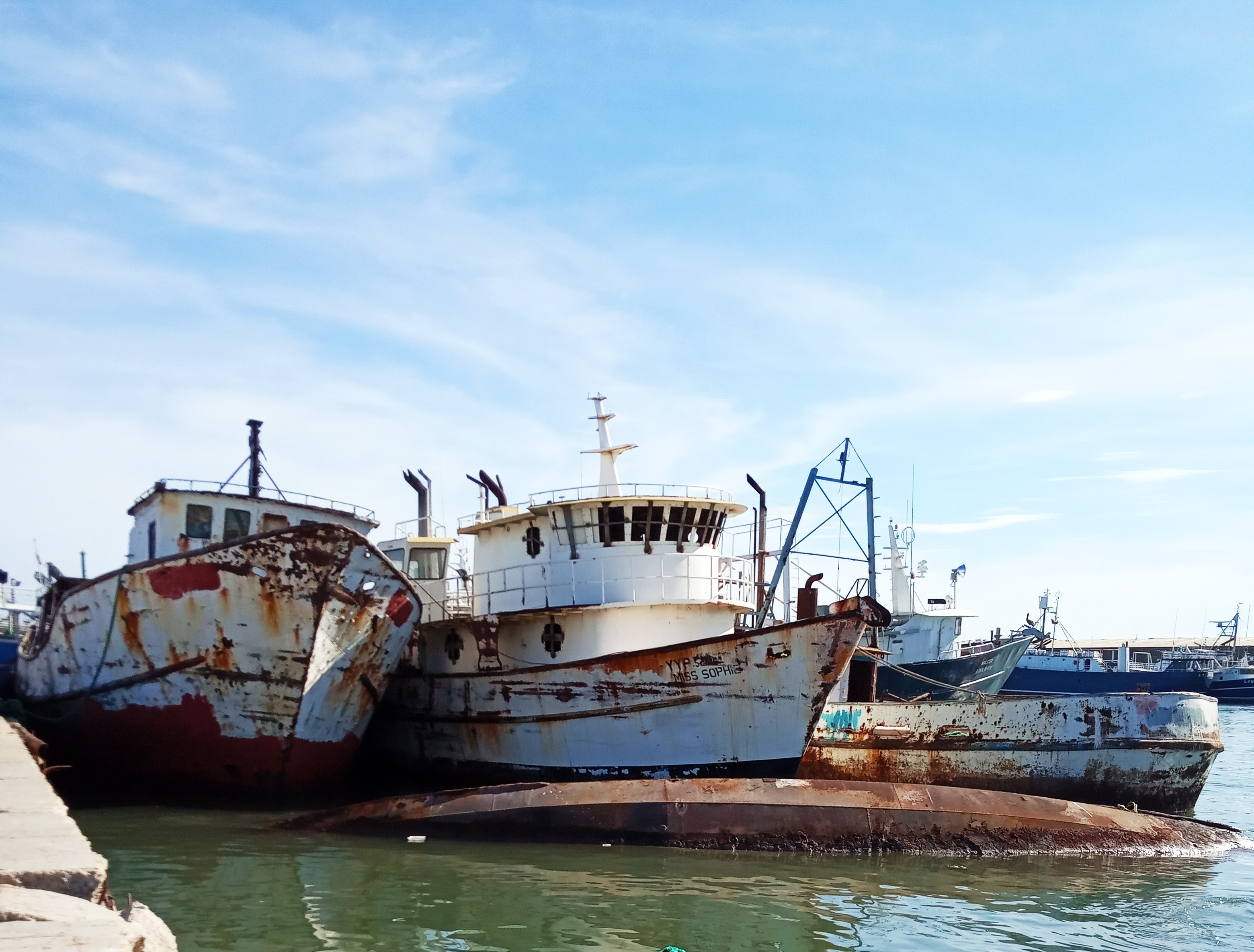 I want to share with you the following images of a marine space in Cumaná, Sucre state, Venezuela.
It is the site where the waters of the Manzanares River converge with the waters of the Caribbean Sea, known as the Fishing Market, a place of arrival for vessels that trade with fish at all economic scales.

On the microeconomic scale, the inhabitants arrive there looking for the best price, trying to jump the chain of intermediaries.

So, I arrive periodically, in domestic wanderings.

Once there, my eyes catch on to the images.

An atavism that I do not understand inclines me to look at the old things, in which time leaves a patina, fertile field for the imagination.

Looking at the boats, I think that these companions on the coast, forced by the tide to support each other, perhaps sailed together, traveling swiftly through the deep seas.

Once they were a source of wealth, of work.

Now they are scrap metal invaded by the inclement oxide (the chemical oxide and the political corrosive that we suffer today) that incline them like giants destined to lie at the bottom of the sea, without any use for great expectations, in the rites of initiation of his baptisms.

Capturing the dignity in this image I can not but remember the tremendous ideas of which the tango Nieblas del riachuelo is composed. The theme was written by magnificent composer Enrique Cadícamo in 1937.

“Moorish anchorages where they will arrive,
ships that never set sail on the dock,
shadows that lengthen in the night of pain,
shipwrecks of the world who have lost the illusion ”

It does not take much imagination to project in these images the idea of impotence, defeat, failure to face the adverse conditions of human life.

Bridges and ropes where the wind comes to howl,
coal ships that will never set sail,
sad cemetery of the ships that when dying,
they dream however that they have to leave for the sea ”.

With that feeling of failure, of defeat, of which these sad ships are symbology, my city waits, still waits, contained by the mountains that keep it and wet by the blue illusion that its sky and its sea maintain every day, like a message of the fierce destiny.

Time will have to pass, a lot of water will take the Manzanares River to the Caribbean Sea, until the humble men who wait today, patients, in the rigors of a survival economy can rise above the irritating drowsiness of a mediated population to resume the roads of proactivity

The time will come and we will see the innumerable steles in the sea return and we will know, past this time, that in the proverbial simplicity of the Eastern man there will be a historical mark. A life lesson.

Therefore, with Cadícamo I say, "amarrada al recuerdo yo sigo esperando", "tied to the memory I keep waiting"

For us Venezuelans, our ports, ships, in their current state, are not a mere economic data, but the testimony of an impact, of a crisis, economic, humanitarian and political, immense.

Meanwhile, while the best winds arrive, we use beauty, unattainable for evil.

The photographs were taken with my Xiaomi, Redmi, A6 Brand mobile phone

I like old things, I think the patina of age on a thing is interesting and I find myself wondering where that thing has been, what it has seen. I like your pictures and text which help to bring them to life. Great work.

You're welcome. Yes, it's interesting to imagine the story...Maybe frustrating to never find out the truth of it, but interesting and probably entertaining too.

Thank you very much BDvoter Team, for selecting my publication. I am honored by this selection and committed to follow them.

What a treat!
My imagination flies with that chocoloate cake.
Very grateful to you, @helpiecake, for the healing and reestam of my work.