Watersports: From a List of Things That Annoy Me 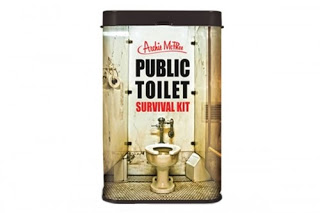 I was in a public bathroom the other day and the sit down toilets were automatic flush. I can understand the need for these because many people don’t dispose of their internal edible digestive-tract overload properly. But these automatic toilets flush at the most inopportune times.

If you have never experienced this feeling, consider yourself lucky and make a donation to a third world charity with the hopes that they don’t give them these toilets.

When it’s clean up time, and I know that my posterior-maximus has been thoroughly drenched by the aforementioned bacteria trap, I know I’m popping up as soon as I can. I’d rather do my cleanup standing. The toilet paper dispenser is mounted at knee level as if I had a Lazy Boy and the sports section in there. When I lean over to get some paper, the contents of my shirt pocket inevitably spill out into the bowl-o-surprises. Now I feel like Indiana Jones when he’s deciding if it’s worth burning his hand to get that wooden cup thing.

I graduate to the sink area with my shirt sleeve wet and my buttocal region feeling like a rain forest. If the bathroom designer has ever scooped his glasses out of the toilet, I know he’s never used the sink. The sink is the nemesis of all nemesis. I’d rather fight one of the real guys from the UFC than go play the sink game. But I’m short on options so here I go. I’ve used sinks before and I feel confident I can conquer this sink level. But the closer I get, the more confused I get. Is this the twist on or is one of those spring loaded contraptions built by sociologists just to test how we react to confusing situations where you get a mist of water before it shuts off? I’m waving my arms in front of it and running my hands over it like I’ve got three wishes coming. Faucets suck.

Old-time bathrooms have that cloth towel thing that would rotate around as you pulled it so the germs can get evenly dispersed over the surface of the towel. I imagined someone in the ladies room having a towel-tug-of-war with me. Newer bathrooms have either the automatic hand dryer of the automatic paper towel dispenser. Let’s tackle these one at a time.

With the hand dryer, you are supposed to rubs your hands under it vigorously until your hands are dry. I do this until I have to shave again. The paper towel thing isn’t much different. You wave your hands in front of it and the postage stamp of paper towels springs out. The assumption is that everyone’s hands are the same size and they are equally wet. I don’t know if my hands have ever been wetter than the next guy’s; I think you hit a point where hands have hit a maximum wetness. And water is the same formula wherever you go. Hand size is what gets me. My hands aren’t the largest hands; I can palm a basketball and hold my own with the greetings at any wedding, but the paper towels leave me feeling short-handed. And I have to wait a full prime-time-network-commercial-break for another round of paper.

All restrooms should have the same instructions – Step 1. Jamb hand against the soap dispenser until your hand bleeds and you realize that even though the window thing shows plenty of pink liquid, there’s nothing left – Step 2. Get the faucet to squirt out some water. Lots of luck with this one. – Step 3. Move to the towel dispensers - Step 4. Spend more time than it takes an egg to boil trying to get your hands dry. Although no one has ever left a bathroom with dry hands, you could be the Roger Bannister of hand drying and blaze a new trail of dry hands – Step 5. Give up after ten minutes and wipe hands on pants (don’t blame us – you knew you’d be doing this anyway) – Step 6. Grab the door handle as you leave and get someone else’s germs on your hands because they decided not to waste half their day washing them.

I’d love to say this is a cynical approach to public restrooms but I have gotten a whole lot better; you should have met me a year ago. After having this conversation with my therapist, I was banned from his bathroom. And he makes me break the pills in half now