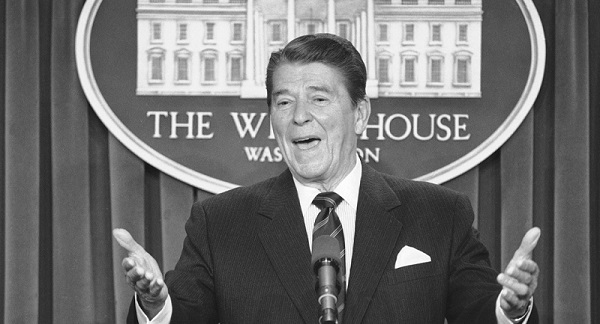 It's silly to think that there was a time when being 1 trillion in debt was considered a very bad thing that needed to be rectified at all costs. It was a time when people were a bit more conscious of that sort of thing and I don't know what has changed in the meantime because The United States is already well over $20 trillion in debt at this point and it doesn't look like anyone is really all that interested in changing that.

While I was too young to know about it, or to care, or to even have a concept of how massive a number like a trillion is, I do remember Ronald Reagan, because it seemed as though everyone liked him. He was a very charismatic person and he easily won both of his terms in office. I would later find out that one of the things that Ronald ran on as a Republican was speaking out publicly against deficit spending... only to do a rapid about-face once he was in office.

While Reagan's initial expenses were actually the budget of Carter, he didn't follow through on his promises of not engaging in deficit spending (imagine that? A politician that lies)
Reagan encouraged Congress to spend more on the military and to cut taxes and this resulted in increasing the national debt nearly 200% during his time in office. Ouch, that's pretty bad right? Well, the people after him didn't do much better. Keeping in mind that I wasn't alive for most of the left part of this chart it kind of seems as though we were a bit more financially minded back prior to the late 70's. A more of a "live within our means" type of nation. The various parties will throw this statistic or that out there and twist the numbers to try to make Bill Clinton look like a saint and demonize W Bush for their spending but the fact of the matter remains, right around the early 80's the leadership of the United States stopped giving a damn about out-of-control spending.

The United States hasn't seen a budget surplus (taking in more tax than they spend) since friggin Dwight Eisenhower was in the White House in '57.

Gerald Ford and Jimmy Carter were no saints in this department, but Reagan started a really bad tradition in politics that continues to this day. It really doesn't seem to matter whether or Donkey or an Elephant is in the big office, spending with reckless abandon seems to be the name of the game on all sides.

If, as a politician, you dare speak out against spending, like Ron and Rand Paul did, you get labeled as a lunatic who wants to take away the free stuff - I mean, how insane is that? source
Sadly, it is higher than this now

These days, whenever you hear a politician from any party other than Libertarian speaking, all they do is make promises about changing this and that, or cutting taxes for various segments of society, or providing "economic stimulus" packages, or various other programs like free college and healthcare etc, but you don't really hear anyone talking about how any of this is going to be paid for.

Even more, you don't really hear anyone talk about how even if we added absolutely nothing new as giveaways to entice voters... anyone who takes on the office is going to be staring down the barrel of an immediate near $1 trillion loss each year, before they even try to deliver on any of their economically-impossible promises.

source
at what point are we not even capable of paying the interest anymore? Maybe that's when a Libertarian can get elected

Telling people that we either have to cut this or that or that people are going to have to pay more taxes doesn't exactly win votes, so I think we are going to see this tradition of promises and crafty lies continue in perpetuity.

I'm not trying to blame a party as I am not a fan or a member of either of the major ones, but if you look at any chart it is pretty easy to understand that right about the early 80's this debt line began an upward trajectory that it is extremely unlikely to ever recover from - it's just gone too far.

While borrowing on the part of government certainly didn't begin with Reagan, it hit a milestone that taught a lot of people a new word, an amount of money so staggering that you could take the combined wealth of the richest individuals in the world and not even make a dent in it.

It would really bet interesting to see how different things would have been if Ross Perot had won. I think he had the financial mind to do some of the things that people were hoping Trump would actually do. I think part of the problem with the 80's was the cold war and if there had not have been that fear, not as much spending would have been done towards the military. Realistically, it was probably our "need" to police the rest of the world that ultimately got us into trouble. Don't get me wrong, I am not an isolationist, and I do think we need to help out when civil injustices are being committed, but we are seriously sending a lot of money to places we shouldn't be. I think a lot of people throw the word Trillion around, but they don't understand the actual enormity of that word.

This blog has a good depiction https://www.kamcityblog.com/2011/11/trillion-here-trillion-there-soon-we.html

Ol' Ross Perot. There's more to the story with that guy. I seem to recall a point where it was looking like he was going to win the thing and then out of nowhere just decides to drop out. I think one day there will be an expose about the dirty behind the scenes type deep state stuff that was introduced into play during all that.

I hadn't considered the Cold War, but still, that had been going on for quite a while before Reagan was in office and it ended while he was there but the money just kept flowing out.

For sure! It was probably all the money they spent on the drug war :)

I would love to see the deep states most dirty of laundry aired, only thing it may be too ugly for some to believe!

My dad voted for Perot! I was in the 6th grade! lol

It is depressing reading as it is out of control. We had a Zuma that took all the coffers and let nothing for the next President to spend. That could be a worse scenario for anyone coming into office as there is nothing but petty cash.

well why not just spend money that you don't have? (kidding.) Imagine how different the global landscape would be if all governments had to operate without a line of credit

I would love to be around to see that. The Government can't borrow more money otherwise we end up in junk status. They are getting smarter on how to fleece the little we have. Could do a Zimbabwe and just print some more and then it is all cool and fixed.

Interesting chart showing that whenever Republican increased debt dramatically while ever Democrat stabilized it for the next cycle (without judgment just observing). This means a staggering increase in debt with trump. Any numbers on this maybe?

that's what you got out of this? I would imagine that it is very easy to find that information about Trump online :)

Just look at the trend, Obama achieved the increase in debt to stagnate at the end of his turn...

Yes it took him a term to turn around Bushs debt increase trend. Btw got a lot out of this post, just commented on the most interesting chart for me - the rest wasn't new for me. Still very nice to read your post ;)

yeah i hear a lot of politicians claim that they "inherited" the debt but in reality all presidents only inherit around 8 months of a previous president's stuff. I think what we are looking at now (and will continue to see) is that a trend started in the early 80's that forever changes the landscape of the presidency in the United States.... One of excessive spending to keep the masses happy with very little regard paid to the future consequences of said actions.