Up to this point the Allies had made tremendous headway in turning the tide of the Great War as advances were being made on both the Eastern and Western front. However, Germany was able to repell all attacks into their home country until today. It happened in one of the western-most cities near the border of Belgium and the Netherlands in a city called Aachen.

Aachen was not an important city on its own as it was not a producer of anything militarily. However it was an entry point into the Ruhr area beyond and this is where a large portion of Germany's military production took place.

The city was a piece of a very complex and organized defense referred to as the Siegfried Line which covered nearly all of Germany's western border and consisted of pill boxes, artillery forces, and extensive minefields. 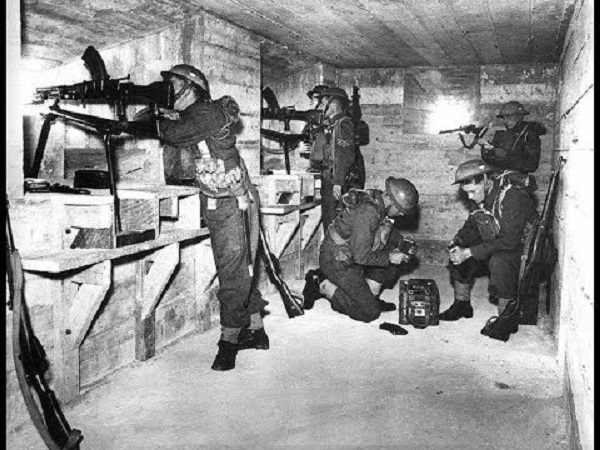 Based on the fact that Germany had suffered tremendous losses in France recently, and the fact that the Americans were fresh and highly outnumbered the German troops in Aachen, the American commanders thought they would overrun the city quite rapidly and continue the assault to the areas beyond. That was not what happened at all.

With 100,000 soldiers vs an estimated 13,000, the Germans were able to hold the city for 19 days before eventually surrendering on the 21st of October. They were able to accomplish this by having a defense line that at times were 10 miles deep and filled with mines, barbed wire and anti-tank "traps." The above item was particularly helpful. It is called a Czech Hedgehog or caltrops although I believe there is another name for them. Their purpose was not to destroy anything, but if a tank attempted to cross them, it would almost certainly get stuck and being stuck in a tank, is never a good thing. An aggressive tank commander could actually impale the vehicle on top of one of these, although that was very rare. These defense lines were extremely heavy and difficult to move, even firing artillery or other explosives at them seemed to have little to no effect.

The U.S. advancement was further delayed by a tactic the Germans had learned (by doing it incorrectly) on the Eastern front - withdraw troops and especially armor resources to the interior of the city. This made advancement on the part of incoming tanks extremely difficult due to tight quarters and subjected the incoming soldiers to a very slow (and deadly) advance.

The city was considerably more difficult to take than anyone on the Allied side had predicted but when it eventually fell, it was a relatively momentous turning point in the war. This was the first German city to fall and the rest of the western defenses were now kind of irrelevant since the door had already been kicked in.

Both sides suffered heavy losses of about 5,000 casualties each. Most of Aachen was completely destroyed due to days of heavy bombing and constant artillery assaults. Thankfully most of the 165,000 or so civilian population had been evacuated since it wasn't exactly a big secret that this city was a target.

There would be many difficult battles to follow, but the fall of Aachen was an important one as it showed Nazi Germany that they were now and would from this point forward, be on the defensive until the war's conclusion on May 7th of the following year.

Very interesting! I don't have a big fancy comment for this one. It was just a well written and very informative post. Thanks for sharing :)

I'm a big fan of World War 2 history so when that is the topic of the day I normally end up learning something as well. This one took me quite a while to write because most of it was news to me also. I think this battle kind of gets glanced over because it wasn't very well-executed and was momentous only because it was the first city taken.

It makes sense because it also gave them a conduit to run troops and supplies into the interior of Germany. I can see how it would be a pretty significant win.

of for sure. That much is evident. I guess they were disappointed that it took 17 days longer than they had hoped and 5,000 casualties. You know, war is awful and what not and we talk about how awful the Nazis were but they participated in evacuating the populous because they knew a major assault was about to happen.

I don't think people bother with stuff like that these days, especially whoever is defending, so they can blame the attacker for killing civilians.

Yeah, for sure. I think it is probably important to point out that they evacuated German citizens. I am sure if there would have been other nationalities living there they wouldn't have taken such care to make sure they were safe. It is sad to see the amount of collateral damage these days and how nations use its citizens as a shield or for political gain.

I agree. And it was a historic day for sure

oh...this bloody bloody war...
every piece of our land is full of soldiers' blood and their families' tears..
so few veterans are still alive.. in my city there are not more than a dozen of them. of those heroes who saw this war by their own eyes... alive legends.

I know that many historical facts and events are described in different ways in many countries. it was shock for me. I wonder if it touches this war too.

On steem, have crypto?

This group https://goldvoice.club/steem/@fyrstikken, They are hacking people that enter this discord server https://discordapp.com/invite/sqxV63P . Once you are hacked they profile you long enough to know all of your activities. They introduce workplace gangstalking visits and bring it to your attention cleverly and discretely so only you get it. They are very covert and tricky with everything they say and do in this server. Some claim to have worked for or are working with the FBI and the NSA. Mixed with decommissioned traders and coding criminals, Its a scary mix of creepy people and their intent is to drive you crazy and deplete everything you have ever acquired in life, even your freedom.

My hacking started with them introducing ransomware that has options, dump my coin or delete my system drive. They acknowledged this to me in the server as it happened.

If your an agent Investigating them, guess what? You are circumvented. They are high tech, over funded and well connected.

Aachen was definitely a town they had to hold to give the rest of the Germans to prepare for what was going to come afterwards. The three weeks or so was more valuable than the 20 odd thousand troops that surrendered. Great piece and a good read. I love war stuff.

I've never been to Europe but would love to go one day. One can only hope.

I too, love the war-history stuff. When a day comes by that and it is an momentous WW2 (in particular) date, i get excited because i know that I am going to learn some stuff as well.

You are in for a treat when you do go as there is just so much that has been turned into museums now. All of them are privately owned by the farmers and land owners and there is stuff everywhere. Every time I go there is more things added as farmers find more things. Loads of things were covered up and buried and they are now being dug up.