Today in History: Boxing and Bombs 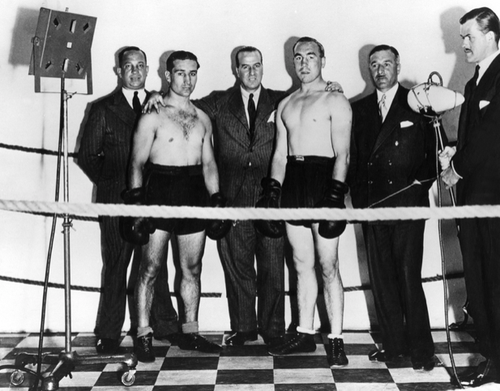 Today is the birthday of two things both of which involve violence. One of them lead to the popularization of one of my favorite sports and the other lead to 40,000 people getting killed. They both are pretty important even though obviously one of them shouldn't be celebrated.

The first boxing match ever televised

Ever heard of Archie Sexton and Lauri Raiteri? No? Well neither have I but they were the fighters on what was almost certainly a very very small screen that was difficult to see and wasn't owned by really anyone at that point other than the super-rich, who at that point in time probably weren't very interested in boxing.

It aired on BBC and was a 6-round event. I don't know much about attendance or whether anyone cared at the time but it doesn't change the fact that it was the first!

One of the really interesting things about this bout it Archibald Sexton's fight record by the time he finally retired. The man finished with a record of 172-30-22 for a total of 224 fights. The man did over 2 THOUSAND rounds in his professional career and we would presume that he did quite a few other rounds while sparring. That is an insane amount of fights. What did he have a bout every other day or something? He only retired from boxing because an in-ring injury caused him to lose sight in one of his eyes.

Archibald later went on to be involved as a constable during WW2 and was awarded some sort of medal for rescuing people who were trapped in an air-raid shelter... ironically located beneath and eye hospital.

So I'm thinking Archie was probably one of the toughest people that lived and unfortunately his life wasn't long as he died from a stroke at the age of 49.

The Battle of Stalingrad begins

This story has a significantly different tone but since it has "grad" in it that is normally the case. This battle should be etched in everyone's minds as far as World War 2 is concerned because while most people like to point over at D-Day and say that it was the turning point in the war it was more than likely this battle, which lasted nearly 6 months and exhausted the German supply and demoralized its forces, that likely was the real culprit in turning the tide of the war. It is considered one of the bloodiest battles of all time resulting in nearly 2 million deaths overall and the very first day was not an exception.

Today in 1942, around 600 Luftwaffe aircraft performed a series of bombings that indiscriminately targeted the entire city. The Soviets had plenty of time to prepare for the obviously approaching Nazis but in a show that might have been heartlessness or simply patriotic resolve, almost none of the civilians were evacuated. Perhaps that is why the first night had such an atrocious death toll. 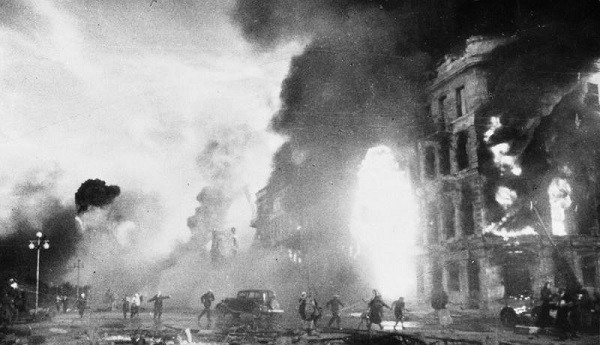 In the first 48 hours it is estimated that around 40,000 people were killed as the German Luftwaffe, which was the most advanced air force in the world at the time, dropped over 1,000 tons of bombs on the city, reducing much of it to rubble. They were quickly augmented by armored units but the battles soon became very close quarters and the bloodshed was immense over very small parcels of land.

I have to admire the Soviet resolve because before the battle even began they shipped out most of their livestock and grain, thus creating a food shortage before the battle even begun. Civilians fought in the stead of fallen soldiers and there is a story about tractor factory in the city, whose building was half destroyed that continued to manufacture makeshift tanks for the USSR right up until the moment that German soldiers burst through the door.

The Germans had complete air superiority and would continue to do so even after the Russians reinforced and eventually starved out the invading Germans who eventually surrendered in February, starving, freezing, and nearly out of ammunition.

Why this medium sized city was so important to Hitler I do not know. However it might have been his arrogance that would not allow him to retreat even after it was apparent that this battle could not be won this far away from Germany. German, Romanian, and Italian casualties were well over 500,000 and this was a very large portion of the Nazi war machine. A tremendous amount of equipment was lost as well including 900 planes in battle and 744 were captured. They lost an astounding 150,000 rifles and 6000 pieces of artillery. Over 2 thousand tanks were destroyed or captured.

You really aught to look at this battle more. Maybe it is just my American education but it is barely a snippet in the history books but is such and intriguing and horrifying incident of immense loss of life. If you can't stomach things without entertainment value, Perhaps check out Stalingrad the film to get an idea about how dire this battle truly was.

Anyway, that is what happened today all those years ago. I went off on a bit of a ramble with the WW2 stuff but that is just because I am a big fan of WW2 history. Hope you learned something!