There are probably a thousand restaurants in Chiang Mai, maybe more. The obvious values such as street food are evident, but if you are looking for something a bit more comfortable and upmarket, the stuff in the city center can drain the ol' wallet pretty quickly. The restaurants that are just out of downtown a bit see dramatic increases in ambiance and reduction in price, and I am sure this is a global phenomenon.

This establishment focuses on Northern Thai cuisine which makes sense because Chiang Mai is about as far north as you can possibly go in this country and still be in the country. The menu is a bit long and it is really easy to navigate in English. They did do something a bit strange where they don't actually say the name of the dishes transliterated into English, which for a tourist is just fine but for me (because I do know the names of dishes I like) it was actually more confusing and I reverted to reading the Thai. 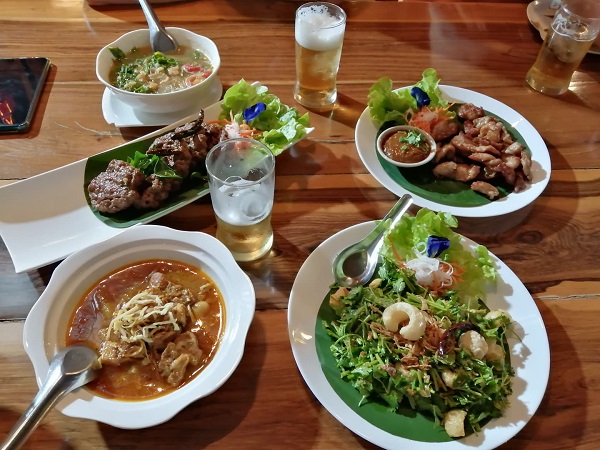 The dining style like most restaurants here is "family style" in that generally you order dishes for the entire table and share them. It isn't really an establishment where you would order a main dish just for yourself. This is pretty much the norm in Thailand. Each of these dishes were around $2-$3 each, and the beers were around $3 each as well (large), so Lum Dee is definitely considered affordable.

If you have kids this is a great choice because they have a large playground on the ground floor with a giant slide that enters from the restaurant. I don't generally enjoy when kids are at restaurants but at least this place had the foresight to put them "down there" where the screaming can be kept at a distance but you can still monitor them to make sure they don't die. There is indoor and outdoor seating and it's up to you where you want to sit unless they are really busy. Generally, people sit indoors during the day to avoid the heat and will sit outdoors during the cooler night especially during the "winter" period we are in now. 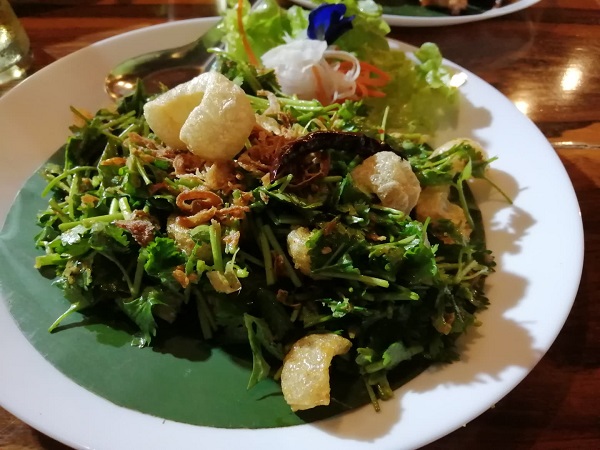 This was my favorite dish and unfortunately the closest I can tell you about what it is called in "Yum Pak Chee."

Our total bill for 3 people with 6 shared dishes, a big pot of rice, and 3 large beers came to 825 Baht (around $27.) This is certainly more expensive than eating at the market eateries, but there really isn't much of a comparison in quality or comfort... LumDee is definitely worth the tiny bit extra you have to pay.

The reason why I say it's "Kinda worth going to" is that if you have your own transport, i would highly recommend going to this place. I don't really think it is worth paying the extra for a taxi to get there - it isn't special enough for that. Since it is located around 5km outside of town on a highway, it is impractical to consider walking there, even you are the exercising type.

They also close pretty early (9pm) and will not seat anyone who arrives after 8:30. The bills will be distributed at 8:45 and you will be expected to "wrap it up and be on your way!" at 9.

We have few restaurants that I can boost of in Nigeria as well, particular canteen owns by igbos . Different meal like pounded yam with egusi soup and ogoro, which is called palm wine in English.

What a nice restaurant! Its name made me laugh! I couldn’t pronounce it! LoL
Very nice looking food!

Hahaha. You are in good mood today!! Your comment about the children was funny! Great review!

I love your food review posts as you end up having interesting stuff normally.Can't wait to one day try some of these dishes as everything just looks good.

This looks like a pretty interesting place. The pork dishes look fantastic! I think I would like the honey one and the first one you mentioned in the picture very much! That is also a very interesting policy they have for the bills and closing time.

i wouldn't say they were aggressive about us getting out of there but it was pretty evident that it was not optional. you had to go. I was fine with it because once i went down the kiddie slide the playground below once, there wasn't really much else to do.