How to get ripped off by a taxi in Da Nang, Vietnam (sad but true) I've lived in South East Asia, mostly in Thailand, for a long time now and I like to believe that I am pretty well-versed in avoiding scams. However, my very first experience in Da Nang was one of getting ripped off and I was even on my guard about it. I'm not even that mad and kind of admire the intricate nature of this particular scam. PS - it wasn't for very much money.

Getting overcharged in a taxi at an international airport is nothing new and no, it is not specific to South East Asia, this is a global phenomenon so don't think i am singling out any particular nationality other than my own. I am ultimately responsible for being duped by this guy.

With apps like Uber and over here it is called Grab, it is increasingly difficult for taxi scammers to get away with it. However, when i exited the international terminal I saw that no Grab drivers would accept my ride even though it was being displayed as a fare of 110,000 VND to my destination.

A taxi guy saw me and I was polite but said "No thanks, I'll get a Grab" to which he responded that he would give me the Grab price, no problem. I showed him my phone and now that i think about it, he didn't even look at it and that was the problem. I should have gotten a verbal confirmation from him before I sat down in the cab.

We got in the cab and he drove and everything was normal until we got to my hotel and he pulled up HIS Grab app to show me what the cost was, and it was 5 times the price of what mine was saying. His app was legit too.

Apparently, there is this one section of the airport that getting a Grab is tremendously more expensive and is designed in a way that it appears to be specifically to rip off travelers. Even when i pulled the area up that he was referencing on my own phone, the price still 5x the price.

I refused to pay that much but i really wanted my first day in Vietnam to not involve me testing out my recently acquired hand-to-hand combat skills so we kept it professional and calm and eventually I ended up paying him 200,000 VND, which is still a lot for this ride but far less than the 500k he was asking for (and the Grab app confirms, in fact, is the price.)

Here's how you can avoid this 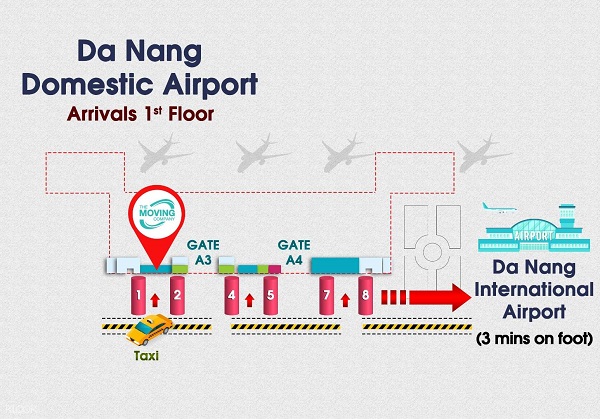 Since the Grab app is apparently "in on it" as far as this one zone of scam is concerned you simply need to walk a little bit down to the domestic terminal and yes, it is merely 3 minutes just like the above map suggests. The arrivals and departures section of that part of the airport has LOADS of Grab drivers in wait and they will honor the 100 to 110 thousand price.

This is surprising to me that the app makers are apparently in cahoots with the scammers but only at the international terminal. Perhaps it was part of a concession to prevent some sort of backlash from the drivers.

I'll just chalk it up to life experience because they will never get that from me again. Live and learn I suppose and at least in this situation the rip off only ended up being for $10 or so. I just find it unfortunate that these fellas would tarnish their name in order to make a little bit of money but then again, there are gonna be more suckers that walk out that door completely unfamiliar with the currency many times a day.

I'm not complaining, i just think it is funny that it would happen to me when after all these years of living here I feel as though I am more tuned-in to these sorts of things than the average tourist.... apparently not.

Well, that sucks some fat ass. Sorry to hear about this happening to you, man. Even if it wasn't a huge amount or anything, it's still pretty shitty.

yeah it wasn't a great welcome but it has been smooth sailing since then. Like i said to someone else, either I look like an unlikely mark because i don't dress nicely, or this seems to be a relatively hassle-free beach area. You better yet?

Yeah, I've got a few more days of anti biotics left but overall I'm doing a lot better. Just in a bit of pain here and there throughout the day.

There always seems to be new twists, on old scams...making it difficult to keep up with them.

Hope the rest of your stay in Vietnam is not so ugly.

nah, it's been fantastic other than the intro. Unless I look like a bad target I haven't really been hassled here at all and in that regard it is very different from most of the other beach cities i have been to in South East Asia

Glad to hear that. I hope you have a happy visit there in Vietnam.

yeah, that could be. I thought the app was so much of a savior i forgot the golden rule of never getting into a cab until the price is agreed upon :) silly me, totally my fault.

I think you were very unlucky. I have just finished a 6 month stint living in Da Nang. I have to say it is one of the most scam free cities I have lived in, during my last 6 years living in Asia.

In complete contrast to your story I was only telling a friend yesterday how unbelievably straight forward it was leaving Da Nang airport. This is my story.

After paying the $25 stamping fee (Government fee, not a scam) I got a smile from the immigration officer and I nearly collapsed. They never smile, not unless I am giving a bribe at a land border.
After collecting my bags I declined the over priced SIM cards and thought I would take my chances with the airport WIFI. I found a weak signal next to door 1 on your map (above). The WIFI just about connected with the Grab server and my driver was on his way. Unfortunately I had no telephone number for him to call me on. Luckily it was a blazing hot Tuesday afternoon in the middle of June. The airport was dead, and the driver found me.

One thing that surprised me about Da Nang airport was that not one taxi driver bothered to walk up to me. maybe it was the heat.

As for Da Nang it is a great little city. The beach is great, there is a lot of construction. But I found a nice quiet apartment for $170 a month a short walk from town.

I found Da Nang to be a great city to hang out in and do some work. The locals are super friendly and I did not encounter one scam in my 6 months living there.

I am sorry to hear you had a problem at the airport. Da Nang is a great city and I will post a full report in the next few days.

That is very interesting. It is also good to know that things like this can happen to even seasoned travelers. It will probably help out a lot of other travelers that might think they just aren't cut out for this sort of thing. I remember paying an insane amount for a Lyft ride one time, but we were in the middle of Detroit and my wife was freezing. We couldn't get any Uber's and she was finally like I don't care what it costs, I just want to be warm! If it had been Summer we could have easily walked the couple of blocks. Thanks for sharing this, I am going to resteem it.

Amazing that the app has allowed that to happen but then again that is why they are all using the app most likely. Taxi drivers have been known world wide to try and make an extra buck whether it be by taking a longer route or other crooked means. You are street wise when it comes to this stuff and what chance do we have if you got caught out. Good to know though and one tip for the memory bank.

Sorry to hear that happened. I know when I'm watching travel videos they do stress these types of situations, but you never know who you can really trust. Thanks for the outline. Happy Tuesday Good.

Wow! What a great welcoming to your new home. Hope you are adjusting well. My girl and I are healing up quite well at a surprisingly nice resort in Phu Quoc Island with an Agoda special of just 6 dollars a night! Unreal. Nice swimming pool and all. Anyway, I'll be in touch and will certainly keep you posted when we get near Danang.

Aw man, that's such a bummer! We live in Da Nang. Sorry you had such a rough first experience here :( Hope it's looking up!

oh for sure. I loved everything else about the trip and am moving there next month. Just gotta be more vigilant towards the taxi fellas!

wow, you are very tuned in but that was a legit set up and could take anyone in. Just think how much they rake in with people who aren't familiar with the currency!