Every now and then we dine a little fancy 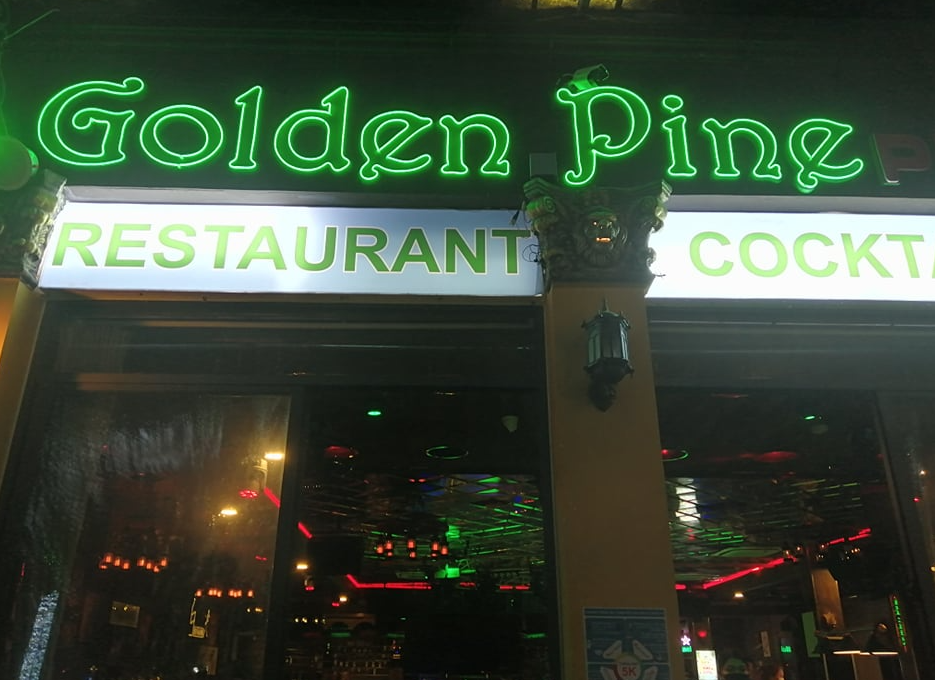 I live in a very affordable country but there a few exceptions to this normal rule of everything being exceptionally cheap and one of them is going out dining and somewhat fancy or popular places. These places aren't necessarily good but they are places to see and be seen and since I don't even own nice clothes I don't do this very often. Every now and then a group of friends ask me to go and I acquiesce.

Last night I don't even remember what the occasion was but we ended up on a riverside nightspot called The Golden Pine.

So the first thing I noticed was that almost no one was here and we had our pick of tables. We chose to sit outside because one of the members of our group vapes and really, unless you are a jackass that makes massive unnecessary plumes of smoke I don't understand why that isn't allowed inside since it smells like nothing. Anyway, one of the main reasons why we chose to come here is because me and one of my friends had been talking about how it is has been a while since we had fresh oysters and this place had them. 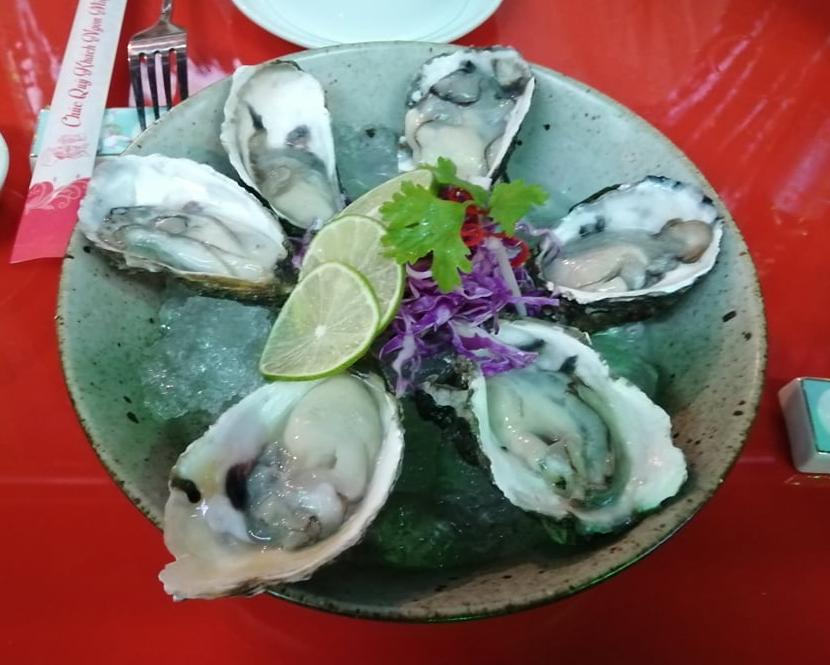 Some people love them, other haven't tried them, others are afraid of them for good reason. I'm in the category of I really dig them from time to time but if it was something I had access to all the time I would probably decline. Golden Pine gets high marks on preparation and presentation of this dish, because they were cold, a nice size and were shucked properly. We ended up ordering another round of this.

The place seems as though it is meant to be some sort of nightclub and we soon found out that this is exactly what the place is all about. 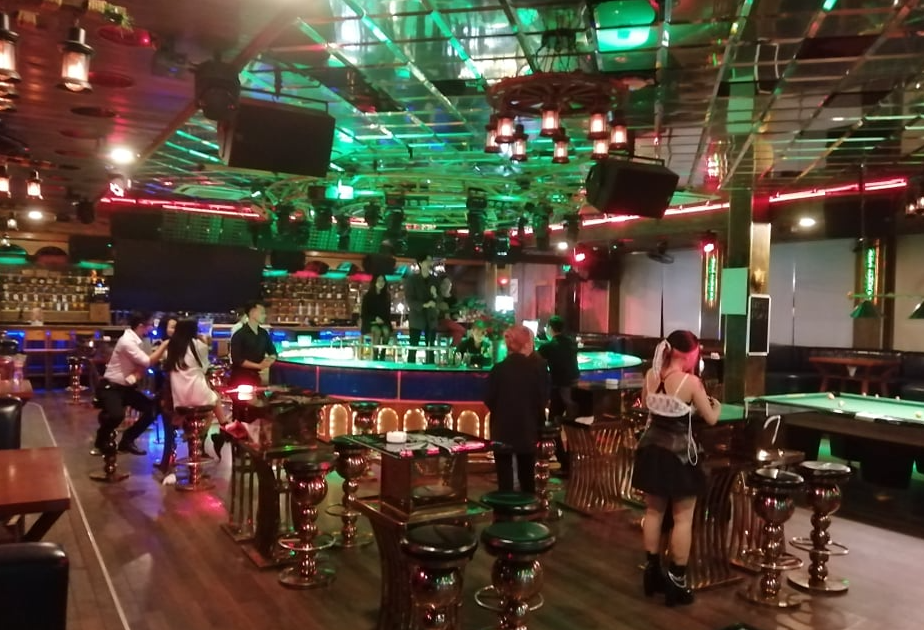 It wasn't long after our first place of oysters that this place was doing what almost all establishments in Vietnam doe and that is to play music at an absurdly loud volume. This would eventually be a driving force behind me leaving because honestly, I don't care how good your place is, if I can't hear the people that I am there with, I am going to leave.

Another feature of this place that I am guessing that a lot of the local customers like is that they bring a grill next to your table and cook your mixed platter right next to you and I suppose you could get involved in the process if you really wanted to. 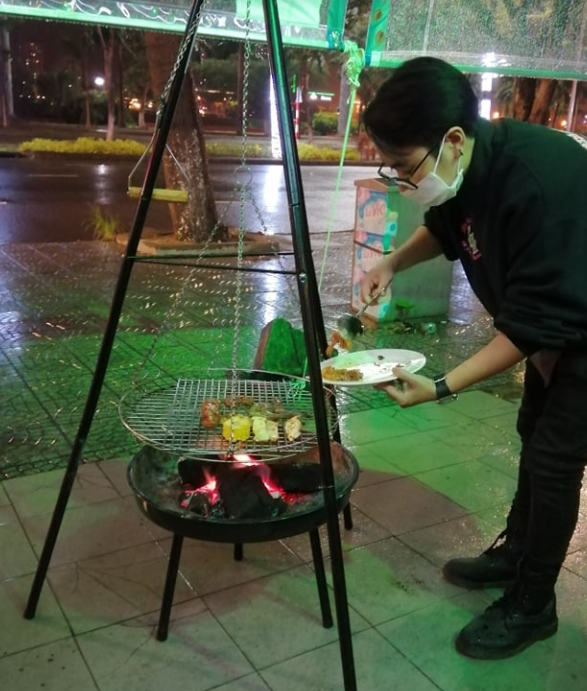 For me this is not a great thing. In fact, I don't think that anything that came off of that grill even tasted good. These waiters are not chefs and honestly, I would prefer that these things were cooked in the confines of the kitchen where they have access to better cooking materials. Maybe it is because people want to confirm with their own eyes that the food is clean because it certainly doesn't taste any better this way.

In the end this night ended up costing me 1 million VND by the time we finally left. This is around $40 US and that certainly is not a lot of money for a night out in USA but it is about 4 times as much as is normally necessary to go out for drinks and dinner with friends in Vietnam - at least the part of it I live in.

Unfortunately one of the girls in our group can't hold her booze and ended up making a scene and basically acted a fool and her boyfriend, who is one of my best pals ended up getting a taxi to leave early. I'm not interested in being a remainer in this situation so I went with him. It's a damn shame that some people's relationships can be upended by booze like this. It's events like these that remind why I am intentionally single :)

All in all I wouldn't say that this place was worth it. I have been out to somewhat lavish evenings in Da Nang twice in the past 3 months or so and I felt that way about both of them. I guess I am just a dive pub kind of guy!

I mean, to be fair, that's literally 75 percent of the people who vape here in the US. I imagine it's probably like that everywhere. Gotta rip those fat clouds, dawg.

i was talking to a guy that was vaping with a nice smelling flavor and at the beginning I said i much prefer this over cigarette smoke. It wasn't but a few minutes later of him basically creating a smoke machine type environment at our table that I had to threaten him with physical violence if he didn't get some courtesy in his step. I had just met the guy too, I think he was doing it intentionally to get under my skin because I was friends with his GF and had known her longer than he has. It's like he was marking his territory with his hipster plume. I am a lot bigger than him so he was barking up the wrong tree.

Thankfully he got the hint and cut it out so fisticuffs were not necessary.

Yeahhh. That sounds about right for someone like that. I would say it's a 50/50 split amongst people who have to constantly spew clouds out. They're either trying to impress everyone around them because they think it's super fucking kewl. (This is what I really run into in my area, lots of dudes in their early 20's who think vaping thicccc clouds is god tier levels of being cool.) Or, they know it's annoying as fuck to non vape users and they're getting off on pissing people off. So, I'd say you're probably right. Dude probably could tell it bothered you and figured it was an easy way to fuck with you.