It's a name that sticks in your head. When I saw it on gmaps it certainly caught my eye because it's a little bit nasty sounding. As it turns out that might have been a little bit (or entirely) intentional because this place is fantastic and is now one of my favorite hangouts in the whole city. Fortunately it is within staggering distance of my condo as well. Oh, and the place is not dirty at all, it was impeccably clean.

First and foremost, Dirty Fingers is a pub that sells food. They have a ton of flavors on tap and loads of booze choices from all over the world. The big feature for me is if you want to order Vietnamese beers, they are super cheap. I think the lagers from this country such as Larue and Saigon Special are just fine, so it works for me! 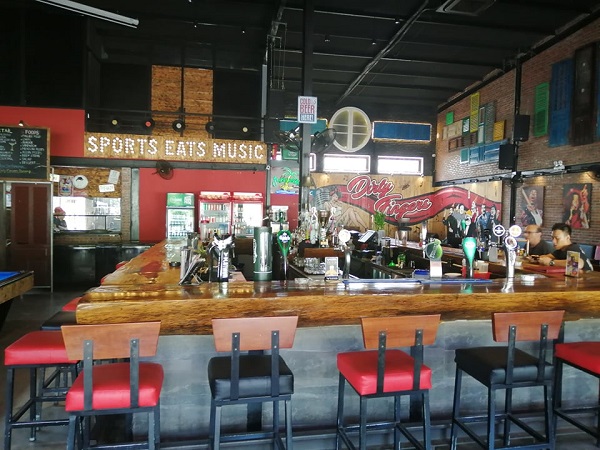 While there isn't hardly anyone in my picture, the place gets pretty busy and has some pretty great live music on that stage in the back there - of course that is not really what is happening now because it is kind of up in the air right now as to whether places are allowed to be crowded at the moment. The menu is filled with pub favorites at reasonable prices. They have all sorts of fried stuff with cheese, which is my favorite food. Chicken wings, jalapeno poppers, onion rings, and the occasion something or other that might be considered somewhat healthy such as hummus is on there as well.

While I did say that this place is cheap, this is only true in relation to the western world's standards. Compared to other such establishments in town, this is one of the more expensive places that you can go. To put it into perspective, I was there recently for a UFC event and sat at the bar eating and drinking for 3 hours. I had a reasonable amount of beverages and by the time I left I had spent nearly $20. This is still cheap, yes? It certainly is in my book. As hard as it might be to believe this is about twice as much as the same activities would cost elsewhere in Da Nang.

It's worth it to me to really break the bank and spend over $6 an hour here because the atmosphere and overall comfort is fantastic at Dirty Fingers. Overall, Dirty Fingers has established itself as one of my go-to places for food that you know is friggin terrible for you and a bunch of booze. The staff have been excellent in the 3 times that I have attended and I will definitely be back. Thus far it is one of the top places I have found in this city.

It's a nice spot and usually quite a lot of fun. That part of town though, not the best looking place in the area.

Are they still letting you go out there or is it banned? 'Banned' has not happened here yet, but I feel a lot of cafe's etc.. are going to suffer.

Most are empty now, the world is going to shit.

oh we can still go out (if i understand you correctly) but other cities in this country have bars banned. For now we are allowed to hang out still but places like rooftop discos and what not are banned, but I don't really want to go to those places anyway.

oh we can still go out (if i understand you correctly)

It is, some European countries have banned going to public places.., we have ghosts towns now.

of course it is better for everyone if we do this now. Well, if the virus is as bad as they say it is. I still don't know anyone that even knows anyone that has caught it... but i suppose that is the point

That is awesome that you have been able to find a local place that you can call your own. Especially given that it is within stumbling distance back to your home. I have always wanted a place like that where they know my name when I come in and I can just hang out. The problem with a place like that over here is you would probably pay six times as much for those three hours of enjoyment. Stay safe with everything that is going on lately!

lol..delicious food that is terrible for you plus cheap beer, what more could you ask for? It sounds great and that IS dirt cheap. I hope they stay open during the virus run.
Oh, and they're within staggering distance to your condo! lol. It's a dream-come-true!